The 'Uplift of the Tibetan Plateau' Myth

'The uplift of the Tibetan Plateau' is invoked to explain various phenomena, from monsoon dynamics to biodiversity evolution and everything in between. It's not accurate, finds a new paper.

The orogeny of the Tibetan region (Tibet, The Himalaya and the Hengduan Mountains) dates back approximately 200 million years, long before the arrival of India, and was the product of earlier Gondwanan tectonic block collisions that produced a complex of mountain chains and valleys. The review finds that the concept of an extensive low-relief Tibet, rising in its entirety as a result of the India-Eurasia collision, is false, and the product of overly simplistic modeling.

Previous stable isotope and fossil-based estimates of past surface heights were often contradictory; isotopes tend to record the height of mountain crests, while the fossils are more indicative of where sediments accumulate in valley bottoms. The isotopic bias towards uplands means that even valleys appear as uplands at the height of the bounding mountains and so appear as an elevated plateau, a result confirmed by isotope-enabled climate modelling. By combining well-dated multiple paleoaltimetric methods a better understanding of past topography emerges.

The formation of a complex topography, and in places thickened crust, before the arrival of India suggests that the formation of the Tibetan Plateau was not only due to the India-Eurasia collision and this has important implications for the amount of crustal shortening and the size of 'greater India' before collision. 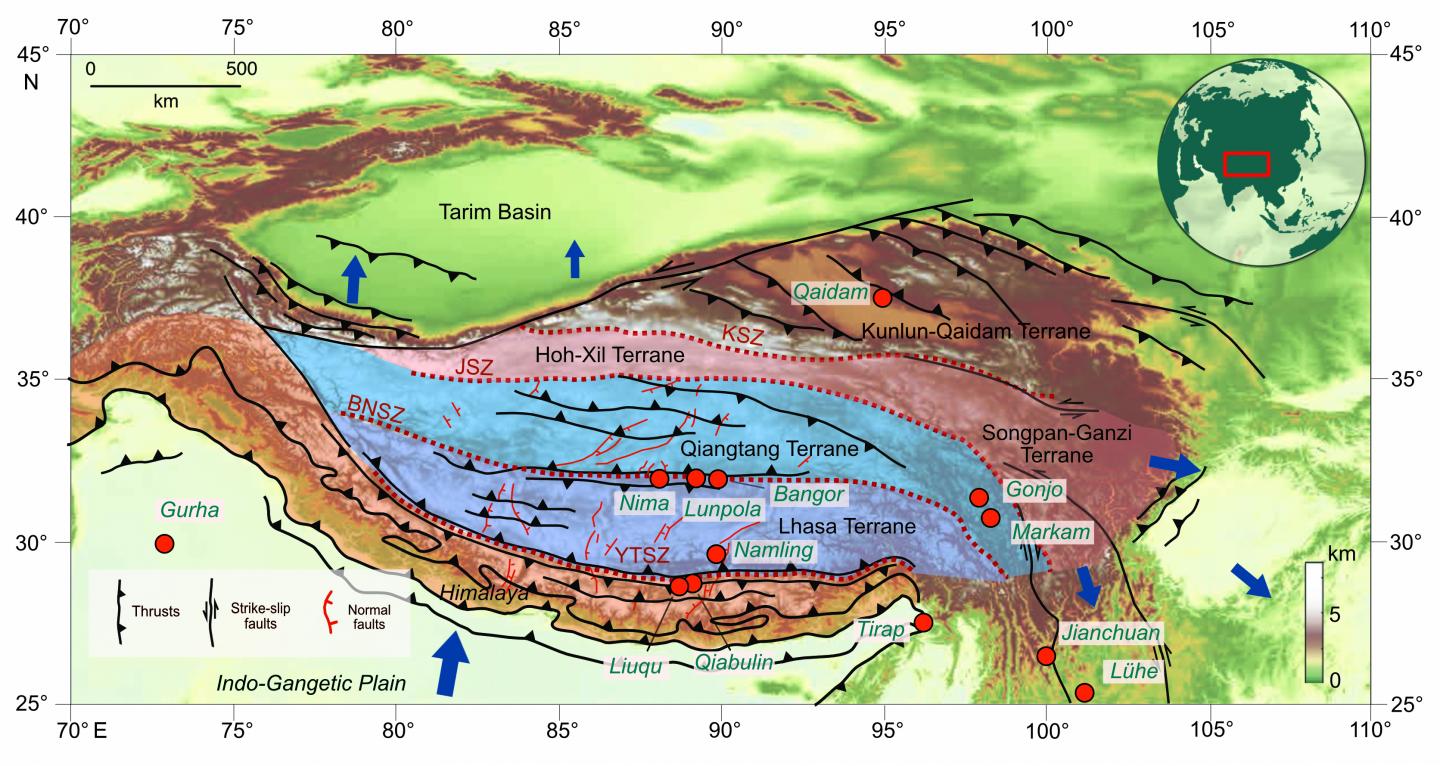 Tibet was assembled by a succession of Gondwanan tectonic blocks (terranes) colliding with Eurasia over a period of about 200 million years.

Previous work pointed to a rise of eastern Tibet and the Hengduan Mountains in the Miocene, but recent radiometric re-dating of key sites shows the region was elevated before plateau formation and the rise of the Himalaya. Uplift began in the Eocene in large part due to extrusion of parts of Tibet beginning as early as ~ 52 million years ago and extended into the early Oligocene, with landscape dissection through the expansion of river drainages taking place in the Miocene (subject to the dating being correct) as the monsoons strengthened.

The Himalaya began to rise in the Eocene, but only crested the pre-existing Gangdese mountains that already formed a 4-5 km high 'wall' along southern Tibet after the mid Miocene. North of the Gangdese, along the Bangong-Nujiang Suture south of the Tangula mountains, a deep ancient east-west aligned great central valley existed until early in the Neogene (approximately 23 million years ago) and later in its history was internally-drained. Numerous fossil finds show lakeside sub-tropical vegetation in this valley remained below 2.3 km above sea level for much of its history, the valley floor only rising in the Neogene to form today's flat plateau through ongoing tectonic compression from India and sediment infilling.

'Uplift' in geology relates to the rise of rocks and work done against gravity, so the infilling of basins by sediment to contribute to the formation of a low-relief surface means that Tibet was never 'uplifted' as a plateau, nor was that rise solely a consequence of the India-Eurasia collision.