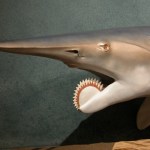 kthompson | July 24, 2009
The fear mongers over at National Geographic are at it again. They have released what they claim to be actual prehistoric photographs of nightmarish creatures. Just think of your most feared animal and combine it with either a cooking utensil or a wood shop tool. That might give you an idea of how National Geographic came up with these things. The CraftsMan-Eating Shark, known for its ability to sever the limbs of its victims with a straight or beveled cut. I smell "evolution" and I don't like it. I came up with one of my own: check out the rest here.

bleimanb | July 17, 2008
Brits of all shapes and sizes have been spitting out mouth fulls of tea and shepherd's pie at the announcement that a strange unidentified insect seems to be running rampant across England, including London. The black and red bug resembles the Arocatus roeselii, a rare central European insect, only Britain's bugs are significantly duller in color. It's not every day that an unknown species emerges in the center of one of the oldest cities in the world. Click here to watch an informative video on the topic. London's Natural History Museum will be analyzing specimens of the bug to determine…

zooillogix | May 3, 2007
Scientists are "baffled" by the discovery of a strange worm-like, serpentine creature off the cost of Juno Beach in Florida. Diver Jay Garbose caught the 7-10 foot creature on film as it slithered around the ocean floor. Watch his astonishing video footage.Unidentifiably delicious! Garbose has dubbed the beast "the living intestine" because of its smooth, tube-like features. Some have ventured to say that it is a newly found species of Nemertean worm, but for now the Smithsonian Institute is labelling it "undescribed"...creative.

zooillogix | March 15, 2007
A new species of clouded leopard was identified today in the jungles of Borneo. In fact, over 400 new species of animals have been discovered in the rain forests of Borneo since 1994. Most of the species shown below were found through the World Wildlife Fund's (WWF) spectacular Heart of Borneo Initiative.Bornean Clouded Leopard, neofelis diardi Catfish with suction cups on its belly and protruding teeth Lizard - new species of skink (By far our favorite), Unidentified "Mystery Mammel"
Advertisment