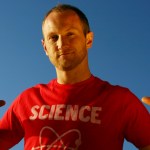 dr. dolittle | October 10, 2012
I just watched a funny entry submitted for the 2012 American Physiological Society's (APS) video contest on some of the differences betweens humans and dogs. The authors of the video were Nate Brault and Thomas Szamocki from Beloit College. It is also available in the APS Archive of Teaching Resources, a searchable archive of teaching resources and activities to help teach K-12 as well as college students about physiology.

cagapakis | May 4, 2010
So I had this great post planned about the Boston aquapocalypse but by the time I managed to get some water samples to the lab they had started heavily chlorinating the water and no bacteria were left! Since negative results don't make for good blog posts, please enjoy this video of my silkworms dancing to Flo Rida's Right Round instead.

bioephemera | March 19, 2009
This is pretty darn good for Stanford students! ;) Ready for the final?

grrlscientist | September 10, 2008
tags: CERN's Large Hadron Supercollider, physics, music, streaming video It is predicted that the world will end at 3am ET when CERN's Large Hadron Supercollider was turned on, creating a giant black hole that will suck the earth into it, destroying everything. Since we still exist, I guess it's time to sing a little, right? [4:49] Credits: There has been a lot of interest in the original mp3, lyrics, and vocals for remixing. You can find all that here. Images came from: particlephysics.ac.uk, space.com, the Institute of Physics, NASA, Symmetry, and Marvel The talented dancers doubled as…