Geneticist Dr. Maya Schuldiner has a lab full of the latest, shiniest robotic equipment. So why is she showing us pictures of socks? What she and her lab group mean to illustrate is that they have trained their research robots to find pairs – not of socks, alas, but of proteins. 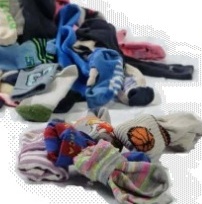 The team and their robots entered an area of research in which protein matches had previously been painstakingly identified one at time – and discovered hundreds of new pairs in one fell swoop. Scientists are interested in these pairs because they are necessary for transporting signaling molecules – a group that includes hormones and growth factors involved in cancer and development. The capacity to completely automate the search for pairs, says Schuldiner, should enable her and her team to eventually produce a “traffickome” – a sort of map of all the protein couples involved in protein trafficking through the cell.

Impressive as all that robotic equipment is, it is the people who make the work cutting-edge. Schuldiner and her group are continually asking new questions that tend to stretch the robots’ capabilities, and then inventing new methods to answer these questions. But, as with the most recent advances in DNA sequencing, it is the quantity – the sheer volume of information that is revealed – that is the game changer: With hundreds of protein pairs identified, as opposed to tens, patterns start to emerge. In fact according to Schuldiner, it has changed the very fundaments of her research: Experiments are no longer driven by hypotheses. Instead of formulating a theory as to which types of proteins might pair up and then building an experiment on these specific proteins, she can begin by creating and testing thousands of different protein combinations and let the automatic scanner turn up matches. Afterward, when the results are in, the researchers can form hypotheses based on the evidence and test these further. 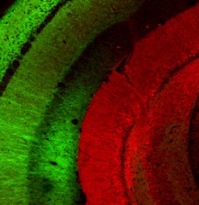 Speaking of the latest cutting-edge equipment, a second online article today describes the work of Dr. Ofer Yizhar, who is putting together his new lab at the Weizmann Institute more or less from the ground up. Yizhar recently joined the Neurobiology Department after conducting postdoctoral research in the optogenetics lab at Stanford. That field is so new that its tools are still being invented (by Yizhar, among others), and his lab is not exactly off-the-shelf.

As the name implies, optogenetics is a combination of optics and genetics. Neurons in mouse brains are genetically modified to contain light-sensing proteins originally lifted from algae. When light is shone on these neurons – from tiny implanted optic fibers – channels open up in their membranes. In other words, the neurons are activated by light. Now, instead simply recording neural responses, scientists can directly manipulate brain cells. So instead of only observing when neurons fire – something we can do today with electrodes – Yizhar and his group will be able to see which of the thousands of possible synaptic connections to those neurons are activated and, ultimately, to observe whole, complex neural circuits in action. For example, in his postdoctoral research at Stanford, Yizhar found that an imbalance between the activities of two types of neuron in the prefrontal cortex threw a main circuit out of whack, producing autism-like behavior in mice.

This ability – to literally run experiments inside a living brain – is another true game changer, one that hopefully will lead to genuine progress in understanding how the brain works and how things can go wrong there.