Major excavations are taking place in Old Uppsala because of railway work. Old Uppsala was a political, religious and mercantile centre from about AD 600 to 1274. In fact it may be termed the central place of the Swedes – tribe and kingdom – during those centuries.

My friend, author Kristina Ekero Eriksson, is the fieldwork's outreach officer and keeps a blog. So far there hasn't been much to report beyond what you might expect on a contract excavation in the region, but now some interesting stuff is popping up. How about some long lines of regularly spaced stone-filled pits? They're in the big field south of the Royal Barrows, and they look like they once held standing stones like the ones along the ancient road at the Anundshög barrow in the neighbouring province. Huge Late Iron Age barrows and roads lined with standing stones... Now all we need are the foundations of some good stone ships at Old Uppsala to complete the picture of a Viking Period royal centre! 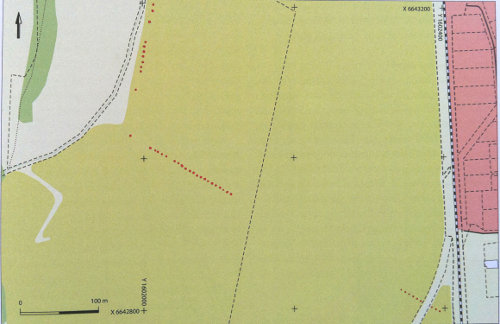 And where are the standing stones now? They were long gone by the 17th century. Well, soon after Christianisation a cathedral was built in Old Uppsala, most of which was then torn down and, unless I'm mistaken, sent downstream on rafts to build the current Uppsala cathedral.

[More about archaeology, metaldetecting; arkeologi, metallsÃ¶kare, Uppsala.] The view from my second investigation area. The great barrows were erected about AD 600. I spent Tuesday and Wednesday metal-detecting for my buddy John Ljungkvist on some of the most storied soil in Sweden: Old Uppsala.…

[More blog entries about archaeology, history, uppsala, Sweden; arkeologi, historia, idÃ©historia, Uppsala.] Magnus Alkarp defended his PhD thesis in Uppsala on 21 November. I just read the book, and my opinion is that Alkarp definitely deserves his PhD. In fact, I believe that he probably deserves…

Current Archaeology #271 has a long interview with Mick Aston of Time Team fame. When asked how he got into archaeology, Aston paints a little vignette of the renowned High Medieval archaeologist, professor Philip Rahtz:[At Birmingham in the mid-60s] Philip Rahtz had just been appointed, and was…

Livescience.com asked me a bunch of question about the Ales stenar stone ship on the occasion of MÃ¶rner & Lind's new bizarro paper. They didn't use much of what I wrote, so I'll put it up here. LS: What is the most remarkable thing -- physical, historical or otherwise - about Ales Stenar? MR:…

Archaeology at Old Uppsala continues to reveal interesting features, possibly to the chagrin of those who have long wanted to diminish the importance of the site. A correction: the Archbishopric moved to Östra Aros (present day Uppsala) in 1273, probably on May 18th. And I don't think the new cathedral project had any use for the stones from the old one, as it was a brick and limestone building and the granite blocks from the old cathedral were too small to be of use in the foundations. The were probably used locally for farm buildings and such.