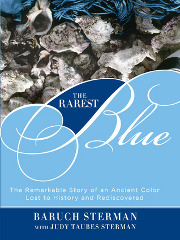 In this well-written, painstakingly annotated and beautifully designed book, physicist Baruch Sterman (with contributor Judy Taubes Sterman) traces the history and prehistory of a certain blue pigment, along with its cultural and religious significance through the ages. It's what the Torah and Talmud calls tekhelet, and it's made from a gland harvested from Murex sea snails.

Though greatly interested in history, archaeology and biology, I find myself poorly equipped to engage with the book's subject matter. Or put differently, I don't think I'm part of its intended audience. Because there's a major unstated premise here, explaining why a writer would want to view the history of the Eastern Mediterranean from such an odd thematic standpoint. Sterman assumes that his readers will find deeply meaningful certain mollusc-dyed blue treads prescribed in the Torah for the fringe of a Jew's ritual shawl. Those tassels are where his entire project starts. He clearly feels that the 19th century rediscovery of the ancient sacred dye that had been forgotten for centuries was a symbolically important event that renewed Judaism's ties with its origins. Indeed, working with dye is “... an integral part of my life's goal: the modern renewal of ancient techniques and a return to practices forgotten for so many centuries and nearly lost to history” (p. 219). Whereas I – an atheist Gentile, a cultural relativist and a citizen of the world's probably least nationalistic nation – believe that no culture is particularly meaningful or carries any intrinsic value.

All people have culture and funny traditional garments. That's nothing to wave about. There is no way for us humans to avoid having culture and funny garments. If we manage to uphold some kind of long-term continuity in this area, then so what? A modern Jew still is not the same as an Iron Age Jew. A born-and-bred Swede, I am not even the same as the people who called themselves Swedes 500 years ago. The people who now wear blue-fringed ritual shawls are essentially reenactors to me. Renaissance Fair.

Don't get me wrong: though he's hugely enthusiastic about past leaders of Hasidism, I don't think Sterman is an ethno-religious chauvinist. He just assumes that his reader will agree that customs such as the wearing of ritual shawls made according to ancient rules are very fine things. He describes his own attitude to those blue fringes in terms of “exuberant fervour” and “overwhelming sense of humility” (p. 210). Sterman is completely OK with the Baal-worshipping Canaanites of yore that get such a rough treatment by the Torah's writers. But he doesn't so much as mention today's Palestinians. And after explaining that the Dome of the Rock sits on the site of the Jewish temple's Holy of Holies, he admiringly describes the Temple Institute, an organisation that prepares for the reinstatement of scriptural Jewish temple service on that very spot! I can only call this passive-aggressive. And in that context it is distinctly odd to find Sterman speaking appreciatively about Irish independence from the English.

Sterman's use of the Torah as historical source is completely uncritical. To point out just one of the more obvious issues, he doesn't acknowledge that Kings David and Solomon are now widely considered to be fictional. They're to Israel what the Yellow Emperor is to China. Last I checked, the 9th century BC King Omri of Israel was the earliest Biblical figure whose bare existence has unequivocal support in period sources. If I understand correctly, historians in Tel Aviv have accepted this for decades while the ones in Jerusalem hold on to the traditional accounts. Sterman is a very well-read man, as the book's meaty bibliography attests. I can only assume that he knows that not even all Israeli Jews believe in King David any more, but has chosen to uphold a polite fiction that his intended reader will be happy to share.

I would prefer it if people living in Israel rolled up both their fringed shawls and their prayer rugs once and for all and sent them off to be recycled. They are a stark example of how unhealthy it is hold on to tribal superstitions and ancient identities. Jews should be more concerned with tying knots of fellowship with the Palestinians and neighbouring countries than with the fictional kings of a bygone golden age.

How a Snail Can Bridge Science and Religion

Hexaplex trunculus Linnaeus, 1758 Please allow me to clear something up right away: I loathe to mention science and religion in the same breath. But this story is sufficiently compelling to evoke such blaspheme. How can a humble snail bridge the gap? An analytical chemist Zvi C. Koren…

Unholy Business: A True Tale of Faith, Greed and Forgery in the Holy Land

Why Palin Used the Phrase "Blood Libel": The Theopolitical Right Believes They Are the New and Improved Jews

If you haven't heard by now, Sarah Palin compared criticism of her to "blood libel", the disgusting medieval falsehood that Jews used Christian blood in religious rituals. While some have chalked this up to paranoia, I don't think that's correct (besides, Palin's paranoia stems from the bursting…

Some stupid is so powerful that it can only be viewed safely through the StupidViewer 9000 (from here) Here's a joke: a Republican staffer of a conservative Christian Republican goes into a synagogue and tells the congregation that his candidate is more Jewish than they are. It's not very funny,…

Since we view this from a position of privilege (our culture is also close to the world's "default" culture) it is difficult to be objective.
But -as you note- taking ethnic identity too far is not constructive. Even here in peaceful Sweden we have ethnic identity guys (always guys, not women) who parade their presumably unique Swedishness by voting for extreme politicians or spraying grafitti all over (they have not hijacked skinhead culture in the manner of America, fortunately).

Western democracies own political hegemony, but we certainly aren't default in the statistical sense. Ask an Indian or Chinese farmer.

They’re to Israel what the Yellow Emperor is to China.

That's a brilliant way to put it!

hijacked skinhead culture in the manner of America

It's not just America! In Austria, the number of left-wing skinheads is something like 3. You see a skinhead, you can safely assume he yearns to beat you up if you look too foreign.

...Uh. Can you do anything about the time machine here? The comments are in stratigraphic order, but still numbered in the reverse!

I know, it's really annoying! I've emailed our tech guy again about it.

(OT) Speaking of time machines and heritage? I'll give you "Aves" heritage! (Swedish-language dino-feather stuff after annoying ad) http://www.dn.se/nyheter/vetenskap/t-rex-har-fjadrar-i-dinoutstallning Now that is a heritage.

To paraphrase: I disagree with your opinion, but I uphold your right to express it. I will not, however, retweet it.

I don't recall a single mention of retweeting in that Voltaire biography.