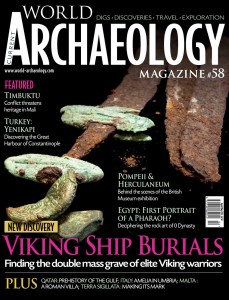 Current World Archaeology #58 (April/May) has a seven-page feature on the 8th century mass graves in ships at Salme on Saaremaa in Estonia. This astonishing find interests me greatly as the ships and the dead men's equipment are Scandinavian, and so I mentioned it here back in 2008. One of the sword pommels is an example of the animal-figurine weaponry Jan Peder Lamm and myself have published on and suggest Finnish involvement. And boat burial in and of itself is a theme with which I have worked a lot. Here we seem to be dealing with Scandies who got badly beaten when attempting a raid, and who spent a considerable amount of time and effort burying their fallen comrades in their ships on the beach.

Skalk 2013:2 (April) has another seven-page feature, this one on the Hårby valkyrie miniature that I blogged about in January. It has excellent pictures including a detailed drawing of the interlace decoration on the lady's right-hand side, showing it to be ring knots typical of the Borre style which flourished c. 850-950. The authors suggest a date already around 800, but do not argue much for it except that they understand that the figurine is Viking Period and believe (erroneously) that the valkyrie's hair knot is mainly a Vendel Period feature. I was thrilled to read the “Song of Spears” out of Njal's Saga for the first time, detailing the symbolic links between valkyries, faith, weaponry and weaving.

Current Archaeology #278 (May) has a feature on mass graves at Kilkenny Workhouse from the Irish Potato Famine about 1850. Starving people congregated here for free meals, infectious diseases spread through the weakened population and horrifying numbers died. But the piece is an interesting read: one detail particularly caught my eye:

An early attempt to alleviate the suffering by Prime Minister Robert Peel involved the bulk import of maize, or “Indian meal”, from America in 1846 and 1847. … Stable isotope analysis by Julia Beaumont from the University of Bradford has revealed that three individuals, aged six, seven and 13, preserve traces of a sudden shift from a potato to a maize diet in their bone collagen.

The same technique has recently been used to show that the cannibalised 14-year-old whose de-fleshed bones were found in a 1609/10 Jamestown waste midden was a well-nourished recent arrival from Europe.

As a scientist you can pay as much attention to their sword pommels as you can find funding for, but a pop culture reader asks who the hell beat the shit out of shiploads of "elite Viking warriors"?

Lassi,
There were probably a lot of polities (tribe-level or proto-kingdoms) of which no tales remain in the Baltic era (the Teutonic knights would have suppressed tales of pre-cristian rulers).
And vikings were not necessarily elites. They were pirates. It was not until Harald Bluetooth that we have a preserved record of a professional army. So an experienced Estonian chieftain leading a force against poorly led raiders would have given them a bloody nose.

Yeah, I really don't know where the whole "elite" thing comes from here.

Current World Archaeology #58; From Byzantium: "the astonishingly fresh-looking footprints of men, women, and children who walked across the soft mud along the shoreline during the Neolithic period."
Cue for Turkish fundamentalists to claim the footprints were actually made immediately after The Flood...
No seriously, that country has seen some serious backlash against a modern secular "weltanschaung" recently.

I learned at the World Skeptics Con in Berlin last spring that Turkey is the Islamic country with the most widespread support for creationism. Indonesia has the lowest support of them all.

At least they were technologically elite. This is the oldest known Baltic boat with sails.

That sail could be seen from afar. The inhabitants of the coast had time to organise defense. From leading edge to bleeding edge, as usual with new technology...

The edge in technolgy was probably the fast, clinker-built long ships.
--- --- --- --- --- --- --- --- ---
Off-topic; When the sword-and-sorcery of Fritz Leiber was mentioned, I recalled that Fafhrd and the Mouser were bossed around by two wizards, one of which had seven eyes visible in the darkness under his hood. Now it looks like I have found his secret identity!
Zechariah 4:10: “Who dares despise the day of small things, since the seven eyes of the Lord that range throughout the earth will rejoice when they see the chosen capstone in the hand of Zerubbabel?”

I wonder what statue of the Lord of Hosts, later of course declared retroactively heretic and burned, that mention of seven eyes refers to.