By aardvarchaeology on September 2, 2014. 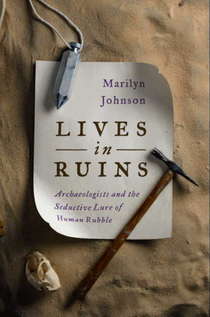 Still, she's an outside observer of our tribe, and she approaches us from a very particular direction. Take her introductory statement that “Field school … usually takes place in a desert or jungle … charging tuition, quite a lot of it, usually thousands of dollars” (p. 15). This certainly isn't true in Europe, and to my knowledge not in the US either. Most professional archaeologists worldwide have never paid to attend extramural field school and have never worked in jungles or deserts. In fact, field school is usually simply a module on undergraduate courses and is organised locally by lecturers at an archaeology department.

This misrepresentation is characteristic of Johnson's overall approach to archaeology. It wouldn't be fair to say that she romanticises the discipline. She's very open about the dirty and strenuous nature of fieldwork, and about the abysmal career prospects. But she definitely makes archaeology out to be far more exciting and adventurous than most of it really is. The rubble we study generally offers very little in the way of the subtitle's “seductive lure”. But Johnson will have the reader believe that archaeology is “the exotic, gutsy, authentic alternative to the tamed and packaged life” (p. 130).

I should pause here to note that my own strange career in archaeology does kind of fit the Marilyn Johnson model. Living with very little financial security, I do lead expeditions to exciting sites that will never be touched by land development. The words of maritime archaeologist Kathy Abbass quoted on p. 117-118 mirror my own life choices: “So who is in worse shape – the one who mostly followed passion and knows how to live on a shoestring, or the one who continued in a drudge job for elusive economic security and is probably deep in debt, too?” But my point is that you would learn very little about what the Swedish archaeological profession is like by studying my modus operandi. I am an oddity. And so are most of Johnson's interviewees.

She keeps coming back to those jungles and deserts. Johnson tells us she looked for “a place with an exotic background to learn the basics of fieldwork” (p. 20) as if this demands no explanation. Most of her selected interviewees excavate in far-off corners of the world, but Johnson never tells the reader that this is a minority behaviour within the profession. In fact, the typical archaeologist is found working on a humdrum site threatened by a highway project within 25 km of a major Western city. To the extent that she ever sees jungles or deserts, it's on her vacation, and she goes there to take time off from archaeology.

Johnson covers such full-time contract archaeologists only briefly and they show up two thirds through the book. Contract archaeology is where all the jobs are, but this book describes it as the last resort of the desperate! “When she was twenty years old, a recent graduate of Bryn Mawr … Moran had been so determined to work as an archaeologist that she took a job on a field crew for a [Cultural Resource Management] firm” (p. 183).

I received a pre-print copy of the book for review, apparently because Aard is either a “Men's Interest Site” (!) or a “Book Blog” according to the illuminating and surprising back-cover box about the marketing campaign. My copy has the unfortunate front cover shown above that I hope the publisher will change in the final print edition. But it's actually kind of apt for the book.

It's a photo montage of three objects, all to different scales, and none of which is used or found by archaeologists. There's an odd slender hammer that looks like it might belong to a shoemaker. This probably refers obliquely to a geologist's hammer, which is of no concern to archaeologists. There's a cleanly defleshed undamaged rodent cranium with its lower jaw in place: clearly a specimen from a modern zoological collection which has never been underground. Finally there's a plumb bob, rarely used these days thanks to digital measuring gear.

This cover imagery, no doubt put together by a non-archaeologist in HarperCollins's publicity department, inadvertently shows quite well what the book is about: enthusiastically reproducing popular misconceptions about what archaeology is like. Like the Indiana Jones movies that Johnson salutes, Lives in Ruins is fun, engaging and not particularly realistic.

Sounds pretty typical of what outsiders think archaeology is about. Odd that she should have written a book about the profession and still not overcome the stereotypical view, though.

The angle she pushes is that by any outside standard, her interviewees lead pretty precarious lives, but they are happy anyway. So it's an intentional joke.

The hammer pictured is a Warrington pattern, typically used by cabinetmakers. The flattened blade is used to start brads with little chance of mashing the fingers. You hold the brad lightly and allow the blade to fall between the fingers. Once started the more common cylindrical head is used to bring it flush.

Yes, still something of an inside joke.

The very first encounter with archaeologists I had was during my childhood -a researcher and his students were looking for stone shards excavated by plough in one of our fields (adjacent to a some rapids where you would need to carry your canoes -an ovious place to look for settlements). It does not get more mundane than that.

Archaeologist 'digs' using drone for fieldwork in Armenia http://phys.org/news
Mountains...but where are the djungles? And the tribesmen have left no traps.

Eh ... I think that fun stories about any profession will focus on the exciting and exotic. My life as a startup programmer didn't look anything like a typical glossy-magazine article on them, and I'm pretty sure that most American bankers don't live like the characters in "The Wolf of Wall Street." If someone wants to read about career prospects in a field, a professional association or government statistics body will usually provide something sober and factual.

If you're attending a field school for credit in the US, then yes, you're paying tuition, generally in the thousands of dollars. I've also paid varying fees to attend field schools in Europe as well, and those were my department's excavations. In my experience, if the excavation leader has funding from elsewhere then they make the dig cheap or free for a student to attend, and if not, then they turn it into a field school and charge for attendance.

No, she is not writing specifically about academic or US archaeologists. As for stigma, the majority group of employed members of a profession needn't really bother about what the minority thinks.

Oh aye. Hammer wars. Warrington pattern is chunkier, up to 1lb , capable of dealing with up to 2" oval wire nails and cut sprigs.
That there's what we call a "telephone hammer", another type of crosspein pin hammer. I use mine for veneer pins. Presumably once in demand by the late unlamented GPO (other state monopolies are available elsewhere). And no it doesn't stop me mashing my fingers even though it's supposed to. I use needlenose pliers as well, those pins are tiny. Wouldn't want to chip the nail varnish, would I?

The only hammers we ever used on site looked like this, even if it was just for survey pegs, or holding a pile of context sheets or minigip bags down.