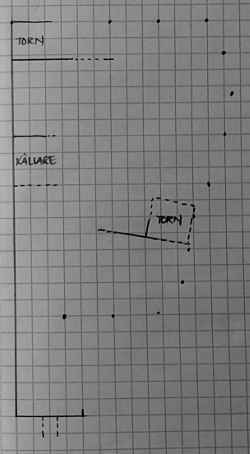 Landsjö castle. State of knowledge after the 2014 excavations.

I'm giving a talk on Landsjö castle to the Kimstad Historical Society next week, and while preparing my presentation I made a sketch plan of this summer's discoveries regarding the plan. The ruin just barely breaks the turf, so we didn't know much about the castle's layout beforehand except that it had a 60-metre straight stretch of perimeter wall along the west side and that it cannot have been rectangular.

Our main architectural discoveries in two July weeks of digging and clearing brush were as follows.

3. The perimeter wall had no substantial east reach above the castle islet's steep east scarp.

4. The previously known NW tower was part of a longer building along the north reach of the perimeter wall.

5. The perimeter wall's south reach was never any longer than can be made out today.

6. The castle's main entrance into the outer bailey was over a bridge across the dry moat outside the south reach. 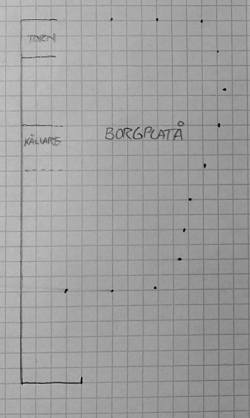 How do you create a sketch map for an uneven, brush-covered site like that? Geology students on campus seem to use a setup with mirrors and lasers on poles, but I wonder if that would be overkill.

I think the answer is probably "not very accurately".