By aardvarchaeology on November 2, 2015. 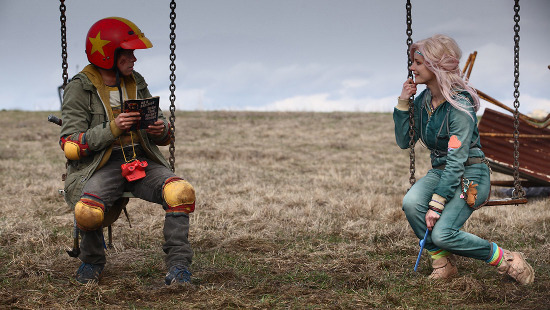 Encouraged by my first film festival last year, I've signed up for two this year. This past week it's been the genre festival Monsters of Film, which leans towards horror but has a lot of other stuff too (but very few monster flicks, actually). I saw 5½ films in five days. Two get my special recommendation:

Three others were also well worth watching:

I walked out of the shorts anthology México Bárbaro halfway through when the raping and child necrophilia started. Bleagh. There are a lot of things in horror that will gross you out and depress you without scaring or intriguing you. Some of the other shorts in the anthology were OK though.

There is an indie comedy/horror film adaptation out there of "Johm Dies At the End"
Here is a customer review by Rod Simpson:
"Not sure what it is, but I like it" (snip) "Coscarelli's singular voice in horror is the only one who could bring this to life, whether it's the man made out of meat, the door that is 'impossible to open', or some of the more far out stuff of the third act. The film is full of little ideas and touches that reward as both an insane spectacle and as an element that will bring different views to light on multiple rewatches."

Gabriel, directed by Shane Abbess was a surprising Australian film. Gabriel, the last archangel goes down into Limbo to fight Sammael. I had been expecting the usual CGI paranormal shoot-them-up but this was actually good. Imagine a bit of Neil Gaiman and you get the gist.

In the 1920s, Australia had the biggest film industry in the world, bigger than Hollywood (to understand why, think early movie cameras and the intensity of natural light in Australia, which gets more solar radiation than any other continent), and Australian cinema is going through another golden era now.

I am guessing here, but a problem for film in Australia, Canada and other Anglo-Saxon countries might be that Hollywood (and whatever remains of the British film industry) becomes the norm, and diversity gets crowded out. Like the Reggae scene on Jamaica when MTV arrived from USA.
Not much business left for the local talent.

There is something of a Canadian film industry, although they tend to distribute the product via Hollywood.

One of the more infamous examples was the Jackie Chan vehicle Rumble in the Bronx. The film was actually shot in Vancouver, which is why some scenes show a mountainous skyline, which the real New York doesn't have.

#5 - Yes, that plus lack of funding. Most Australian films are very low budget by the norms of Hollywood, because they are not going to get the box office sales that Hollywood films get. And the lack of budget shows up painfully clearly on the screen.

One notable example was an Australian film made about the Kokoda Trail, where during WWII a group of poorly trained and poorly equipped Australian militia executed a brilliant strategic withdrawal against the oncoming Japanese who were descending southwards across Papua New Guinea towards Port Moresby, and were then reinforced by Australian Army regulars returned from the Middle East, who forced the Japanese back. It was the first reversal the Japanese land army suffered during the war - up until then they had appeared to be invincible. At the time, the militia were abused by MacArthur, who accused them of "running like rabbits", when in fact their actions were truly heroic in an area which was a very difficult and hostile environment to try to fight in. The Australian public at the time were suckered by MacArthur's propaganda and referred sneeringly to the militia as "chocolate soldiers" - the true significance of them delaying the Japanese advance until the battle hardened regulars could get there has only fairly recently been recognised.

It was also, incidentally, a very 'dirty' campaign - the Japanese supply lines were stretched and they engaged in cannibalism, and the Australian troops pulled some very dirty tricks that few people talk about, like leaving disease-tainted food supplies behind as they retreated for the Japanese to find.

Anyway, a very good Australian film was made about this, essentially showing the truth of what happened, but where this film fell down badly was in the battle scenes, which were so bad they were humorous, because the producers just didn't have a big enough budget to stage the battle scenes convincingly.

I am reminded of the "battle of the bulge" in 1944.
Everybody writes about the siege of Bastogne but the true heroism was done by a small group of soldiers at the border who held back the Germans a whole day before they were overrun. This delay might have been what enraged the Waffen-SS colonel Pieper so much he ordered a massacre of American POWs at Malmedy.
--- --- ---
Also, at New Guinea the water table coincided with the surface, making it hell to dig foxholes and taking cover in them. The Japanese army often ignored things like logistics since the soldiers were supposed to "conquer or die". If successful, they could live off the land. If not, like in the failed assault on Assam, starvation would set in. The Japanese officers despised their soldiers and did not bother with providing adequate medical supplies even for their own, much less for any POWs.

That was the least of it, Birger - they had to contend with malaria and dysentry; all of them got sick. They had to cross the highlands, and it's freezing up there, even though at such low latitude. The Japanese couldn't afford to take any prisoners, so they executed Australian prisoners by beating them up and then disembowelling them with swords.

When I was a very small boy, I met a man who had been one of the "chocolate soldiers" - he was as thin as a stick, his eyes and skin were yellow, and he was shaking constantly from malaria. This was in the early 50s. Those guys lucky enough to have survived never recovered their health.