These little wonders of 10th century goldsmith work are named for the first find, made in 1879 when Hjalmar Stolpe excavated in the cemeteries of Birka near Stockholm. In addition to the crucifix grave 660 contained, among other things, two other fine silver filigree pendants and a bronze-capped iron wand that may have served pagan religious purposes. 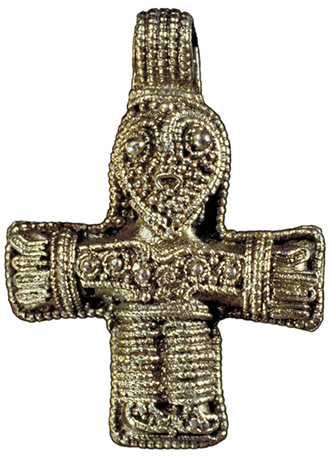 In 2012 Silke Eisenschmidt identified fragments of a second Birka crucifix among the finds from a wagon burial at Ketting, excavated by Jens Raben in 1927. This is on the island of Als on the south-east coast of Jutland, just across the sound from Funen, and the new find is from Nyborg municipality on the east coast of that island. (I was there for a castle conference last August.) The two Danish sites are less than a day's sailing and rowing from the town of Hedeby, which suggests to me that this is where all three crucifixes were made. They're too similar for more than one or two people to have been making them. Birka and Hedeby seems to have shared an itinerant population of craftspeople and traders. 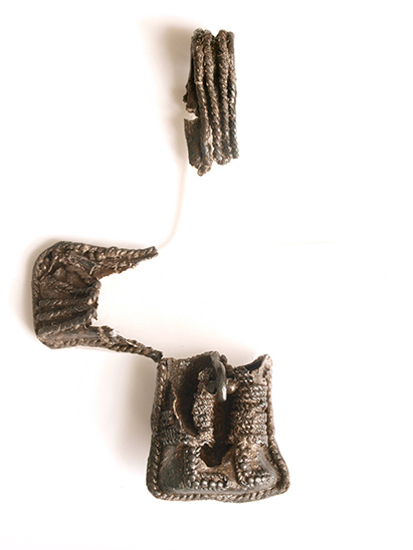 Fragmentary crucifix from a wagon burial at Ketting on Als, Denmark.

Many thanks to Dennis for letting me publish his photographs! Note that by not cleaning the find thoroughly, Dennis is doing the right thing: this is a job for the finds conservator. 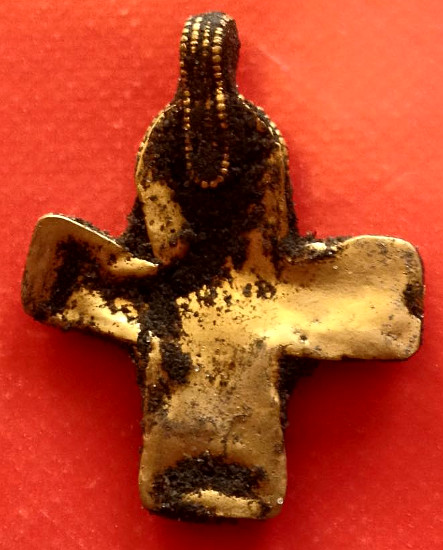 The reverse of the newly found crucifix.

Update 13 March: My friend and collaborator Tobias Bondesson alerted me to a piece of filigreed hack silver from the Omø hoard that looks a lot like the right hand of a fourth Birka crucifix. It's different from its siblings in being decorated on the reverse and having no thumb, but to my eye there's little else this fragment could be from. The hoard was buried during the reign of Sweyn Forkbeard, 986–1014. It was found by detectorist Robert Hemming Poulsen in September of 2015. Omø is a small island between Funen and Zealand, not far across the water from Nyborg, which neatly reinforces the distribution we have begun to discern for the type. 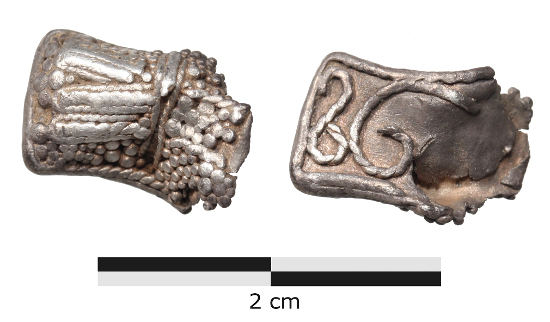 The late 10th century hoard found on Omö last year has what is most likely an arm from such a crucifix. With all the Hiddensee style ornaments, that hoard has strong connections to Hedeby as well.

You've written before about the mostly positive relationship between detectorists and the archaeological community there. How significant for you (in general) is the loss of context problem when you utilize artifacts from detectorists?

No loss of context. Detectorists usually stay on ploughed soil and use GPS to geotag each find. They produce documentation to the same standard that I would use -- but they find way way more stuff per hour because they're better at using their instruments.

@Martin #4: Wow, that is really awesome. As a complete outsider (physicist), I had a mental image of elderly beachcombers in frayed shorts and floppy hats wandering around with metal detectors looking for pocket change or dropped watches.

What you describe sounds more like the amateur astronomical community: comet hunters and variable star observers doing work comparable to the professionals (but without all the grant-chasing and departmental admin burdens :-) ).

It varies from country to country. In poor countries and ones with weak heritage legislation most detectorists are just looters. In Denmark and the UK huge numbers of them are much-valued participants in archaeology. In Sweden our poorly thought-out heritage law keeps them strictly looking for last year's lost jewellery and spare change on beaches.

Hi, better photos here, where the crucifix has been slightly cleaned:
http://www.medievalhistories.com/christ-from-aunslev-denmarks-oldest-cr…

This is clearly Loki, not a Christian artifact!

Th image without a thumb may have been a vitally realistic detail of crucifixion. Driving a nail through the median nerve in the arm causes the thumb to flip over and appear to have disappeared. The Shroud of Turin is a major example of this occurrence.--Tom Reilly.

My thoughts are that they are not Jesus on the cross ,but were protectors made for maybe three sisters or brothers like good luck charm's

a) People in the 10th century didn't practice crucifixion and wouldn't know that.

b) The Shroud of Turin was made about 400 years after these pendants.

a) The fact that we know about 3-4 crucifixes of this type suggests that there must be hundreds lying around waiting to be discovered, and additional hundreds that were recycled for the silver already in the 11th and 12th centuries.

b) Why do you believe that protective amulets couldn't depict Jesus on the cross? The pendants clearly depict someone on a cross.

This is fascinating. It seems to me to be clear representation of being tied to the cross with rope, rather than nails. There is considerable gold working skill in evidence, they could have just as easily represented nails in their work. Could 'nailing to the cross' be a modern interpretation in error ? (I'm just a layman, obviously).

While everyone is calling this a 'crucifix', I find it odd the figure appears to be wearing a helmet with a clearly visible nose guard. Which makes me wonder what else it could be, besides a Christian crucifix.

These towns are strong missionary milieux. The inhabitants knew about Christian symbols.

Could be it represented either Christian or pagan symbology, depending on who was wearing it! It brings to mind a photo I saw of a mold that, by adding or removing a plug, could cast either a Mjolnir amulet or a Christian cross. The transition to Christianity was far from instantaneous among the Vikings.

Rich, everyone in the research community agrees with you that conversion was not instantaneous.

Are you sure it is a cross? It seem's to be more of a god fetish or something to do wih strength in battle.

Why does Everyone keep calling this a Crucifix? When a child first starts drawing people they draw them in this position...standing upright, arms outstretched. I see nothing to indicate that it is a crucifix. It's a cute artistic piece of artwork.

I would LOVE to believe that it is a Christian artifact as it it may appear to be for someone of our era. However, I looked up Loki as a result of a comment (I had never heard of that legend) and just in a few minutes research, I am wondering if enough research was done to be able to prove that it is not Loki. I saw pictures of ancient depictions of Loki online where he was laying down bound with hopes around his wrists and ankles. So, I am not convinced at this point that this in fact a Christian relic. Need more from the scientists/archeologist.

I am a Viking archaeologist. The Viking Period is the time when everyone in Scandinavia becomes intimately aware of Christianity. Regardless of whether they convert or not. The interpretation of these pendants is uncontroversial.

Martin R. you have a picture of the fractured crucifix from Als DK. Look at the groin region - what do you see?

(remember who saw it first)

Haha, excellent! Somebody call Mary Magdalene and tell her the important bits are still stuck on!

- or call Martin R for a learned interpretation?