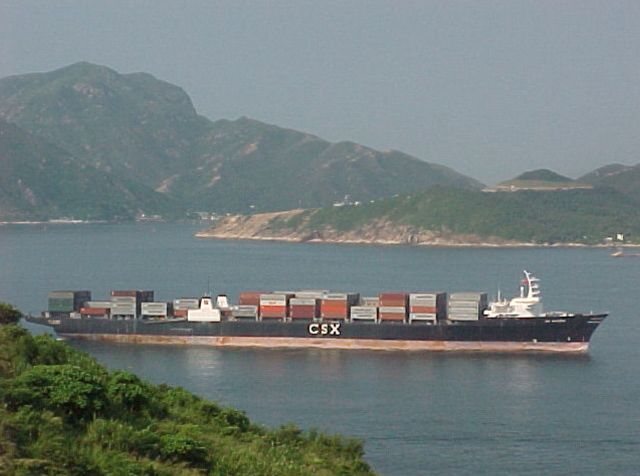 The Horizon Spirit, a 272-meter cargo ship, makes the round trip between Los Angeles and Hawaii every two weeks.

This is not a story about the latest mega cruise ship, with five swimming pools, 10 restaurants, a rock-climbing wall, and a casino. The vessel we're talking about, the Horizon Spirit, will be outfitted instead with radars, aerosol sampling devices, and other high-tech tools. But even without the fancy umbrella drinks, Ernie Lewis, an atmospheric scientist at the U.S. Department of Energy's (DOE) Brookhaven National Laboratory, can't wait to set sail.

Last month, he and several colleagues traveled to California to visit the Spirit, a cargo carrier owned by Horizon Lines that makes regular runs to and from Hawaii. In January, they'll embark on a round-trip voyage to investigate how to get the ship ready for a yearlong mission gathering data to improve climate models, a project funded by DOE's Atmospheric Radiation Measurement (ARM) Climate Research Facility.

The idea is to take a long-term look at the clouds over the ocean. These clouds have a large influence on Earth's climate, but climate models have a tough time accurately representing them and the transitions among their different types -- stratocumulus, cumulus, and so on. So Lewis proposed deploying the ARM Facility's sophisticated scientific instruments aboard a cargo vessel that already plies a route across an area of the Pacific where these cloud-type transitions are an ever-present phenomenon to gather data to improve the models.

The project -- dubbed MAGIC, for the Marine ARM GPCI Investigation of Clouds, where GPCI is a project comparing data from the major climate models -- was just approved and will begin next October and run through September 2013.

The Future of Subatomic Glue-Gazing

June 14, 2012
RHIC, the Relativistic Heavy Ion Collider at Brookhaven Lab, found it first: a “perfect” liquid of strongly interacting quarks and gluons – a quark-gluon plasma (QGP) – produced by slamming heavy ions together at close to the speed of light. The fact that the QGP produced in these particle smashups…

March 15, 2012
There are many complex steps to the dance of DNA replication. And scientists must learn to sway along in order to understand how both healthy and cancerous cells divide. Scientists at Brookhaven National Laboratory have begun to learn how to follow the complex molecular choreography by which…

Brookhaven Lab and the Search for the Higgs

December 13, 2011
This guest post was written by Brookhaven Lab physicist Kostas Nikolopoulos. Today's public seminar at CERN, where the ATLAS and CMS collaborations presented the preliminary results of their searches for the Standard Model (SM) Higgs boson with the full dataset collected during 2011, is a landmark…