"It's not the job of the theorist to defend his model at all costs!" - Joel Primack

One of the more puzzling phenomena in our quantum Universe is that of entanglement: two particles remain in mutually indeterminate states until one is measured, and then the other — even if it's across the Universe — is immediately known. 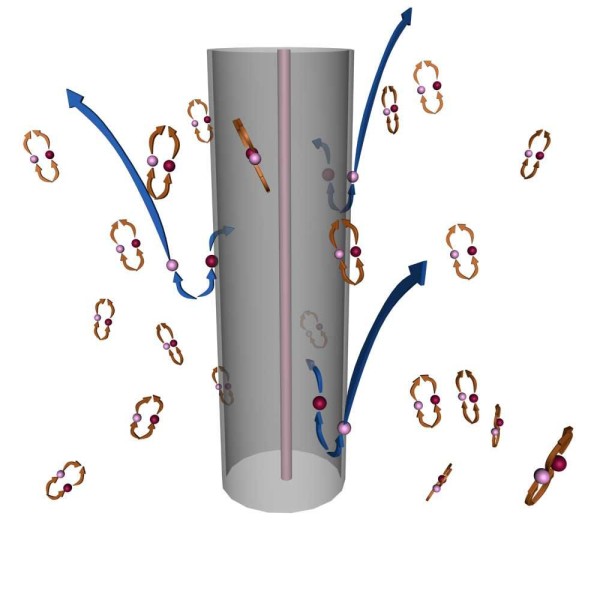 In theory, this should be true even if one member of the pair falls into a black hole, although it's impossible to measure that. However, we can (and have) measured that for the laboratory analogue of black holes, known as "dumb holes," and the entanglement survives!

Go read the full story of how quantum entanglement survives, even across an event horizon, thanks to Sabine Hossenfelder over at Forbes!

It seems to suggest that gravity itself might arise from the interaction of many constituents. Perhaps space-time isn’t as immaterial as we thought.
Sabine Hossenfelder
Sabine

Sabine rules! Long live aether, or LQG, or anything that treats space-time as something other than just a coordinate system for overlapping inertial frames of reference.

As for the rest of the article, it is a neat bit of testing but the result seems intuitive. In the same say that entangled pairs can't be used to transmit information through the universe faster than light, they don't transmit information across an event horizon. Whatever information is there is baked in when the pair is entangled. It doesn't shock to discover that even after one half of the entangled pair falls into a black hole that the other is still made from the same recipe.

You mean "long live everyone else being wrong! Because then I can claim that my ignorance is as good as the informed testimony of experts!".

In the 1. paragraph: "[...] It is the subject of legends and folk tales. It plays a prominent role in Wagner’s operas. It’s also a black hole."

How I loathe this kind of diction that has spread all over science.

"It is intriguing that this relation between gravity and fluid dynamics can be made mathematically precise. "

I remember reading several years back, that the mathematics/simulations of fluid dynamics has been used in certain areas of quantum field theory. I don't remember the specifics.. would have to dig a bit online. But remember that fluid dynamics wasn't replacing the math of QM.. instead it offered a novel way of visualizing certain aspects of QFT much better than with standard methods. In other words, it gives answers and presents ways of "asking questions" that wouldn't be available or would be much more difficult without using fluid dynamics.

So cheers to all the supercomputers running fluid dynamics simulations :)

My personal favorite use of fluid dynamics is in showing the possible limitations of using theories of approximation (like Relativity) on small scales. In particular I am referring to the singularities generated in the math of the well tested Navier-Stokes equations. It works on the macro scale but doesn't when you zoom in on the micro scale. When you take into account the actual fundamental mechanics of what the fluid is made of it all makes sense that there is no real singularity.

It seems to me that Sabine did a piece that was posted on Starts With A Bang. I do see she has one on her own blog.

Sorry, but what advace have these "models" comparing to numerival solutions of equations of gravity? It is nothing else that analog computer solving these equations and it cannot show us anything new compared with numerical solotiuons. There is only one miner advantage, they can directly visualise the solution, but I'm not sure this advance is worth to do such "experiments".

"but I’m not sure this advance is worth to do such “experiments”."

OK, so don't do these experiments.

Nobody is making you.

"OK, so don’t do these experiments.
Nobody is making you."

Not being "sure" does not mean being hopeful you Idiot Twit, ask lottery players.
Heck, I am "not sure" I will catch a souvenir foul ball at the baseball game tonight so should I not at least try when one comes my way?
Dummy..

"Not being “sure” does not mean being hopeful you Idiot "

If that in ANY way was news to me that "sure" != "hopeful", then I would indeed be an idiot.

However, it is not, and the fact that you presume that it is true indicates you are the idiot, teabagged.

It also doesn't actually mean anything in the context, since you don't have to be hopeful either to be forced to do the experiments, and neither does it mean anyone is making you.

Indeed your response there is completely void of anything other than your normal spite.

Making everyone wonder why you felt you "had" to say it...

The "laboratory analogues of black holes" are nothing like the real thing. Gravity is nothing like the waterfall analogy. Space is not falling down, we don't live in some chicken-little world. And Hawking radiation has *not* been observed. Which is no surprise since it relies on negative-energy particles and ignores gravitational time dilation. The article makes unwarranted claims and throws in everything but the kitchen sink, then ends by saying "perhaps space-time isn’t as immaterial as we thought". This demonstrates that the author absolutely does not understand general relativity. All in it's popscience, take it with a large pinch of salt.

On the one hand we have an article written by a working physicist, on the other hand a comment by a marginal engineer with a track record of never being correct that the scientist "doesn't understand relativity".
Whom to believe? If only there were a way to decide.
There's a reason duffield's comments haven't been missed.

There is a way to decide. Go and read the Einstein digital papers. Also see the Wikipedia article on Gullstrand–Painlevé coordinates. Einstein rejected the Painlevé solution. Do your own research. When you have, you will appreciate that the article is popscience woo that flatly contradicts Einstein. Like I said, we do not live in some Chicken-Little world where space falls down in a gravitational field.

Sorry jd, the way to decide is to believe the people who understand physics, and you aren't one of them.

"The “laboratory analogues of black holes” are nothing like the real thing."

Except by acting in some ways the same.

Which is what an analogue is.

"Except by acting in some ways the same."

Indeed, this experiment is a fascinating way to look at it. I wonder what is your opinion. Is it "just" an analogue or "more" then just an analogue?

Since the mechanisation is different, it's probably just an analogue.

However, mathematical oddities that don't appear to logically HAVE to be real, turn out to be surprisingly real (look up evanescent waves: imaginary waves really do seem to act as if they are real, when they were introduced merely to make the maths easier to write).

So it's not impossible that it's a lot more of an analogue than "Mr Potato Head" is an analogue of a human being for children to play with.

In short, I don't know enough to say whether it is, but by gut feeling is that it's analogous and limited within the sphere of accurate analogy, and isn't producing some sort of "mini black hole" or other *gravitational* anomaly.

Btw.: Did not expect that you ever suffer "gut feelings".

The ancient greeks thought the brain was just an organ for regulating blood temperature. The seat of learning was in the stomach.

From our Helenistic influences, we get the saying "Gut feeling".

Means nothing more nowadays than "not explicitly cogitated on". And can mean anything from "completely made up" to "the amalgamation of a billion different slivers of evidence that are all highly suggestive".

The tank experiment seems to show waves travelling up to the 'event horizon' and stopping. Is this right. If these waves are in any way analogous to light waves, then we would infer that light waves stop at the event horizon of a black hole. Comments on this would be sure to be interesting.

The topic is all on comments on that, Dave.

And the effect you describe is already widely described mathematically in terms of general relativity both on this site (in earlier topics) and on Wikipeda, among other places.

Find out what has already been commented first.