Wanted: A sense of humor for climateers

Andy Revkin recently asked us to consider this 1881 New York Times article and judge whether it's an example of early global warming alarmism or satire. It was unearthed by pseudoskeptic Steve Goddard, prompting Andy to write:

For some reason Goddard avoids pasting into his blog post the humorous, almost Twain-like, elements later in the article that clearly show the author was not exactly taking the astronomer's assertions very seriously.

By the time I got to Goddard's blog, he added this to his post:

[addendum] This 1881 article is satirizing one of the more alarmist explanations for the widespread belief of "thoughtful persons" at that time : "The growing heat of our Summers, the drying up of streams, and the increased frequency of hurricanes, yellow fever, and earthquakes have latterly attracted the attention of thoughtful persons."

Sound familiar? The exact same beliefs being espoused by the alarmist community now.

So I have no idea how Goddard originally interpreted the thing. I don't much care. There is precisely zero doubt that is satire. The interesting question is just what the anonymous writer is satirizing. Consider this passage:

The quarrel between Chili and Peru will cease with the increase of Antarctic temperature to which those unhappy countries will be subjected, and Minister HURLBUT and Minister KILPATRICK, instead of writing letters aimed at one another, will huddle themselves under the same blanket and devote all their energies to the task of keeping warm.

Is the writer mocking apocalyptic alarmism by implying that "thoughtful people" worried about increased hurricane frequency are fools? Or is he just having some fun at the expense of those who don't know enough to recognize the absurdity of a story based on the notion that the geographical North Pole is moving rapidly into Siberia? What exactly is the point of the piece?

What answer you gives depends a lot on what you already think about climate change, the state of public understand of science, end-times theology and half a dozen other subjects. One might call this sort of writing the journalistic equivalent of impressionism, which was, after all, an artistic movement near its peak in 1881.

I for one find it hilarious, and wish there were more writers capable of injecting a bit of humor into what can be a very dark subject -- not to make light of our fears, but to help us remember that we are all humans, alarmist and denier alike, foibles and all. Even climate change activists need to laugh every now and then. 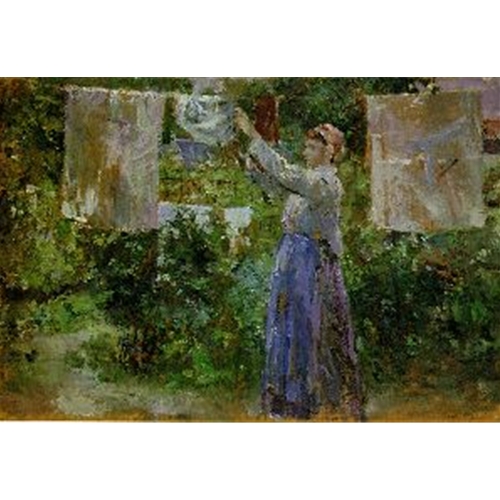 Peasant Hanging out the Washing (1881) by Berthe Morisot

Well, since you asked:
http://scienceblogs.com/casaubonsbook/2011/03/im_going_to_be_just_like_…

Continue teh epic FAIL Star Trek Boy, and we will continue to laugh.

Interesting, such juvenile behavior from apparent denialists. When one has a very weak case, that's when the Ad Hominem attacks start coming out. Since the word Skeptic should only truly be applied to intelligent, thoughtful people, I'll withhold using that term here. I wonder if they are juveniles or just pretend? Oh, all y'all juvies might want to look up Ad Hominem and start reading up all the other logical fallacies... based on what I've read here and elsewhere, you could really use an understanding of where all the arguments break down.