And Yet Another Gold Foil Figure Die from Zealand 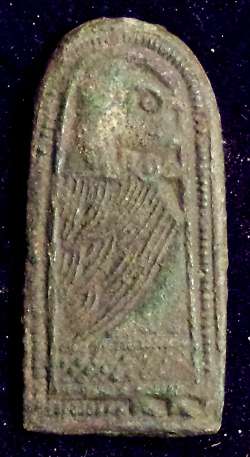 Guldgubbar are tiny pieces of gold foil with (usually) embossed motifs. They most commonly depict single men, then embracing couples, then single women, all in fine clothing. They date from the Vendel Period (540-790) and seem to have been religious artefacts. Usually they are found in the remains of elite residences, concentrating in and around roof-bearing postholes in the main hall. They form this gold-poor period's continuation of the Migration Period's gold bractate pendants and other sumptuous goldwork.

Gold foil figures weren't necessarily made where they are found. They are eminently portable, and identical ones have been found at multiple sites. But if you find the copper-alloy dies they were stamped on, then you've probably located a production site. And unlike the tiny foils themselves, the dies can be located in the ploughsoil by means of a metal detector. We know of fewer than 25 such dies. In 2007 I was lucky enough to direct fieldwork where Niklas Krantz found the northernmost one known to archaeology: at Sättuna in Kaga outside of Linköping. The Sättuna die (below) shows a single woman seen in profile, opening her mouth to speak or sing and lifting her hand in an imperious gesture.

On 23 February Danish metal detectorist Dennis Maigaard found a closely similar die while working with a county museum. It has the Sättuna lady's sideways displaced feet that suggest she's sitting down, it has the great disc-on-bow-brooch under her jawline, but it hasn't got the raised hand. The site is a known elite one at Boeslunde on SW Zealand that has yielded at least one die before. I wish Swedish archaeology would collaborate more with people like Dennis instead of putting destructive legal obstacles in their way!

I've covered dies from Zealand before: here and here. Thanks to Hans Henrik Hansen for the photograph and to Tobias Bondesson for information.

Martin, that is a double edged blade - once you arrive a couple of times on the burial field to see that everything has been brutally dug up and looted, it kinda gets hard to find it in yourself to not wish they all would find themselves dead in a hurry...
Of course, there are also a decent people who only see it as a hobby and willingly work with authorities, yet, it seems, that a steady majority, at least here, are simply grave robbers of the worst variety.

I know things are different in your country. But this is Scandinavia. Our protection laws are old and powerful. Our population is well educated and wealthy. Our metal detectorists make much more money just going to work than they would if they looted sites.

Well, as I understand, there is some sort of cooperation in that regard in Sweden, is it not? I seem to remember reading that original discoveries in Uppakra where done thanks to metal detection?

There have been only a few local and temporary collaborations with detectorists in Sweden. The Uppåkra investigations were re-started when Danish detectorists contacted archaeologists at the University of Lund...

Artis, Here is a good summary of the cooperation between the hobby and archaeologists in Denmark

Since the early 1980s, metal detector surveying conducted by amateur archaeologists has contributed significantly to archaeological research and heritage practice in Denmark. Here, metal detecting has always been legal, and official stakeholders pursue a liberal model, focusing on cooperation and inclusion rather than confrontation and criminalization. Like no other surveying method since the invention of the shovel, the metal detector has contributed to increasing enormously the amount of data and sites from metal-rich periods. Virtually all of the spectacular and ground-breaking discoveries of the past decades are owed to metal detectors in the hands of amateur archaeologists. And it is these finds and sites that today constitute one of the very foci of archaeological research. This article provides an overview of the current status of liberal metal detector archaeology in Denmark 30 years after its inception, and attempts to identify the reasons why this popular hobby never developed into the problem it has become in other parts of the world. It concludes that the success of the liberal model in Denmark is the result of a very complex interplay of legislative, historical, cultural, and social factors. On this basis, it is discussed whether the Danish experience can be used as a source of inspiration in the necessary progression towards a new legal agenda for responsible metal detector archaeology.

Maybe! I sure wouldn't mind discovering another context where guldgubbar can reliably be found.

It will be interesting to see the results from Västra Vång!

A few 'Guldgubbar' have been found in the sand of the beach of Eastern Scania near Ravlunda. martin has wrtten about this.

@Thomas - ooh, whereabouts? I live near there. (Mental picture of grubbing in sand with bare hands, cackling and extracting many small gold foil items...)

Jane, the sites are just south of the stream mouth at Ravlunda. Here's an article about recent fieldwork there.

@Birger - yes, that's right, Ravlunda is a semi-tropical paradise. Skånsk cuisine is well known for its use of fresh coconut juice.

@Martin/Tobias - thanks for the articles, very interesting. Looks like it was quite a major high status settlement. Although to my eyes, the location is unusual; low lying with no features aiding defence, no sheltered harbour, no particular natural resources. Or is that normal in this part of the world?

Jane, on the availability of harbors near the settlement, I am not sure about the effect of post-glacial rebound on the coast since. Further south some coastal regions have actually been sinking, due to the rigid litosphere acting like a see-saw. So knowing what the old coastline looked like can be difficult.

The mouth of the stream north of Maletofta should be OK as a harbour for that period's shallow-draught ships.

Checking the shoreline for 1050 cal AD at http://sgu.se, I find that it hasn't moved significantly.

As for natural resources, these polities were based on agriculture, slave labour and raiding. Coastal Scania is great for all these activities.

Great Links about Maletofta.! Thanks!
So Maleofta was the first site in current Sweden where 'Guldgubbar' was found in 170 BC?

Birger, while I don't have time to read that PLOS One article carefully, some attempts to solve problems in historical linguistics with lots of computers and Markov chains have been strongly criticized ( https://www.youtube.com/watch?v=4jHsy4xeuoQ https://tinyurl.com/nl22p7c
). That makes me nervous about the article and its methods, although I am comforted that the first author teaches linguistics. Its definitely an interesting problem ...

As my adopted Polish Jewish uncle used to say "Stupid English language."...."...was found dating from 170 BC".

Wikipedia says Scania has some of the most fertile soil in the world. Sounds like an incentive.

(OT) We interrupt the usual programs to bring skeptic readers this morsel: “spiritual archaeology.”
http://freethoughtblogs.com/dispatches/2014/03/13/benefiel-america-curs…
“Now here’s a meeting of conspiratorial minds. Cindy Jacobs, she of the bottomless spaghetti bowl*, and John Benefiel, another self-declared “prophet” who thinks the Statue of Liberty is demonic and that he can cause earthquakes with prayer,
meet to discuss how America is cursed because the Egyptians dedicated the country to Baal, thus giving Satan a “legal right” to interrupt God’s blessings. They call this “spiritual archaeology.”
*She literally claimed that Zod provided spaghetti from her bowl than she had put in. W hile that may be a feature of RPGs, it is raely encountered in reality.

I need to get a major project going with these people!

Erratum: She claimed god had provided *more* spaghetti than she had put in the bowl... I think there is a RPG term for that.
-1790 BC would be a curiously precise date :)

Martin, do you know if there's a danish site similar to this http://sgu.se, ?

I don't know. Write to a Danish quaternary geologist and ask!