About The Fifth Report Of The Intergovernmental Panel on Climate Change

Eight hundred and thirty or more authors and editors representing eighty five countries wrote this thing. It is about climate change, and reflects pretty much all of the current (except the most most current of course) peer reviewed literature on climate change, with the intention of providing the basis for governmental policy related to this topic. 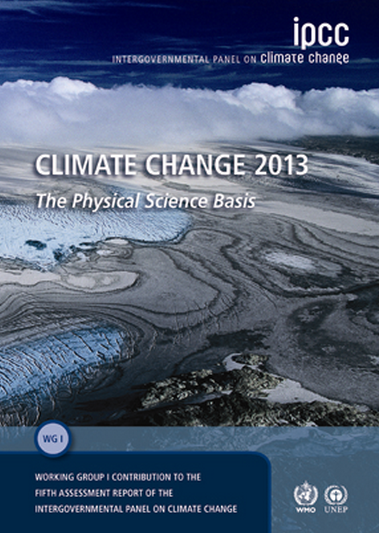 In contrast, non-human, natural, effects on the climater over thisp eriod are in the range of −0.1°C to 0.1°C superimposed on a natural variability within the climate system of the same order of magnitude.

So, that's settled. Let's not fiddle around with that argument any more, please.

Dan Nuccitelli has a nice summary of the documentation of human influence here, Real Climate discusses the report here, and Joe Romm has something here. Also, Peter Gleick asks "What does the IPCC say about water?" Oh, and Mark Hertsgaard notes that "Bill McKibben should feel vindicated today." Andrew Revkin's summary is here.

What does this mean, in terms of policy? Peter Frumhoff of the Union of Concerned Scientists notes the following:

The IPCC’s Summary for Policy Makers (SPM) tells us that global average surface temperatures have risen about 0.85° C since 1900. It concludes that “cumulative emissions of CO2 largely determine global mean surface warming by the late 21st century and beyond” – in other words, the principal driver of long-term warming is total emissions of CO2. And it finds that having a greater than 66% probability of keeping warming caused by CO2 emissions alone to below 2° C requires limiting total further emissions to between 370-540 Gigatons of carbon (GtC).

At current rates of CO2 emissions (about 9.5 GtC per year), we will hurtle past the 2° C carbon budget in less than 50 years. And this conservatively assumes that emissions rates don’t continue on their current upward trajectory of ~3 percent per year.

So, we need to take care of that little problem. One thing we might consider along these lines is NOT APPROVING KEYSTONE XL PIPELINE PLEASE. (Anybody listening?) I mean, I know it's repression and all, keeping all that carbon trapped in the ground. In fact, it so repressive Coal and Oil have written a song about liberation, sung here by Andy Revkin:

I have been flat out busy with teaching on the topic of parental investment and carrying out actual parental investment all week, so I am not going to say anything smart about this report today. But I will on Sunday Morning, 9:00 Central time on Atheist Talk Radio where I'll be updating everyone on this report. More specifically, I think, I'll be speaking with Stephanie Zvan on the current short list of things people have got wrong (mainly because of climate science denailism) about climate change. This is very closely related to the report because these recently generated or reinvigorated anti-science memes have been brought out of the zombie stable just over the last few weeks precisely because this report was to come out today. So, the memes and the report will do battle Sunday Morning in the southern suburbs of Minneapolis. If you oversleep or are in church or something, no matter, there will be a podcast.