Weather Whiplash, and What Does (The) Fox Say?

Paul Douglas send me this photo: "Check out the piles of melting slush in the foreground; looks like half a foot (?) of dirty snow in that one clump. This takes weather whiplash to a new (and ridiculously jaw-dropping) level. Photo courtesy of Dana Cottingham Fricke, from Concord, Illinois."

The biggest loss of containers from a container ship (that didn't just plain sink) happened a few days ago as the Svendborg Maersk was battered with hurricane like conditions including Waves Of Unusual Size generated in the Global Warming Enhanced megastorm, while at the same time tornadoes, some snownadoes, touched down in various places in the US.

Fox News is lost and confused. From Media Matters:

Snowstorms and cold weather chills swept from the Midwest to the East Coast in January, closely followed by conservative media snow-trolls casting doubt on global warming. But what the conservative media didn't mention was that the world as a whole was experiencing warm temperatures, leading to January becoming the 347th consecutive warmer-than-average month and the fourth warmest on record.

On February 20, the National Oceanic and Atmospheric Administration (NOAA), released the findings that January 2014 experienced global temperatures 1.17°F warmer than the 20th century average, making it the fourth warmest January on record. NOAA data shows that the last time the planet experienced a month colder than the 20th century average was February 1985 -- 29 years ago.

How could this be, when Fox News is telling you that the snowstorms in the United States are a reason to doubt global warming? The answer lies beyond the lower 48 states, which make up only 1.5% of the Earth's surface. While some regions in the contiguous U.S did experience a colder-than-average month (none a record cold month), most of the globe did not: 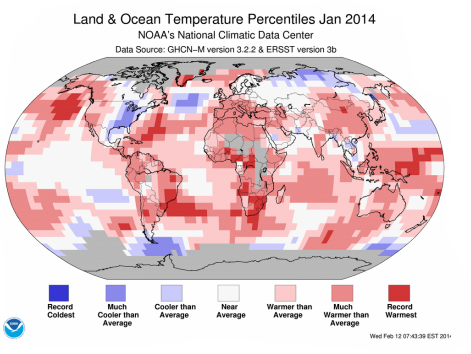 And here's the crazy Fox Newsers for your entertainment:

And here's a nice meme that describes the Fox Problem: