We just experienced the warmest two months (May and June) on record, meaning, essentially, in well over 100 years. This is because of anthropogenic global warming (AGW). Does this mean that 2014 will be the warmest year on record? Probably not, in part because February was pretty cold and that lowers the score for the year. But it will be a warm year.

There is a strong correlation between the temperature in June and what turns out to be the global mean for the year. This can be shown empirically by calculating a simple correlation coefficient for each month of the year and the year's average. For this I used the GISS anomaly data.

Clearly, the ability of a month to predict the year follows a seasonal march, with June and its sibling months performing the best. I asked Michael Mann about this and he told me, "I think it is simply a consequence of signal-to-noise. Boreal summer has a large signal-to-noise ratio because the effects of radiative forcing are relatively large compared to those of internal atmospheric dynamics. Winter on the other hand tends to be dominated by synoptic and planetary-scale dynamics, meaning the signal of forcing is buried in more noise."

Makes sense and the data shows this.

So let's use June to predict 2014. Running all the data from GIS through a simple regression model, we get this:

Yeah, I know, no axes lables. This is just a quick and dirty exercise in Science by Spreadsheet! This is June temperature anomaloy on the X axis and annual on the Y. The black regression line has the indicated R-squared and model formula. I added a second order polynomial regression line (in red) to check to see if the ability to predict goes haywire for the higher temperature values (which are also the more recent years). I'm going to say it doesn't, though if we do a similar model regressing the second half of the year on the first, there is a skew with the higher (and thus later) values:

So, I'm reasonably confident that June is a good predictor of the year, though I'm also sure that this method won't predict the exact ranking for a given year. But we can try it anyway. Here is a list of all of recent years sorted by how hot it got (using the same data) with 2014 added in as a prediction (the rest of the GAT numbers are observations). 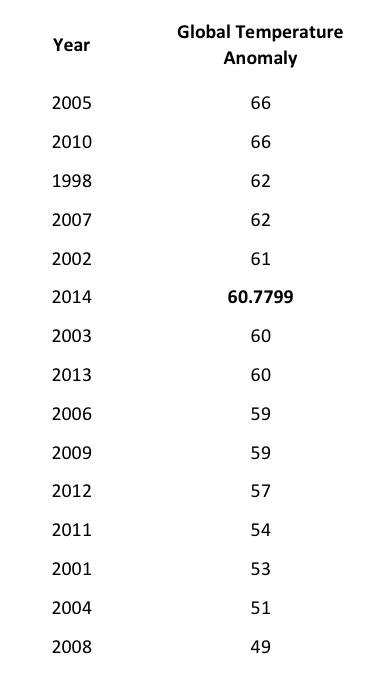 Using this table we can see two things. First, it would take only a small difference from the prediction to move 2014 up or down. The average amount the predictions for these years are off is actually large enough to move 2014 up to the third slot, or down to the tenth slot or so, very easily. But given only this prediction, we might expect 2014 to tie as the fifth warmest year (if we round it off) or to be the sixth warmest year, more or less.

This assumes we don't have warming effects of an El Niño this year. If we don't I'm going to guess that 2014 will be about in the middle of the top ten years ever. If we do have an El Niño that affects temperatures during the last few months of the year, we could see a 2014 that is closer to the top of the pile.

That's my story and I'm sticking to it. Until more data comes along and then I'll revise as needed, of course.

OT from The Siberian Times:

For the record the verdict is now officially in :

The rocket scientists (& NOAA and many others) have observed, checked and found that last year was the hottest year on record yet.

I hope you don't mind, Greg Laden if I use this old post as one of a good number of examples of how us so-called "alarmists"* often actually under-estimate and err on the side of caution in their predictions which can fall short of what actually happens.

IOW. Things are often going to be - indeed have been - worse than the climatologists and those supporting the consensus on Human-Induced Rapid Global Overheating (HIRGO) have predicted.

* As if its a crime or somehow wrong to raise the alarm when there's good reason to do so. Like "do-gooder" its a word thrown out as an insult that really shouldn't be seen as such.

BTW and off topic - is there no 'older comments' linky-thingamahjig here or is it just me not seeing one?

Not sure what you mean by older comments. There are only three comments on this post, probably because it was posted during a flurry of activity elsewhere.