While reading an AP attributed article on Huffington post about Super Typhoon Haiyan (also known as Yolanda), I did a double take at this paragraph:

Weather officials said Haiyan had sustained winds of 235 kilometers per hour (147 miles per hour), with gusts of 275 kph (170 mph), when it made landfall. By those measurements, Haiyan would be comparable to a strong Category 4 hurricane in the U.S., and nearly in the top category, a 5. Hurricanes, cyclones and typhoons are the same thing. They are just called different names in different parts of the world.

It struck me because "nearly in the top category" was not consistent with material I had read on Jeff Masters' Wunderblog, material such as this:

After spending 48 hours at Category 5 strength, the strongest landfalling tropical cyclone in world history, Super Typhoon Haiyan, has finally weakened to a Category 4 storm. With top sustained winds of 155 mph [edit: this is down from the peak figure of 195 mph], Haiyan is still an incredibly powerful super typhoon, but has now finished its rampage through the Central Philippine Islands, and is headed across the South China Sea towards Vietnam. Satellite loops show that Haiyan no longer has a well-defined eye, but the typhoon still has a huge area of intense thunderstorms which are bringing heavy rains to the Central Philippines. I've never witnessed a Category 5 storm that made landfall and stayed at Category 5 strength after spending so many hours over land, and there are very few storms that have stayed at Category 5 strength for so long.

Additionally he reported this for top wind speed data and historical context:

Three hours before landfall, the Joint Typhoon Warning Center (JTWC) assessed Haiyan’s sustained winds at 195 mph, gusting to 235 mph, making it the 4th strongest tropical cyclone in world history. Satellite loops show that Haiyan weakened only slightly, if at all, in the two hours after JTWC’s advisory, so the super typhoon likely made landfall with winds near 195 mph. The next JTWC intensity estimate, for 00Z UTC November 8, about three hours after landfall, put the top winds at 185 mph. Averaging together these estimates gives a strength of 190 mph an hour after landfall. Thus, Haiyan had winds of 190 - 195 mph at landfall, making it the strongest tropical cyclone on record to make landfall in world history. The previous record was held by the Atlantic's Hurricane Camille of 1969, which made landfall in Mississippi with 190 mph winds.

It took me longer than it should have to sort this out because in both the AP text and Jeff Masters' text appears the figure of 235 and I must confess some initial confusion because I did not immediately notice one was a figure for sustained winds and in kilometres per hour and one was for gusts and in miles per hour, so I assumed the same figures were in play even if the conclusions were so different.  Anyway, I read the first passage in several places so I had to check it out.

The Saffir-Simpson hurricane wind scale is what the US government, weather agencies and media use and is what the AP article was referring to.  There are other tropical cyclone scales in use and they vary in their category naming, delineations and wind speed definitions.  As best as I can work it out, Haiyan is in the top category of all of these scales.  This is what one would expect if Jeff Masters is correct in his historical placement of Haiyan, as he is.  For example, the Joint Typhoon Warning Center reports that Haiyan's top sustained winds reached 170 knots (315 kph, 196 mph).  This is using "sustained" to mean a one minute average, as does the Saffir-Simpson scale.

In the Saffir-Simpson hurricane wind scale the delineation for a category 4 storm is 130–156 mph, (113–136 kn, 209–251 km/h).   At 170 knots (315 kph, 196 mph) is well into category 5 territory.  But the AP text states "sustained winds of 235 kilometers per hour (147 miles per hour)", which does fall short of category 5.  I think the mistake they have made is that they have used a weather bureau's definition of "sustained", which is a 10-minute average, and applied that figure to the Saffir-Simpson scale which wants a 1-minute average.  I do not know what the exact source for the 147 mph figure is, but I have noted that on the Wikipedia page for Haiyan, the maximum 10-minute sustained figure is 145 mph and the AP article attributes that number to "weather officials" so they probably do have an accurate number despite not understanding what it means.

I'm sure this mistake will provide fodder for climate obfuscationists for many months and and will reappear years from now, and indeed I note that Marc Morano is already touting that phrase as evidence of "alarmist exaggerations".

But let's inject a little humanistic realism into the whole issue and recall that whatever you might want to say about its technical description, Haiyan's destruction is awesome and terrifying, and it is historic.  The denialist talking points about how its not as bad as those alarmists are telling you truly fall down in the face of the images coming from the aftermath.  Who do you want to believe, Marc Morano or your lyin' eyes? 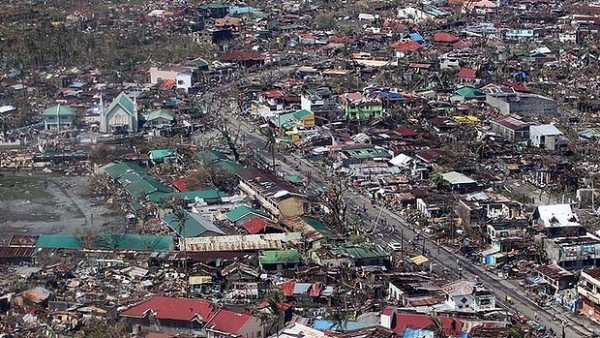 [Update: WUWT goes all in comparing one weather agency's 10-minute average figure to the widespread use of the 1-minute figures actually relevant to typhoon strength and he of course cries "Lies! Lies!"  Commenters have pointed this mistake out to him, but somehow that has not made it into any of the 10(!) updates to that post.  Quelle surprise...]

One of the problems with Cat 5 is that below 190 mph, good brick/concrete buildings stand (take a look at the church in the middle of the picture)

I see your point, and perhaps the SS scale should also be revisited the way the F one was. Change the wind speed delimiters but not the category destruction definitions.

It would bring up another complication in that a storm's "true" assessment would really depend on where it is making landfall. Category 5 would have a lower threshold striking a more poorly constructed third world country like Louisiana vs Hong Kong.

I'm going to suggest it is all a bit of an academic exercise. Whether the storm was Category 5 or 1 makes no difference to all those destroyed houses. And it should not make any difference as to whether or not the residents are advised to evacuate - that should be based on the wind speeds and storm surges etc (which are very much dependent on the tide at the time the storm hits).

For a Cat 5 storm, considering the strict building codes and rigid enforcement, NOT, there certainly seem to be a lot of roofs left on. I was expecting to see pretty much every non-reinforced building to be flattened and pounded to kindling like buildings on the coast after Katrina.

Not that that proves anything. Perhaps this area was farther away from the eye-wall then other areas. Perhaps the tight clustering of the buildings helped. Maybe they just plain got lucky.

What mandas said.
Also, why all the irrelevant concern over a single data point?
This is hack territory.

Single data points do take on some significance when they represent new extremes (eg wind speed at landfall). Also, the spinning of the event we are and will continue to see is worth taking note of for those following the climate change debates...

Agreed that those issues take a back seat to the tragic destruction at this period of time.

Remember, anecdote is only valid data if you're using it to deny the science of the weather, coby.

coby, what is the *purpose* of the storm categorisation?

If it's how much damage it does, then it DOES MORE DAMAGE if it hits a poor town than a rich one.

If it's how fast the wind was, then use the wind speed.

If it's how much energy it had over "no synoptic scale picture", use the energy.

January 3, 2017
A fascinating press release I want to pass along.  At first I thought it was maybe good news in that rising sea levels would slow glacier drainage into the oceans but the affect is the opposite: For the first time, researchers have closely observed how the ocean's tides can speed up or slow down…

The Earth is Not Moving

July 25, 2016
"In order to save the dying heliocentric theory from the conclusive geocentric experiments performed by Michelson, Morley, Gale, Sagnac, Kantor and others, establishment master-mind Albert Einstein created his Special Theory of Relativity which in one philosophical swoop banished the absolute…

2015 Was the Hottest Year on Record by a Long Shot

January 29, 2016
An illustrative graphic from Bloomberg.com arrived in my inbox.  As they put it: "We just obliterated another heat record." To view it, you'll have to head over to here: 2015 Was the Hottest Year on Record by a Long Shot

January 20, 2016
I will allow comments through by default for repeat commenters again, first time commenters will still need an initial approval. I will however now be a more active moderator and delete things that are useless or unnecessarily personal from now on, except on this thread. This is unavoidably…

August 24, 2015
August 13th was Earth Overshoot Day. The correct date, if calculated precisely, would come earlier and earlier each year, the current choice is just an approximation. This year, the year 2015, by sometime around August 13th, humanity had consumed as much of what we require from the lands and seas…