How to admit you're wrong

We all make mistakes. And even the most humble among us can be a little self-righteous when it comes to our pet projects. But when was the last time you came across a self-righteous pseudo-skeptic who had the decency to admit to getting it completely wrong? Meet Steven Goddard of The Register, a peculiar little news outlet published in London. Sort of. Goddard wrote a piece that appeared on Aug. 15 under the bold headline "Arctic ice refuses to melt as ordered." As anyone who has been following the plunging arctic sea-ice extent graphs at the National Snow and Ice Data Center can attest, this is a rather peculiar interpretation of the data.

Goddard's article is rife with scientific errors and evidence of his lack of familiarity with the science. His main argument, that the ice area up there is 30% larger than last year, not just 10%, is the product of the fact that Goddard based his story on his own analysis of images from the NSIDC and other sources. That analysis, which consisted entirely of counting white pixels, led to language like this:

The Arctic did not experience the meltdowns forecast by NSIDC and the Norwegian Polar Year Secretariat. It didn't even come close. Additionally, some current graphs and press releases from NSIDC seem less than conservative. There appears to be a consistent pattern of overstatement related to Arctic ice loss.

Which prompted the good people at the NSIDC to offer a rebuttal. It turns out that Goddard got confused because he didn't take into account map-projection distortion differences between competing images. Walt Meier of the NSIDC wrote that

Besides this significant error, the rest of the article consists almost entirely of misleading, irrelevant, or erroneous information about Arctic sea ice that add nothing to the understanding of the significant long-term decline that is being observed.

Once that little problem is dispensed with, it turns out that there is no discrepancy, the arctic is melting faster than normal, and may yet break last year's record. Or not. Even if Goddard had been right, though, that says nothing about long-term trends. The point is, as Goddard proved, if you're going to argue that an entire field of scientists got it wrong, you really should know something about the subject.

To Goddard's credit, though, he admitted his mistake:

"Dr. Walt Meier at NSIDC has convinced me this week that their ice extent numbers are solid. So why the large discrepancy between their graphs and the UIUC maps? I went back and compared UIUC maps vs. NASA satellite photos from the same dates last summer. It turns out that the older UIUC maps had underrepresented the amount of low concentration ice in several regions of the Arctic. This summer, their maps do not have that same error. As a result, UIUC maps show a much greater increase in the amount of ice this year than does NSIDC. And thus the explanation of the discrepancy.

"it is clear that the NSIDC graph is correct, and that 2008 Arctic ice is barely 10% above last year - just as NSIDC had stated."

The outstanding problem, however, is what to do with all the bloggers who picked up Goddard's original story and haven't followed up with a retraction of their own.
As Joe Romm points out at Climate Progress, plenty of climate denialists have either failed to keep up with the news, or refused to do what's right. Sorry, Alan Lovejoy of Chronos, but it is NOT "becoming ever more apparent that reality is throwing a bucket of cold water on the idea of anthropogenic global warming. No, "Colorado Right" it's NOT because "the blessed Algore (may someday he gain some intelligence) bought all those carbon credits from himself." And sorry, Paul Joseph Watson of The Revolution Will Not Be Digitized, but reality has indeed matched "the hype of the climate doomsayers."

Incidentally, Joe's post on this subject is better than this one, but as Kevin Grandia writes at DeSmogBlog,

Unless Goddard, or intrepid DeSmog readers, have the time to go out and urge bloggers to correct this latest misinformation, it will be popping up as yet another false piece of information on the true state of our planet and the realities of global warming for some time to come. And as the old adage goes , "If you repeat something long enough it eventually becomes true.

So let's call them on it, people. Here's the latest sea-ice extent graph from the NSIDC: 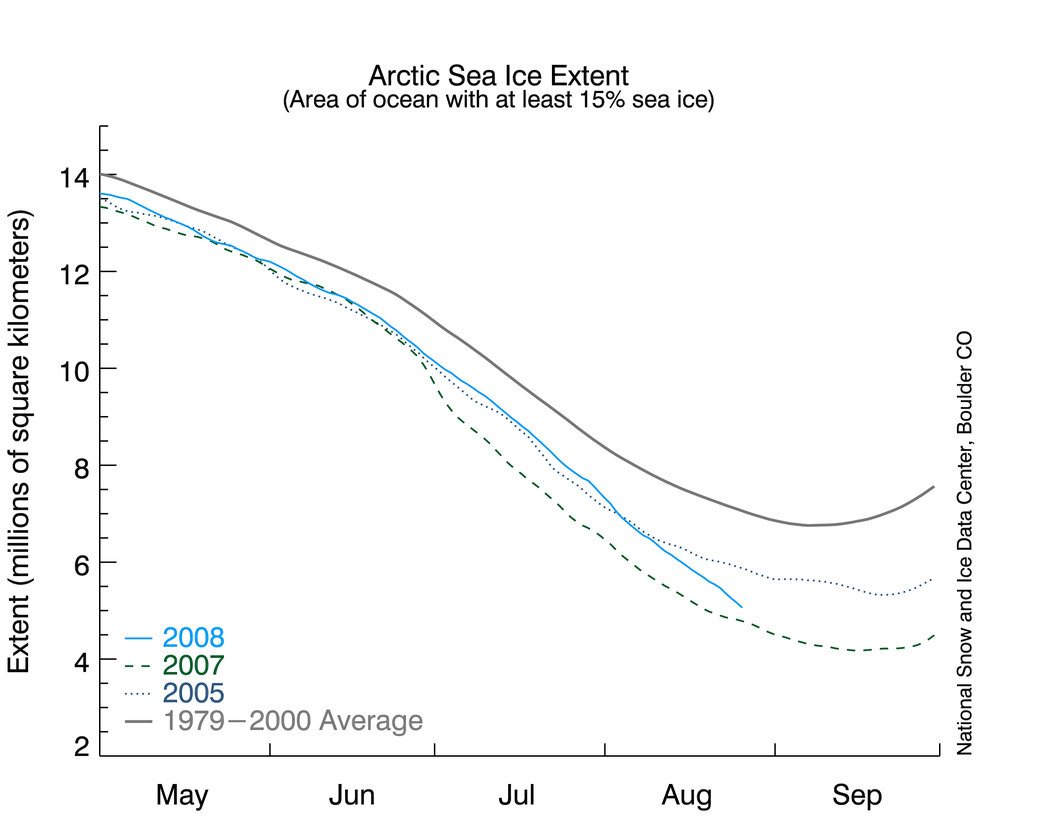 The Register has definitely gone downhill since they climbed on the denialist bandwagon... They recently had some guy going on about how the EPA convinced Peru to stop chlorinating their drinking water, which he claimed led to a massive cholera outbreak. I posted a comment with references to (and quotes from) a couple of peer-reviewed studies which showed that the outbreak occurred in areas that were never chlorinated in the first place, that the public water supply wasn't the main vector, and that the reason chlorination wasn't expanded was a lack of money rather than pressure from the EPA, yet for some reason it never made it out of moderation...

Still, they've always self-consciously positioned themselves as the National Enquirer of the IT industry, so I find it hard to get too worked up about it.

El Reg may aspire to be the National Enquirer of IT, but they generally end up on par with say Weekly World News. The only thing worth reading there is BOFH and even that's gone downhill significantly over the years.

The Register is still very good at its core business: taking a skeptical look at IT hypes (although it used to be better at that too.) But its science reporting has been a disaster since their previous science editor Lucy Sheriff left.

Previous commenters make a common spelling error, similar to the ensure/insure conundrum. The alternate news source they really entended to reference is The Inquirer, also of London town.

There. Fixed that for ya.

Don't have to: I'm never wrong.

Al Gore putting a horse's head in Steve Goddard's bed does not qualify as convincing research.

Paul Watson is a complete moron, typically in the conspiracy theory department. I don't trust what that man has to say about anything.

Dose it worry anyone else that the slop of this years line is steeper then last years? Or am I just high

Of course no mention of the fact that the Antarctic sea ice extent reached an historical maximum this past season.

I see uncle Al taught you well at his climate camp.

I see uncle Al taught you well at his climate camp.

And I see that you flunked statistics.

Lance: the increase in Antarctic sea ice is a consequence of global warming. You can look it up.

It's true: things that are a consequence of global warming include, in addition to the increase in Antarctic sea ice, record snow pack in the north, record low temperatures in the southern hemisphere, hurricanes, droughts, rainfall amounts, forest fires, insect migrations, disease, bad breath, bad posture, bad marriages, bank failures, crop failures, machinery failures, etc. Anything, indeed everything, is a consequence of global warming. You can look it up.