What are tumor suppressor genes?

I'm trying to raise money for the The Leukemia &amp Lymphoma Society, and I promised to do a few things if we reached certain goals. I said I'd write a post explaining what tumor suppressor genes are, while wearing a pirate hat and nothing else, if we raised $5000. Shiver me timbers, I did! And it's cold!

If you want more, go to my Light the Night fundraising page and throw money at it. I'll write about microRNAs and cancer when we hit $7500. Note that we're also getting matching funds from the Todd Stiefel Foundation, so join in, it's a good deal.

There's a basic principle in biological homeostasis (and it's also true in cybernetics) that for every process that turns something on, you have an anti-process that turns it off. When you look at what's going on inside the cell, you'll often get the impression that it's spinning its wheels — every protein, for instance, is being degraded at about the same rate that it's being synthesized. The whole cell is in a state of dynamic equilibrium, in which it might look like the concentration of some protein is constant overall, but when you look closely, individual protein molecules are being constantly made, instantly targeted for destruction, and dismantled…only to be nearly instantly replaced by a duplicate. Everything is in a state of flux, and it looks terribly wasteful, but it means that everything is fluid and flexible and the cell is incredibly responsive to subtle cues.

While acting in opposition to oncogenes, tumor suppressor genes typically exhibit another difference in behavior that sets them apart. Cancer causing mutations in oncogenes are usually dominant: that is, the mutation doesn't just knock out the gene, it has to make a hyperactive gene, and just one mutant copy gone rogue is enough to start switching on cellular activity. Tumor suppressor gene mutations tend to be recessive.

The best known tumor suppressor gene is BRCA1, and it exhibits this behavior. BRCA1 is a good gene -- it's working to protect you from breast cancer. For most of us, every cell in our body has two functional copies of BRCA1. It's like having two cops patrolling the beat, prepared to fight off any cancer threat, and for cancer to succeed, it has to kill off both. Even one left functional can suppress any effort by the cell to go hyperactive and proliferate. A mutation that knocks out one copy is rare, but two mutations that knock out both are even more rare — it follows two-hit kinetics, which means you multiply the probability of the two events together.

You will occasionally hear about someone being at high risk of cancer because they carry a bad allele of BRCA1 — Angeline Jolie was in the news about this recently. What has happened here is that the person was born inheriting one broken copy of the BRCA1 gene -- their cells only have one cop on the beat. They aren't born with cancer — that one copy of BRCA1 is sufficient to keep them safe — but now they are at much higher risk of an accidental mutation taking out their sole protector than if they had two.

Another well known tumor suppressor gene is Rb, the gene that when mutant can lead to retinoblastoma, or cancers of the eye. It also exhibits two hit kinetics, in that familial retinoblastoma is caused by inheritance of one mutant Rb allele, so that all it takes is one mutation later in life to lead to cancer. Sporadic retinoblastoma, that is retinoblastoma without previous examples in the family, is much rarer, because it requires a first somatic mutation and a second mutation later to take out the second copy. 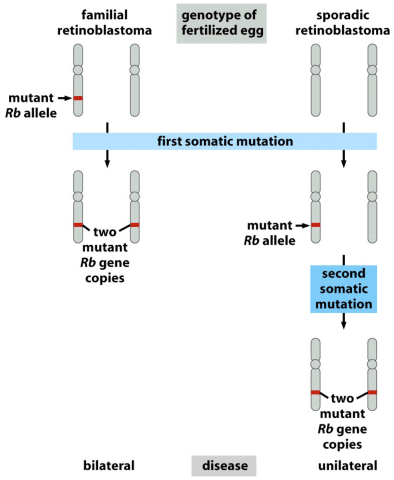 Having an enabling mutation in one copy at birth so greatly increases the chance of retinoblastoma that afflicted individuals are likely to have bilateral cancers affecting both eyes, while it's so rare in sporadic cases that it is almost always unilateral, affecting only one eye.

OK, you understand the principle. Last time, I wrote about the oncogene Ras, which, to make it simple switches on the mitotic machinery and promotes cell division. Does it have an anti-gene product that opposes Ras and switches off cell division?

Of course there is. Several actually. One example: recall that I told you that Ras is activated by binding GTP, and deactivated by converting GTP to GDP, and that Ras itself has GTPase activity and therefore works to switch itself off. There are also tumor suppressor proteins that are called GAPs, or GTPase activating proteins, that enhance Ras's GTPase activity. One of them, called NF1 or Neurofibromin, binds to Ras and elevates its potency as a GTPase approximately 1000-fold — it basically makes Ras ultra-good at shutting down and doing nothing.

Oncogenes and tumor suppressors are the yin and yang of cellular regulation. Cancer cells often contain hyperactive oncogenes, and have shut down tumor suppressors…which suggests that one strategy for treating cancer is to develop inhibitors of oncogenes, and to repair, replace, or elevate expression of tumor suppressors. And that's a rather pat explanation of some viable general strategies that of course encounter all kinds of additional complexities.

The posts where PZ pretends he is a scientist are my favourites.

The code for special characters is &<character name>;

The final semicolon is necessary to complete the code, so for instance an ampersand would be: &amp;

In the intro and blurb, PZ forgot the final semicolon, which is where the &amp comes from. It's a tendency I share.

pretends he is a scientist

By what criteria is he not one?

"By what criteria is he not one?"

I think Jim-Bob McDuggan was making a joke.