The difficult-to-spell name "Schenectady" (where Union is located) derives from a Mohawk word meaning "beyond the pines." The pines in question are an extensive region of pine barrens between Albany and Schenectady, a small bit of which survives as the Albany Pine Bush Nature Preserve. They've got a nice little nature center and some trails through the pine bush, and I took The Pip down there this morning, because his day care was closed again for the last of the fall block of Jewish holidays. Here's a shot to give you an idea of the landscape: 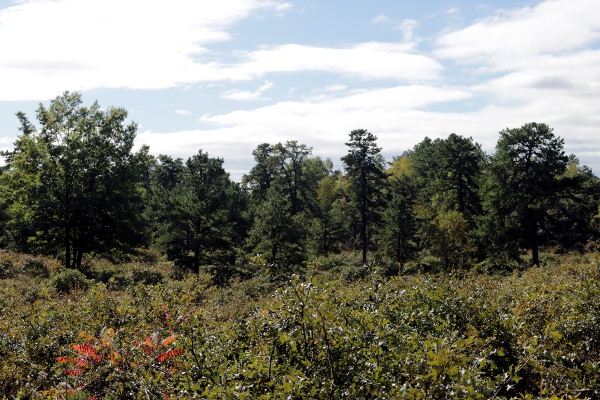 Unfortunately, this was as far as we got into the preserve, as the Little Dude wanted nothing to do with any kind of outdoor activity. He rampaged around the (rather small) visitor center for a while, and after lunch was very happy to run in circles in one of the local shopping malls, but he just did not want to be outside, despite the fact that it was a beautiful day today.

As someone who grew up in a rural area, I find this very frustrating, but, you know, there are worse forms of rebellion. I'm going to have to go back there by myself one of these days, to get a real look around.

Tomorrow, we're done with Jewish holidays, and back to the regular day care routine. And while I did have a lot of fun hanging out with The Pip, I'd be lying if I said it wasn't a relief to be handing him off to somebody else to entertain during the day...