I keep falling down on my duty to provide cute-kid content, here; I also keep forgetting to post something about a nerdy bit of our morning routine. So, let's maximize the bird-to-stone ratio, and do them at the same time.

The Pip can be a Morning Dude at times, but SteelyKid is never very happy to get up. So on weekday mornings, we've developed a routine to ease the two of them into the day: SteelyKid has a radio alarm, and then I go in and gently shake her out of bed. I usually carry her downstairs to the couch, where she burrows into the cushions a bit; The Pip mostly comes downstairs under his own power, though occasionally he needs a lot of badgering to get him out of bed.

Once on the couch, we play one level of Candy Crush on my phone, often while SteelyKid has a small snack. At the end of this, if we beat the level, we get a leaderboard showing our place among my Facebook friends who play, and also Kate's ranking (she's something like a hundred levels ahead of us, so she always has a ranking...).

Once we get those two numbers, we play a math game with them: The kids have to figure out how to combine those two numbers to get their ages (currently five and nine). Allowed operations are all ordinary arithmetic (addition, subtraction, multiplication, division), and also operations between the digits of two-digit numbers. Extra pairs of the starting numbers can be brought in as needed

So, for example, if we're in eighth place and Kate's one spot ahead, the process of getting to 5 would be something like:

"Seven plus eight is fifteen, and one times five is five, then you're done."

And to get to nine would be:

"Eight minus seven is one, then add that to another eight, and you get nine."

SteelyKid learned about square roots at some point, and she's now a big fan of taking the square root of nine to get a three-- so if we end up in second and Kate was seventh, she'll go for:

"Two plus seven is nine, and the square root of nine is three, then three plus another two is five."

I have no recollection of how I started doing this with SteelyKid (it used to be just her, but The Pip decided a few months back that he wanted in on the game), but this works amazingly well to get them to wake up a bit. It's a nice introduction to math-as-a-game, too, which I hope will serve them well down the line.

And there's your cute-and-nerdy kid content. Also here's a bonus photo of the two of them wearing eclipse glasses in preparation for yesterday's solar spectacle: 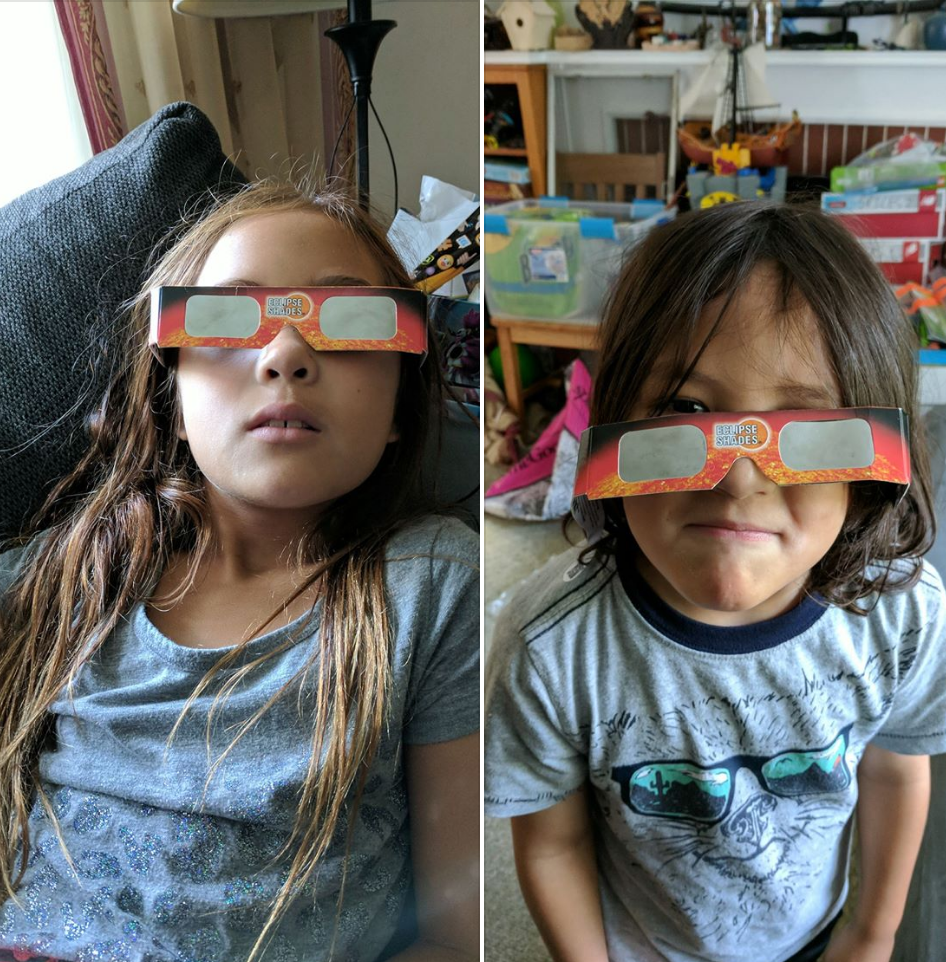 (They were duly impressed by the Sun looking like a crescent moon, up here in 60-odd-percent country. They saw it at day camp; I was waiting for an eye doctor appointment at a local mall, and shared around a set of eclipse glasses with random shoppers and retail workers.)

Good that you are getting the kids into math this way.

Every year my undergraduate alma mater's alumni magazine includes a puzzle to get as many numbers from 1 to 100 as you can out of the digits that comprise the current year. (There is no four-digit year for which all of those numbers are attainable.) You are allowed to combine digits into two-digit numbers, and use standard operations including addition, subtraction, multiplication, division, square roots, and exponentiation. The preferred solution uses as few operators as possible (parentheses used for grouping do not count), and for a given number of operators, solutions that use the digits in order are preferred. So, for instance, you can get 1 out of the digits in 2017 in several ways. 1 + (2 + 7) * 0 works, but 2 + 0 - 1 * 7 is better because it uses the digits in the correct order, and 217^0 is even better because it uses only one operator.