Cambridge half; and misc Today was the anniversary of my glorious 1:36 in the Cambridge Half Marathon. Today, alas, I only managed 1:41 so at that rate Jules will be steaming past me before many more years have passed. I remain fairly confident of out-erging her over the distance though. Here I am with other folk from our rowing club that were running. You'll notice that most of them are female. Maggie in the background, if you were wondering. Onwards, to Brighton.

But other things are happening. You'll have to wait just a little longer for my deeply valuable thoughts on the Ukraine crisis; this post is Misc.

Last night I spent quite a while broswing wiki and reminding myself about the different sorts of supernova and their causes. There's a wonderful majesty and scope to the whole thing. CIP has a nice post on GHGs to the stars, on some speculations about first-generations stars having little "metals" and hence being less radiatively opaque. Fun.

Like many such posts, it has no comments. Which brings me on to DA's plaint about not getting many comments (though he's since cut it back). This is something that I intended to write a whole post about sometime, but I'm not sure I'll get round to now. What gets comments, and what doesn't, has precious little to do with intrinsic quality of the post. I've often thought that lower quality posts often get more comments, because there is something to say in reply. A perfectly formed posting that exhausts its subject is a joy to read, but not to reply to.

An earlier post at QS, Who is Patrick Moore?, probably deserves a wider readership for those who care about the political debate. 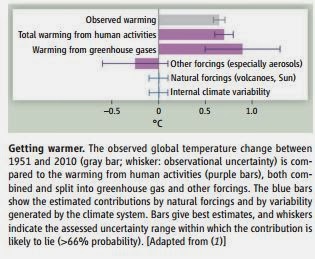 As does this one from which I've taken this image. People sometimes ask, "what proportion of warming is due to GHG's", and appear to expect an answer less than or equal to 100%; they generally can't even begin to understand an answer greater than 100%.

JA is not very impressed with the "pause" or reactions to it. Which seems fair enough. See-also Breaking down the discrepancy between modeled and observed temperatures during the "hiatus" by Troy.

Oh, and finally: I've been making some attempts to sample the delights of on-line education available via the intertubes; it seemed a shame to ignore it all. I didn't get very far with Turn Down the Heat: Why a 4°C Warmer World Must be Avoided on Coursera. I did a bit better with "An introduction to functional analysis" - I'd forgotten how breathtakingly beautiful and simple some of the basics are, like the abstract definition of a continuous function. But in the end, French from Duolingo seems to be getting on best.

It's the law, it seems. And a suitable title for a misc post. I've been busy, which accounts for my pathetic lack of posts recently. * I ran the Brighton marathon (3:46). * We entered the Town Bumps at Oxford, in IVs! * I ran the Head of the Cam again. * I've discovered that Yahoo and Flickr are…

[Another in a series of posts designed to disguise my failure to come up with a daily sea ice bet. But I'll get there.] The backstory: a while ago, last September, some friends mentioned that they were training for the Brighton Marathon and would I like to run the Grunty Fen half marathon in two…

The long-awaited follow-up to Brighton man and about as exciting for non-runners. If you lack patience, the answer is 3:57. Long introduction - you can skip this bit Just like last time, there is a backstory: after Brighton, I'd decided I was going to do more of this nonsense, and so inscribed…

No, not a man with a stoat through his head. Instead, what appears to be an utterly gratuitious waste of time and money: Yes, its a 5x. WTF? Presumably, these people really do have so much spare cash that they can create a new hull [update: more likely a converted coxed four; though rumour says…

Just to make a trivial quibble - first generation or Population III stars are expected to have *no* metals. Second generation or Pop II often have only 10^-5 of Solar abundance. This seemingly minute difference is supposed to account for the fact that there are (apparently) no Pop IIIs around today, even though 12 billion year old Pop IIs are common.

Ergs don't float: I might have to put you both in single sculls :-)

(A single with me in won't float for long either)

[Ah, then you want Devil Duck does Boston -W]

The 'pause' doesn't stand out from the observed variance from the longer term trend:

But the longer term trends are lower than the low end predictions:

Satellite era, as in his second link.

[But why would you start measuring trends only in the satellite era? -W]

William, try the MIT Global Warming Science EdX course. It started 3 weeks ago but it is all online and you can still sign up thru March 12

> [But why would you start measuring trends only in the satellite era? -W]

Because otherwise you can't compare the surface instrumental and satellite trends on the same basis. How is this not obvious?

[That would be obvious if your main purpose was to compare sfc and satellite. But if your main interest was in the trends themselves, it makes no sense -W]

Who is Patrick Moore?

That must be the Patrick Moore (PM)* who appeared briefly in Channel 4's fake Swindle documentary to rant OFF TOPIC about the ozone layer instead of global warming. It is quite possible that neither its director Martin Durkin nor PM himself, really noticed; having learned the art of lobbying mendaciously, they have discovered that it can be applied to almost topic.
----------
*. i.e. the Canadian one, not the British popular astronomical reporter who died recently.

[That would be obvious if your main purpose was to compare sfc and satellite. But if your main interest was in the trends themselves, it makes no sense -W]

I don't think there's a rule saying you can't try to kill two birds with one analysis. If the satellites were a very recent development and we didn't have enough satellite data fro climate trends to emerge, sure, those two purposes might be incompatible but everyone I know of other than the deniers whose interest is in claiming the observational record is too short to claim we know anything for sure (as opposed to the other or sometime identical deniers who claim that anything that happened prior to the past ~17 years is irrelevant) agrees that 1979 to present is plenty long enough for meaningful global temperature trend analysis.

Yeah, comments are not associated with quality, but with controversy. Mainstream tends to be better backed-up than polemists.