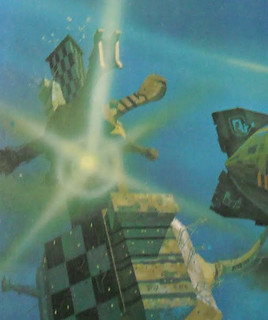 The second Ukraine post, a follow-up to the brilliantly prescient Ukraine: Work as if you live in the early days of a better nation wherein I said:

Miriam says Yes: she thinks “Russian armed forces, on Ukrainian soil, within two weeks” (she declined to say “tanks over the border”, though I think that’s the only way they can do it, if they want to). I say No. perhaps more in hope than in judgement, but my reasoning would be: this is all unexpected. No-one is in place to react quickly. Invading... is very risky, and could go terribly wrong for Putin. Whereas doing nothing except fomenting a bit of bother, and hoping it all goes horribly wrong, is not very risky (he looks a bit stupid and somewhat dissed, but its far from fatal)

There are no tanks over the border, and being Jesuitical I could perhaps press for the idea that the Russians didn't technically "invade" because most if not all of the troops involved (that Putin is still, ludicrously, pretending weren't there) came from Russian bases already in Crimea. Anyway. The current situation (which I'll write down because looking back it may be hard to remember) is that the Russkies have nicked the Crimea, by a mixture of direct force, intimidation, propaganda and (it has to be said) support on the ground from a fair segment of the population. With indecent haste they've declared Crimea to be part of Russia; no-one else accepts this (I have little doubt that, had they simply waited 6 months for things to settle down, and then held a fair referendum, they'd have won a majority for secession anyway [Update: or, possibly not. See the beeb report quoted here]. And could then, with suitable decorum, have joined Russia in a year or two. However, whose interests would that have served? No-one would have looked macho).

Returning to my prior title, there is some promise. The current lot in the Ukraine seem to be fairly sensible, at least when viewed from a distance; and Ukraine has faded from the headlines for the moment, which is good; indeed, that's the best sign. They've abandoned the silly stuff about not having Russian as a language. They managed not to fire at the Russians in Crimea. The trick now, as the Economist said, is to work towards building their country and avoid tying themselves into knots over the Crimea. In a way that the Georgians have failed to. they will suffer a variety of problems - like the Russkies, oddly enough, no longer selling them cheap gas cheaply - but in the greater scheme of things not subsidising fossil fuels is good anyway. Another reason for hope is that Putin's poll ratings are high. The bozo Russian public is actually viewing this as a success. Which is stupid of them, but at the same time takes the pressure off him to, say, invade eastern Ukraine.

My current title comes from my next "prediction", or perhaps I'd rather say "scenario", which is that this is going to turn into economics, in much the way it happens in one of the stories in Asimov's Foundation series (and one from F, not F+E, I think, but never mind, it makes a better title). The one where they are being invaded by superior military (Korell), and Mallow does nothing but retreat, and after a while the invasion collapses because the invading force is too tied up economically with the products of the Foundation. So in this version Russia is the invading Evil Empire and they're going to find that what they've done so far is quite enough; more would be disastrous. You can see that a bit already; as Timmy says in Russia is finding out something interesting. Or, you can read some slightly wild words here. And I think its now fairly clear that The West would react harder to further incursion into Ukraine; and even harder to incursions into other countries. Russia can survive the current level of capital flight, and raising of interest rates, and loss of finance; but I very much doubt it wants to push any harder. In Asimov's story, part of the invasion collapsing is due to the entourage of the Korellian dictator pulling the plug because they don't get atomic powered refrigerators. In today's story, there must be a lot of oligarchs wondering if they really want to get boxed into an isolated Russia dominated by an ever more dictatorial Putin. If I were one of them, I'd be discretely moving money and children out now. Or at least, constructing an option to do so. And I've have no interest at all in whose flag flew over eastern Ukraine.

In the long term, the decadal scale, in this scenario, Ukraine wins by moving Westwards, figuratively: more open, less corrupt, richer. Russia, under Putin, fails all that. Living in Russia becomes ever less attractive; living in Ukraine, more so. But this is only a scenario: I refuse to be held to it as a prediction. Many things could go wrong.

* The Love Song of J. Alfred Prufrock
* A total of two decent articles on the military situation in the Ukraine says Brian.
* Battle of Kiev by CIP.
* McDonald's quits Crimea as fears of trade clash grow including the interesting "The closures follow Geneva-based Universal Postal Deutsche Post's announcement that it was no longer accepting letters bound for Crimea as delivery to the region was no longer guaranteed."
* The home front: The Kremlin’s belligerence in Ukraine will ultimately weaken Russia
* Better get fracking, eh? from Timmy
* Russian Fiction the Sequel: 10 More False Claims About Ukraine
* Ukrainian Hopes, Russian Failings is good.

Much of this goes to the point that the Crimea was the base for the Russian Black Sea Fleet, and the Ukraine was edging towards the EU/NATO. No way the Russians were going to have their major naval base on NATO allied territory.

As to the economics, well it goes both ways. The price of gas to the Ukraine just got pushed up 80% by the Russians.

You would get a bit more balance in your 'world view' by reading Lubos Motlls take on the Ukraine situation.

Now remember that Lubos is an anticommunist.

The expansion of Nato eastward is an unnecessary threat to world peace.
Senator John McCain would be proud of you.
Nato serial bombing the shit out of Yugoslavia Afghanistan Iraq Libya and perhaps Syria has created new and dangerous problems.
Its all too easy to create havoc then walk away.
A new world war is a real danger unlike so called global warming.

[Lubos was always a total wacko when it came to GW; I see he still is. I'd trust him on GR, but not on politics -W]

I wouldn't bet on Ukraine's westward lean leading them to prosperity, at least not if median income is considered. The usual plan for IMF "help" for peripheral countries, including increasingly the weaker nations in Europe, involves imposing crushing austerity measures and allowing foreign investors to strip out all grabbable assets, leaving the populace poorer than before. By all appearances, that's what the US and Germany have had in mind for Ukraine. Believe me, I hope that's wrong - or that the Ukrainians observe Iceland's good example.

Best offer to swap Gitmo for Sevastapol before the Crimea turns iinto an island,

A crucial but AFAIK unreported issue is whether Russia is mustering out its experienced conscripts as per their one-year legal obligation period ending in April through May, or is it forcing them to stay around.

If the former, then the Russian military readiness is deteriorating every day the further we get in the the month of April, making it less likely that an invasion is planned.

As for Ukraine's economic future, past IMF proposals have been pretty bad, although they seem to have noticed that in recent years. The EU by contrast has been highly generous to less-developed members on non-monetary policy issues. Ukraine doesn't have Russia's fossil fuels, so they know they have to do something different.

The relatively prosperous regions of Ukraine are Kharkiv and Donetsk, heavily Russian areas, and with a lot of trade with Russia. Those areas, far from Kiev, didn't get a say in whether they wanted democracy overthrown, and have zero representation in the new Ukraine government. These are also the regions that will be economically disrupted most severely by the EU/IMF reforms. Those cities are presently in more or less revolt to the authority of the new government in Kiev, with daily violence. Those cities are also where the Ukraine's weapons (like tanks) are made. If they wanted, they can make their own army, without Russian help at all, and take over the whole country (which they probably don't desire: but they would insist upon more autonomy).

The cack-handed Kiev government will eventually collapse without participation from it's eastern regions, and acknowledging their concerns, including maintaining economic and cultural ties to Russia. Russia just has to sit and wait, and a more moderate government will hopefully be brought into power in the new elections.

If we accept the right to self determination for Gibraltar, Falklands ... and there is 'little doubt that, had they simply waited 6 months for things to settle down, and then held a fair referendum, they’d have won a majority for secession anyway' then should a right of secession just be recognised and allow Eastern Ukraine to go same way as Crimea if they want?

[I would support that, yes. But I very much doubt that they'd vote for secession -W]

I suspect that Western Ukraine then finds that without being able to dominate unrepresented Eastern Ukraine, EU reforms mean very painful austerity. Western Ukraine may end up deciding it has made a mistake favouring EU.

(This is just a scenario not a prediction, as I am sure you understand.)

[You really think anyone sane would want to join Russia? You wouldn't want to, I wouldn't. No matter how much austerity was the alternative. They're a bunch of gangsters -W]