Huge jump in use of carbon pricing

Says some PR from the CDP (formerly, as they say, the Carbon Disclosure Project; I hate people who do that). As picked up by, e.g., the FT. The FT does no analysis, so you may as well read the CDP report instead. Here's the executive summary:

The number of corporations disclosing they use an internal price on carbon has tripled since last year. Corporations use internal carbon pricing to offset the costs and risks of greenhouse gas production, and to finance the transition to secure sources of low carbon energy. This dramatic increase demonstrates the ongoing mainstreaming of carbon pricing as a high priority for business and an essential component of the corporate strategy toolkit. 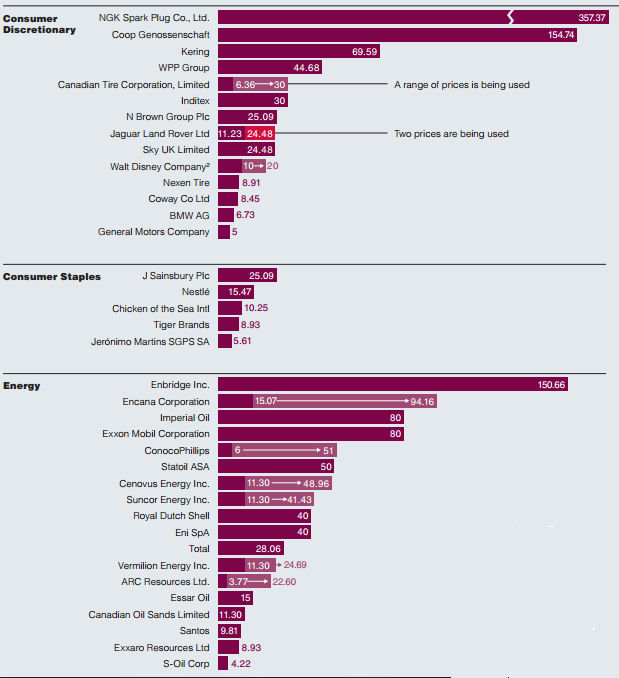 The word "internal" didn't make it into the PR headline, but its important. Companies are trying to guess how much carbon should cost, not an easy thing to do as the Drax indicates (though strictly that was subsidies, not directly costs). Exxon does the same. Companies want to know if they're going to make money; carbon taxes - or a range of inferior alternatives - cost them money, so they need to include that in their planning.

I'm not sure how reliable the numbers are. Exxon for example is shown at a flat $80 (per tonne, one assumes). However Exxon's own words, which they quote, are ...which in some geographies may approach $80 per ton by 2040. Perhaps they use $80 because its the only number they could find. $80 seems to be a Stern-ish number. For comparison, the extremely stupid ETS was at about 6 Euros.

Anyway, the point is that the numbers being used vary wildly; from less-than-5 (which I would call extreme, were it not about what the ETS is at) to the frankly-implausible more-than-350. Some of this surely reflects the importance of carbon emissions in the product: NGK Spark Plug Co. probably survives its mad $350+ because that still represents a smallish cost for each sparkplug. If CDP have noticed this wild disparity, they don't say so in that report. In some other stuff they do notice, but that's all: they say there's a variation from $1 to $357, but make no comment upon it. Which is odd; because it indicates that a lot of the companies using this pricing aren't taking it seriously (errrm, so perhaps not so odd after all). Unless the prices used start to converge this won't be a lot of use to anyone. Perhaps that's part of the use of this report. And it does perhaps help pave the way for a carbon tax.

I don't quite understand what this means. Does this just mean that companies are trying to work out if their product would still be profitable if there was a carbon tax, without there actually being one?

[Sort of; mostly; you can think of it like that. But I think there is more than that; it guides investment decisions. If you're going to make a given widget, you probably have several paths to get there, and trade-offs between energy use vs other stuff. Or think of someone trying to source an object with transport costs; if you have to fly it in at CO2 cost X, that affects whether you buy it from across the world, or locally. But I think its pretty hard to tell from what is being reported if people are using in this way to make operational decisions, or are just using it to explore future policy -W]

Okay, thanks, I hadn't thought of in terms of possible investment decisions.

For something that might be more useful, see Clearing the Air: Ensuring Long Term Value to Shell by Addressing Climate Change and Pricing Carbon, by Angus Gillespie @ Shell Oil. See around 16:57 for numbers used by Shell and other oil companies, but the talk is well worth watching.

[Slides are available from the Shell talk thingy, though they are a touch vague. They say Identifies most CO2 exposed projects and assets .... the “tall poppies” but I'm doubtful that CO2 pricing is really needed for that -W]

Problem is that a Carbon Tax is in the 'necessary but not sufficient' category. For example; you want to drive people from gas fired central heating to electric (assuming zero carbon electricity!), a carbon tax will help, but you still have the problem that it requites significant investment per household converted, and if you don't directly address that then you are into classic 'punishing people for being poor' territory.

Not necessarily a significant investment to convert to electric heating. Last year I stopped using my oil fired central heating and bought a few fan heaters at about £15 each. Scattered around the house with some (optional) time switches they did the job.

#3 That's why I suggested watching the video, not just looking at slides. Not as good as being there an able to ask questions, but better than the slides.

Off topic, sorry, but Wadhams threads I found were closed.

Thought some people might want to catch up with complaint report
https://www.ipso.co.uk/IPSO/rulings/IPSOrulings-detail.html?id=225
"The Committee had listened to a recording of the complainant’s interview with the journalist, provided by the newspaper, in which he made the statements attributed to him in the article. The article had accurately reported his position as he had explained it to the journalist.
...
The complaint was not upheld."

His complaint including "I did not make any of the statements enclosed in quotation marks by the reporter" looks like further silliness now.

For example; you want to drive people from gas fired central heating to electric (assuming zero carbon electricity!), a carbon tax will help, but you still have the problem that it requites significant investment per household converted, and if you don’t directly address that then you are into classic ‘punishing people for being poor’ territory.

Not necessarily. Hansen's 'fee (i.e. tax) and dividend' proposal, for example, is to divide up the revenue from the tax equally among all taxpayers, and send each an annual check for that amount. That means those who burn more fossil fuels than the average, pay those who burn less. If it turns out that poor people burn more than the average, then it's true they'd need help, but I don't know that they do.

It's more that energy bills tend to be proportionately higher for the poor vs the rich. A real cynic would suggest that a dividend scheme would - by overall increasing the incomes of the poor - slightly increase energy use.

But the issue to me is more that if we want to seriously reduce CO2, then a carbon tax must be set at a value which is seen as extreme in the OP - and that's not enough, we also have to make sure that migration pathways to avoid this tax exist.

It’s more that energy bills tend to be proportionately higher for the poor vs the rich.

I'm sure that's true, but of course if everyone gets an equal share of the total revenue from the carbon tax, those who use less FF energy in absolute terms than the average person still make money, that can then be invested in efficiency or in converting to alternatives.

And it's not necessary to make the tax extreme, if what we really want to do is reduce the price advantage FFs currently have over renewables. Solar and wind are already competitive In many sectors, so any increase in FF prices "should" generate market forces leading to more R&D in carbon-neutral sources and storage, ramp-up in capacity, and infrastructure buildout.

DISCLAIMER: I Am Not An Economist, so I could be talking strictly through my hat.