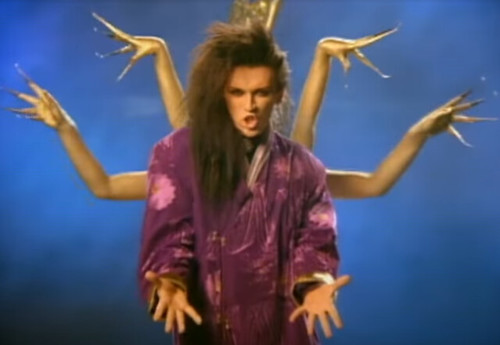 In Myron Ebell, Evil Arch Climate Uber Villain I touched on his wiki entry which is as of now rather better. Naturally, I'd like to claim to have been the impetus for all that but I rather doubt it.

A largeish blob of critical stuff got ripped out but it soon went back. More interestingly, someone tried to supply my "{{cn}}" for "In 2001, Ebell stated his belief that global warming is a hoax perpetrated by the [[European Union]] and the rest of the world to harm America's economy", although in the process they felt obliged to change it to "Ebell has stated his belief that global warming is a hoax". The proposed cite is Trump Relies on Washington Insiders to Build Administration. However the text therein is Trump's pick to oversee the transition for the Environmental Protection Agency is Myron Ebell from the conservative Competitive Enterprise Institute, which has voiced the false view that man-made global warming is a hoax so that's a fail; the quote has to come from ME himself, not the CEI. So it is currently out as "not supported by these sources".

Just so you don't feel too sad, the lede includes In these organizations, Ebell has been central in promoting climate change denial, distributing his views to the media and politicians.

Here's Ebell saying that the Kyoto Protocol was 'predatory economic warfare' waged by the EU on the US:

That's an excerpt from _Climate Wars_, Radio 4, January 2004. The full broadcast might still be available at the Beeb. I think it's Episode 2.

(Much more fun is John Gummer's contribution to that excerpt: 'I don't think it helps to convince people if you are apocalyptic about things but... I have no doubt that we could kill our own planet.')

‘I don’t think it helps to convince people if you are apocalyptic about things but… I have no doubt that we could kill our own planet.’

Just to be certain, the above is an actual ME quote?

Your search - "I don’t think it helps to convince people if you are apocalyptic about things" - did not match any documents. Reset search tools

That this House deplores in the strongest possible terms the unfounded and insulting criticism of Sir David King, the Government's Chief Scientist, by Myron Ebell, an adviser to US President George W. Bush, on climate change; notes that Mr Ebell is Director of Global Warming and International Environment Policy at the Competitive Enterprise Institute in Washington, an organisation funded by, amongst others, Exxon Mobil and the American Petroleum Institute; fervently hopes that Mr Ebell's comments do not represent official US policy; congratulates Sir David King on the work he has done to raise the issue of global warming both at home and abroad; believes that the planet cannot afford another four years of inaction and denial from the US Administration; and calls on the Prime Minister and Foreign Secretary to do everything possible to get President Bush to accept the need to take climate change seriously and ensure the US plays its part internationally in reducing greenhouse gas emissions.

This motion has been signed by a total of 66 MPs.

Here's the 'new team' on energy policy, so far: In what sense do you think ME's position is defensible?
"...Rather than continuing the current path to undermine and block America's fossil fuel producers, the Trump Administration will encourage the production of these resources by opening onshore and offshore leasing on federal lands and waters. We will streamline the permitting process for all energy projects, including the billions of dollars in projects held up by President Obama, and rescind the job-destroying executive actions under his Administration. We will end the war on coal, and rescind the coal mining lease moratorium, the excessive Interior Department stream rule, and conduct a top-down review of all anti-coal regulations issued by the Obama Administration. We will eliminate the highly invasive "Waters of the US" rule, and scrap the $5 trillion dollar Obama-Clinton Climate Action Plan and the Clean Power Plan and prevent these unilateral plans from increasing monthly electric bills by double-digits without any measurable effect on Earth's climate..."

[But that's not the new team, is it? That's from https://www.greatagain.gov/policy/energy-independence.html. That is, it is from Trump. I don't think it is sensible, but I don't see why you want to blame ME for it -W]

----exerpt----
Masha Gessen, writing in NYRDaily, fears the worst: that Trump will be an American Erdoğan or a Putin on the Potomac. (A Russian-American journalist, she is a careful student of Putin’s m.o.) She offers five chilling “rules for survival” in autocratic government:

Believe the autocrat. He means what he says. Whenever you find yourself thinking, or hear others claiming, that he is exaggerating, that is our innate tendency to reach for a rationalization…

Do not be taken in by small signs of normality. …
Institutions will not save you. …
Be outraged. …
Don’t make compromises.

[It all sounds a bit paranoid and a bit pathetic. The US is not Russia. Trump already appears to be moderating much of what he said. "don't make compromises" is what you all hate about the lack of bipartisan politics, when the Repubs do it. Why are you advocating behaviour that you hate in others for yourself? -W]

>> Believe the autocrat. He means what he says.

> Trump already appears to be moderating
> much of what he said.

Hmm. Well, the Cabinet picks will disambiguate this.

Really, this isn't a binary choice and none of the policies to date have done any better than getting us into this handbasket and establishing our present vector. I'm hoping for better ideas. If your kids, after reading the IPCC, ask "but dad, what should we be doing?" ....

Revkin, yes, look down the page a ways, recommends
----excerpt----
Jerry Taylor. Taylor is one of the most interesting voices for me in Washington on climate policy given his path to supporting a carbon tax and other steps after spending years at the free-market-focused Cato Institute challenging the need for substantial steps to blunt human-driven global warming. Taylor, now heading his own organization, the Niskanen Center, still seeks a limited-government approach but has enthusiastically made the conservative case for a carbon tax.
----end excerpt--
No, don't respond to the snippet, that's the little crescent color under the fingernail; look past the finger pointing at the distant moon.
https://1.bp.blogspot.com/-8-b8eiPK2o8/Tl4cVxsxSMI/AAAAAAAABHU/FuB1kHUs…

oh, and when you get into Jerry Taylor's bit, Taylor tells you what he thinks of, yes, Myron Ebell, pointing to an interview he gave:

When the weight of Myron's duty to the republic dawns on him , he will shed his Evil Arch Climate Uber Villain, and transform into an Evil Arch Climate Lyft Villain, until the EPA carpool assigns him a limo. or an elephant to ride.

[I didn't understand that one I'm afraid. Perhaps it is heavily USAnian -W]

Off topic but Monbiot crushes Hayek.

[You mean https://www.theguardian.com/commentisfree/2016/nov/14/neoliberalsim-don… and so on? No, I think not. Unless you mean the sense in which various anti-relativity nutters "crush" Einstein -W]

[Mmm, I see what you mean: all external conditions for the experiment were held carefully constant, so the comparison is clearly valid. Yees -W]

I think one moderating influence will come from the US energy industry itself. People have short memories, but I doubt the US energy people can easily forget the 1980s. Drill baby drill did huge damage. Unemployed oil people, and this included a large number of management and professional staff, drilled themselves right of their jobs and many of their companies died in bankruptcy. And basically the Saudis have reminded them it could happen again... and that their 21st century savior has been rig shutdowns all over the American landscape.

Myron &. Co. are God's gift to Tom Toles, whose cartoons are the best part of Mike Mann's new book, The Madhouse Effect