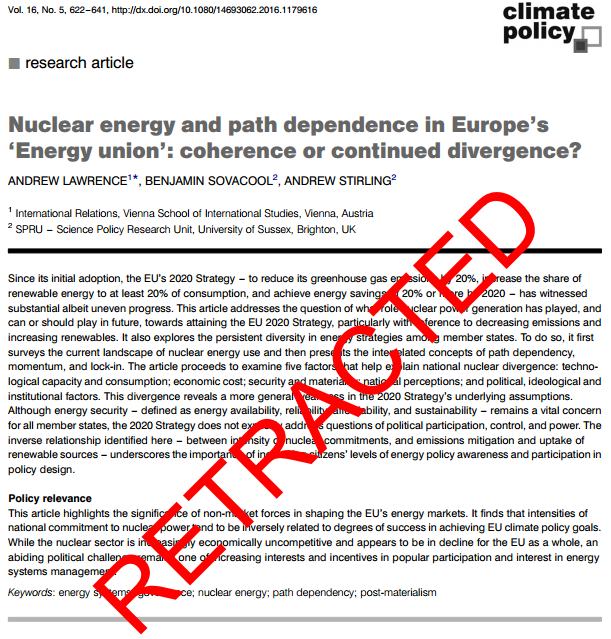 Given the title and conclusions the pro-nuke folk weren't likely to like it, and it looks like they were right not to like it. Two criticisms (linked from the RW article, another I'll skip because it was too shrill) are by Stephen Tindale and Suzanna Hinson and Nicholas Thompson. Those two crits cover the broad range from, effectively, the broad-scale methodology doesn't make sense to the numbers are wrong. The numbers are wrong in many ways: simply mis-transcribed, calculated in the wrong way, and without reference to how the time period chosen affects the results. They also do questionable things with averaging: does it make sense to average an emission reduction, as a percentage, across Italy and Malta when the latter, in terms of absolute emissions, is tiny? I think you would expect at least some discussion of this point in the original paper, but it is absent. There doesn't seem to be any attempt to evaluate statistical significant of the results either1. On a more broad scale, the first criticism questions whether the groupings of the paper make any sense, which seems like a fair comment.

FWIW my own guess would be that the factors influencing renewables and nukes in a country are sufficiently idiosyncratic that this crude level of analysis would be unlikely to be useful.

Hi! We have just launched a blog about activities from our everyday lives in the Arctic. It is great to be able to blog and chat with people around the world even when we live in sparsely populated parts of the world. Our new blog we have chosen to call for Wealth and Work in the Arctic - An Northern Dimension. We have very much benefit from your tips to promote our blog. Thank you and welcome to visit, comment and share our blog too http://ir.alfarab.com/#category30