thescian | December 14, 2010
A remarkable and inspiring presentation of data. Dr Rosling, of course, has been pioneering this for a while now. There is a recent piece in the Economist which I found informative as well. More vidoes linked here.

I want to save my people

thescian | October 28, 2010
That's Narayanan Krishnan, who has dedicated his life to feeding the poor in Madurai. You can vote for him at CNN Heroes 2010. He could use the prize money.

What did Ed Witten do in college

thescian | October 24, 2010
Ed Witten, the physicist whom many consider a man of genius, has had remarkable early years. Below was linked at Hacker News.How long will you need to find your truest, most productive niche? This I cannot predict, for, sadly, access to a podium confers no gift of prophecy. But I can say that however long it takes, it will be time well spent. I am reminded of a friend from the early 1970s, Edward Witten. I liked Ed, but felt sorry for him, too, because, for all his potential, he lacked focus. He had been a history major in college, and a linguistics minor. On graduating, though, he concluded…

thescian | October 3, 2010
Real High Definition as it is called [link]. Allows you to see Leonardo da Vinci's genius at close range. At this range the canvas appears to be quite like human skin--the colors, shadows and cracks on the canvas, extraordinary. Looking at this, I had one of those moments inside my head when the separation between art and life disappears. This is no more an imitation of life.

thescian | September 28, 2010
There much ado about like at Beebs after actress Thompson was, like, very upset by, like, words and such. This comment by a reader named Colin was very clever.Comparing "like" to "um" and "ah" as a filler/thought pause is okay, but there's one major difference. The listener can easily filter out the "um" and "ah" because they have no meaning. But "like" does, so the listener has to process "like" in the sentence's context to determine if it's relevant or not. This hinders comprehension because it has to be done before the full sentence is known. "I smell like a rat" means what? I stink, or I…

thescian | September 13, 2010
Audio at The Guardian. Great fun listening to them talk so freely, especially the last minute when Attenborough shares a good laugh with Dawkins.

My young son asks me

thescian | September 9, 2010
A NY Times article on the remarkable and inspiring response of two women who lost their husbands in the September 11 attacks.The woman, Susan Retik, has pursued perhaps the most unexpected and inspiring American response to the 9/11 attacks. This anniversary of Sept. 11 feels a little ugly to me, with some planning to remember the day with hatred and a Koran-burning -- and that makes her work all the more exhilarating. In the shattering aftermath of Sept. 11, 2001, Ms. Retik bonded with another woman, Patti Quigley, whose husband had also died in the attack. They lived near each other, and…

thescian | August 12, 2010
This is inspiring stuff. From Economist:SANTOSH OSTWAL, husband and father of two, lost his apartment in 2001 after quitting his job in Pune to solve an engineering problem he'd been thinking about for twenty years. Today his solution - a mobile-phone adaptation that triggers irrigation pumps remotely - is saving water in India and helping more than 10,000 farmers avoid several taxing, dangerous long walks a day.

thescian | August 11, 2010
Recently saw Laura Barrett (Canadian Indie musician) playing the Kalimba. Great sound and so compact. Tenori-on. On the other side of Kalimba in simplicity. But, very cool. And, Vuvuzela. :-) 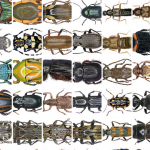 Beetles of the World

thescian | August 4, 2010
A fantastic flickr set with geotags and all.

thescian | August 4, 2010
Lessig's TEDxBoston talk (this is not organized by TED, but by other people in TED spirit, hence TEDx).

thescian | August 3, 2010
If you don't know her, google and learn. Completely agree with her assessment of the near irrelevance of Social Media if you aren't focussing on the important things in life.

The Injustice system in USA

thescian | July 27, 2010
An economist article on the unjust justice system in USA. Here's a case ACLU is defending: Sixteen Years in Prison for Videotaping the Police? A Slashdot comment with some rather painful statistics. Isn't this something that Alexis de Tocqueville saw a long time ago? Tocqueville was a snob, one among the French privileged who was afraid of democracy in France. But he was a very smart and perceptive man and his observations and intuitions about America have been proven right in many ways. The above events are but a few of many. I fervently wish to be proven wrong in thinking that the tyranny…

thescian | July 15, 2010
Hitchens in Slate:A hereditary head of state, as Thomas Paine so crisply phrased it, is as absurd a proposition as a hereditary physician or a hereditary astronomer. To this innate absurdity, Prince Charles manages to bring fatuities that are entirely his own.

thescian | July 7, 2010
A powerful and deeply shocking artistic rendition by Isao Hashimoto. From here. The perverse Danse Macabre of our own times. When we see human folly rendered on a compressed historical canvas, it is all the more clear how precarious our personal survival is. Nidhi, my 3 year old daughter, saw me watching this and asked: What music is that, Dad? What shall I say. This is the nightmare I hope she doesn't have to wake up to.

thescian | July 7, 2010
Prayer, according to Martha, a clever girl, and therefore not a believer. From Julian Barnes novel "England, England": Alfalfa, who farts in Devon, Bellowed be thy name. Thy wigwam come. Thy swill be scum In Bath, which is near the Severn. Give us this day our sandwich spread, And give us our bus-passes, As we give those who bus-pass against us, And lead us not into Penn station, Butter the liver and the weevil. For thine is the wigwam, the flowers and the story, For ever and ever ARE MEN.

thescian | June 30, 2010
Admirable restraint from a 16-year old. The policemen involved in the incident have no clue about their own guidance? A mighty stink must be raised.
Advertisment