It’s been nearly a month since Hurricane Harvey made landfall on August 25 off the Gulf coast of Texas. The Houston Chronicle continues its excellent coverage of the massive “clean-up” efforts in cities across the region. Today’s edition features photos and interviews from Dickinson, TX, a town about 30 miles southeast of Houston. More than 7,000 homes in Dickinson were either destroyed or damaged. Officials are telling “weary residents” it’s going to take some time to get all of the debris removed that they’ve placed outside of their houses, apartments, mobile homes.

Jessica Martinez and Rossana Coto-Batres examine debris on a Houston street. Look beyond them at the mounds in front of every home. (Credit: Nat. Council for Occupational Safety & Health)

I find myself studying the photos taken from neighborhood streets. They show piles of carpeting, mattresses, sheetrock, dressers, and clothing on the sidewalks and on front yards. “Clean-up” is a misnomer.

How and where will all of the debris go? And when?  It's an enormous task for even the biggest cities' solid waste departments.

The City of Houston and other municipalities are giving residents instructions on how to sort their household debris. They're asking it be separated into six categories: vegetative debris; construction and demolition debris; appliances; electronics; household and hazardous waste; and normal household trash.

For Throwback Thursday, I was reminded of an October 2005 story from NPR’s Howard Berkes. It was six weeks after Hurricane Katrina.

Berkes reported that the debris collected to-date following Katrina could have filled the New Orleans Superdome 11 times. Landfills in the region were receiving different types of debris, similar to the sorting system taking place today in the Houston area. 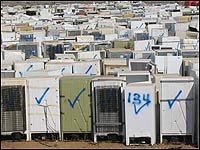 Row after row of refrigerators at a landfill in Jefferson Parish, La. Before the cleanup is over, this dump may hold 250,000 fridges. (Howard Berkes, NPR)

“...there are dumps reserved for potentially toxic material, including refrigerators and freezers. At one Jefferson Parish landfill, 5,500 refrigerators reside, creating an unrelenting stench. Before it's over, a quarter-million are expected.”

I can picture it: truckload after truck load of refrigerators. What I hadn't thought about though was the smell. Most of those refrigerators were crammed with six week old spoiled meat, milk, eggs, and much more.

Berkes interviewed supervisors at a landfill in Jefferson Parish, LA that was receiving the damaged refrigerators. The stench was overwhelming. One guy explained: think about the worse thing you've ever smelled and multiple it by ten.

Another supervisor noted that some of her crew were getting sick from the horrific smell, but they just kept on working. "Nothing phases them," she told Berkes.

From Throwback Thursday to September 21, 2017: Eric Niiler at Wired wrote this week about the estimated 8 million cubic yards of storm debris in Houston. Environmental groups are watching closely to monitor debris disposal in the state. After Katrina, George W. Bush's EPA waived requirements in Louisiana for handing hazardous waste. The Environmental Defense Fund and others don't want that repeated in Texas.

October 25, 2017
Celebrity chef John Besh has joined Harvey Weinstein and Bill O’Reilly in news headlines about sexual harassment in the workplace. The New Orleans-based Besh has received numerous James Beard awards and has appeared on the Bravo TV network’s show Top Chef. His offenses were reported this week by …

Pollution: not “an unavoidable consequence” of development

“A gift to the construction industry”: catchy quotes from Court of Appeals argument on OSHA’s silica standard

October 14, 2017
OSHA took the long road to adopt a standard to address respirable crystalline silica. Although the final rule was issued in March 2016, it is being challenged by both industry and labor groups. The first says OSHA went too far, the other says OSHA didn’t go far enough. The long road, however may be…

October 11, 2017
The U.S. Supreme Court is not interested in hearing former Massey Energy CEO Don Blankenship's claim that he didn't get a fair trial. On October 10, the court denied Blankenship's petition to review his criminal conviction. (here (see page 3)) In December 2015 a jury found Blankenship guilty of…

October 4, 2017
President Trump’s nominee to head the Labor Department’s Mine Safety and Health Administration (MSHA) appeared today before a Senate committee for a confirmation hearing. David Zatezalo answered questions about the epidemic of black lung cases, an increase in mine worker fatalities, the need for…