Further Differentiation within the ER

(from my old blog)

OK this week I've been obsessed with the endoplasmic reticulum (ER). This organelle is comprised of a continuous network of membranous tubes (and sheets) that extends to the cell periphery. In addition ER sheets also envelopes the nucleus - forming a bilayered nuclear envelope with an outer nuclear membrane and inner nuclear membrane.

The extended part of the ER though is mostly tubular, as I displayed in an earlier post on Immunofluorescence images: 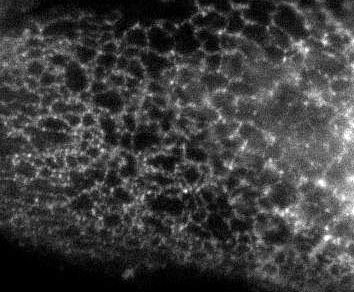 So the question becomes ... how do you form tubular organelles?

Well Gia Voeltz, from our lab just published a paper in Cell on how a class of proteins (Reticulons and DP1-related proteins) are responsible for this architecture. Reminiscent of an earlier post where I described how Nesprins are confined to the outer nuclear membrane (and thus help to differentiate that portion of the ER), reticulons and DP1 define another part of the ER, the reticular or tubular part. So reticulons are excluded from the nuclear membrane. But there's more, Gia used an assay to form tubules in vitro (i.e. in a testube) from ER vesicles derived from frog eggs. She could inhibit the tube formation by modifying reticulons or by adding antibodies against reticulons. In addition the way reticulons are inserted into the membrane is not typical of most membrane proteins, and this strange "topology" may help them to curve membranes and thus help to form tubes.

Here are a black & white images with a color overlay (from Gia's paper), that demonstrate the unique distribution that reticulons adopt. Notice how a general ER marker (Sec61-beta) is in the tubular portion and in the nuclear envelope, but that reticulon4a (also called NogoA) is only found in the tubular ER. Note how the black and white image of Rtn4a (but not the color overlay!) clearly demonstrates how reticulons are excluded from the nuclear envelope.

To read more check out the paper.

Just a quick lab advertisement, my bay mate Yoko and my boss Tom have a review article in Cell about how morphological differences between various regions of the endoplasmic reticulum (ER) are representative of functional differences. You can divide the ER into 3 morphological parts. - The Nuclear…

Non-cell biologists have often viewed the cell as a bag of molecules. Over the years as cell-biology has developed, it became clear that this was a simplistic generalization. Cells are organized by a dynamic cytoskeletal network that can organize the cellular architecture. Cells are also subdivided…

The Future of Cell Biology - Part I - Organellar Shape

OK this is an attempt to revive the blog. This entry is inspired by a talk given about a month ago by my mentor, Tom Rapoport. I hope that it will be the first of a series of posts where I ramble on about what we don't know. In each post I'll discuss a topic that remains mysterious. I'll try to…

My Year in a Picture

December 13, 2009
There's a battle going on out there. A battle for trust. Do you get the H1N1 vaccine? Is global warming true? Will you go to hell? Is the free market the best way to run an economy? How to answer these questions? The conventional wisdom is that all members of our society should get informed. Many…

Slicing a famous brain, streamed live on the web

December 4, 2009
I'm siting at my breakfast table when I read this in the NY Times science section: Dissection Begins on Famous Brain The man who could not remember has left scientists a gift that will provide insights for generations to come: his brain, now being dissected and digitally mapped in exquisite detail…

December 3, 2009
The graph is from Are there too many PhDs? at Mendeley Blog In the U.S., we are constantly hearing about how the country is falling behind in science. We need more scientists to fill all of those jobs we want to create. And the cure to that is to fund more PhD programs! Yet, when you ask graduate…