What Color Was Ailuropoda microta, the Pygmy Giant Panda? 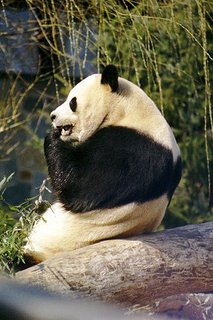 The ancestor of today's giant panda really was a pygmy giant panda, says Russell Ciochon, UI professor of anthropology. Ciochon is a co-author of an article published in the June 18-22 online edition of the journal Proceedings of the National Academy of Sciences (PNAS). Previous discoveries of teeth and other remains made between 1985 and 2002 had failed to establish the animal's size.

Ciochon says that the ancient panda (formally known as Ailuropoda microta, or "pygmy giant panda") was probably about three feet in length, compared to the modern giant panda, which averages in excess of five feet in length. Also, like it's modern counterpart, it lived on bamboo shoots, as indicated by wear patterns recorded on teeth and specialized muscle markings, indicating heavy chewing, on the skull.

The new find, made about 18 months ago in a south China karst (limestone) cave by Chinese researchers and co-authors Changzhu Jin and Jinyi Liu of the Chinese Academy of Sciences, shows that the basic anatomy of the giant panda has remained largely unchanged for millions of years.

"Bears are generally carnivorous or omnivorous, and then you have pandas - they have gone in a completely different direction, they are committed vegetarians," Russell Ciochon, an anthropologist at the University of Iowa, US, and an author on the PNAS paper, said.

"Early on in the evolutionary history of pandas, they must have invaded this bamboo niche and begun to eat bamboo.

"Given the food source they were eating was very prevalent, then they must have become more and more specialized. It probably has been exploiting this kind of environment for many millions of years."

Much like the lineage of the red panda, though the evidence is less sure about that animal's specific diet.

A. microta's coat color is the immediate question that pops in my mind, though there's no real way to substantiate it. Currently there are two subspecies of the giant panda, Ailuropoda melanoleuca melanoleuca, the typic black and white giant panda, and Ailuropoda melanoleuca qinlingensis, a subspecies identified in 2004 that has different cranial and dental proportions and more noticeably, brown patches on its coat instead of black.

Their distinctive coat probably evolved as an adaptation to avoid predation, long ago when they were actually preyed upon by animals other than human beings. Perhaps the white helped blend them with the snow in winter, while the pattern of their coat blurred their outline in the environment confusing their big cat predators, much like the pattern of zebras (though even zebra "camo" is up for debate).

The Chinese have their own bedtime story explanation:

Long ago a family of humble shepherds made its home in the remote hills of China. Each day the shepherds led their animals to graze in the pastures near the bamboo forest. Frequently a little panda would wander from the forest to join the flock. Perhaps the young panda mistook the sheep for its own kind, for in those days pandas were all white. One day, as the panda roamed among the sheep, a huge leopard sprang from the forest. The sheep scattered and ran away, but the little panda was too slow to escape. He surely would have been killed by the leopard if not for the bravery of a young shepherdess. She ran to her friend's aid and began beating the leopard furiously with a stick. The leopard turned from the panda and attacked the girl. Although she fought bravely, the shepherdess was no match for the leopard. News of the shepherdess' brave deed quickly spread through the forest. When the other pandas heard the story, they began to cry and throw ashes upon themselves in mourning. As they wiped their tears away, their dirty paws left dark smudges around their eyes. As they hugged each other, their paws stained their arms and legs. And when the pandas tried to muffle the sound of their sobs by covering their ears, they blackened them as well. Ever since that day, pandas have worn these markings out of respect for the shepherdess who died so that one of their kind might live.

Hugs for China's Pandas Shaken Up by Earthquake

Life in the trees, not bamboo, shaped the panda's "thumb"

They sit there, mostly curled up, mostly asleep, high up in tree-tops, sometimes chewing on bits of plants. But little known is that, deep within their furry little heads, they harbour an unknown desire: to take over the world... Pet peeve # 113 concerns pandas: it's the generally held notion that…

Bamboo is a grass that escaped predation by grazers by turning to giganticism, growing too fast and too tall and too woody for grazers to eat.

Then a small bear invaded the unchecked forests of bamboo and turned to giganticism to exploit this inexhaustible food supply.