A Short History of the Eastern Hemlock II

In Part I we looked at the eastern hemlock's northwestern progression after the last ice age,

and the frequency of the hemlock along a slope-oriented moisture gradient: 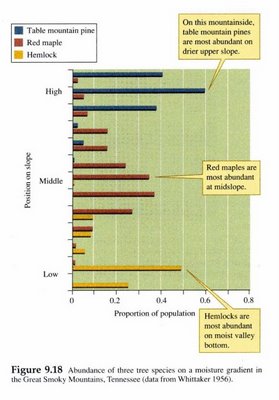 The distribution pictured above is almost exactly the case in the Laurel Hill old growth stand. The hemlocks are dense at the moist valley bottom, surrounding and shading Laurel Hill Creek and At the different levels of the gradient, not only does the abundance of trees differ, but the composition of the ecosystem. There is a "no-man's land" of sorts between each level that ecologists called ecotones.

Ecotones are imaginary lines between ecosystems where the area exhibits characteristics of both ecosystems (such as the moist, dark hemlock stand, and the relatively dry, bright red maple stand). Ecotones are usually hubs of activity in forest communities where you'll find a greater diversity of organisms than within the bordering ecosystems separately.

You can immediately see the difference in distribution here, with the hemlocks downslope (above) and the
deciduous community upslope (below). I found many different types of fungi and moss in this area that were not present in either community.

Like most other evergreen forests, eastern hemlock stands blanket the floor with a thick, spongy layer of needles. The needles of these trees contain a high level of tannin, a highly acidic, highly astringent compound that deters consumption by microbes and herbivores.

Nutrients in the soil are transported from tiny streams on the ridge, funneling down and enriching the valley, finally coalescing into what are called "black runs." These are streams specifically associated with hemlock growth, dark and highly acidic from the tannin content of decaying needles.

With such a high concentration of nutrients in the valley, the relatively closed canopy of the hemlock stand and the acidity of the black runs, it is no wonder that hemlock communities support a wide array of ferns, mosses, lichens, fungi and other shade reliant, nutrient absorbing organisms.

Old growth stands of any tree are able to support a vastly more diversified ecosystem than new stands, not only within itself, but also along its borders. More stands need to be protected and set aside for study and educational purposes so we can look back into a world that existed long before civilization took its grip on the planet.

A Short History of the Eastern Hemlock I

About 16,000 years ago, glaciation from the last ice age finally began to retreat after millennia of occupation. As the glaciers melted and filled scrapes in the landscape with fresh water, the animals and plants followed, once only able to live in the temperate climes of southern North America.…

Walking through a streamside copse of eastern hemlock in the ancient Appalachians is revealing for several reasons. First, the sheer size and age of these virgin stands can be humbling - at 45+ meters high, one tree may have been alive for more than 600 years. Second, a closer look at the forest's…

Organisms In Time and Space: Ecology

How do you track the relative contributions of a plant species in an ecosystem? When you are talking about thousands of square miles of land area this can be an incredibly daunting task, but it is very important because it provides important information related to invasive species that may be…

Interesting. I am in the upper peninsula of Michigan, and I hadn't realized that hemlock had gotten to this area so recently after the last ice age. In general, it sounds like this area never did reach a steady-state condition between the melting of the ice and the arrival of the lumberjacks in the 1800s.