I have a small part in a show called SACRED WASTE which was created by LSU Ph.D. student Bonny McDonald – which is playing in the upcoming New Orleans Fringe Fest.  The show involves dance, poetry, ritual, elaborate costumes (made of 100% recycled plastic), and explores many aspects of the relationship between humans and plastic – including the manufacture of it here in Louisiana, and some introductory polymer chemistry!  SACRED WASTE was one of 30 shows jury selected to play in the New Orleans Fringe Festival (out of > 200 entries). 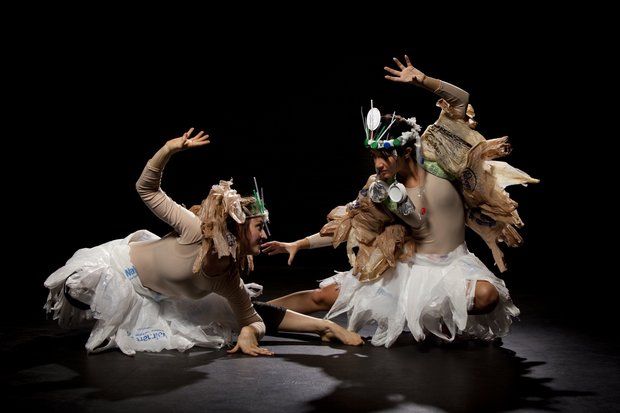 This performance art show is a unique blend of art and science – it conveys some of its information in some unusual and compelling ways: the costumes, the set, and all the props are made of discarded plastic – each costume is made of 100-300 plastic bags, one costume is made of about 300 plastic bottle caps, there's a dragon made of about 3000 bags, and a tree made of plastic – yet we're reminded that all the plastic on stage during the show only represents the amount of plastic Americans discard about every 100 milliseconds. One scene in the show personifies the Great Pacific Garbage Patch in a whirling dance…one scene involves a shaman ecstatically scrawling the structures of polyethylene, polypropylene, and polystyrene on a plastic screen…one scene depicts the flow of plastic through a bird's body. Each scene in the show explores a different aspect of our relationship with plastic and mixes science with mysticism, animal instincts with consumerism, creation myths with post-apocalyptic evolution and the "new nature". If we taught more science this way (just a little more of it, certainly not all of it) – we might change a lot of people's attitude toward science, in the way that this whole show hopefully also changes its audience's attitudes toward plastic.

The New Orleans Fringe Fest has nearly 80 total shows (30 juried plus 47 "Bring Your Own Venue" shows) and it likes to feature very oddball stuff (one of its own tag lines is "wild, weird, fresh original theater of all types"). Since almost the whole cast is from Baton Rouge, we (like many of the fringe shows) are shelling out a lot of our own money to finance staying in New Orleans for the duration of the festival and mounting the show (fringe fest shows around the world are all a labor of love – even after ticket sales, a fringe show typically costs the performers lots of money – even the famous Edinburgh Fringe Fest strongly reminds participants of this in their guidelines). To try to cover some of our expenses we've started a Kickstarter campaign – so if you are so inclined, please visit our SACRED WASTE Kickstarter page (only active for the next 3 weeks) and help us ease the financial burden of taking the show to the Fringe Festival.

Tags
NatureLand: What They Used to Call the Environment
The Art/Science (Non?)Divide Building

April 14, 2016
One of the cowboy science teams (or cowgirl science team – see photo) that I was able to spend some time with at McMurdo Station is the Weddell Seal Research Team under the direction of Dr. Jenn Burns of the University of Alaska. This multi-faceted science team spends virtually every single day…

Ridley Scott Just Needs a Little Focus: A Review of the Martian

March 31, 2016
The Martian is a feel-good, science positive, uplifting film about the power of the human spirit, botany, and engineering. It looked, from the credits, like it had at least 8 scientific advisors from NASA (and possibly other places). Too bad that Ridley Scott only half listened to them. As one of…

In Praise of Robert De Niro

March 28, 2016
I just wanted to say how amazingly brave and admirable I believe Robert De Niro's recent decisions have been regarding the screening of the anti-vaccination film "Vaxxed" at his Tribeca Film Festival. As this was apparently one of his first revelations of having an autistic child, his actions are…

March 8, 2016
Hi. Apologies for the radio gap. It turns out that Trish, the co-PI and irresistible force behind this project met with an immovable ice patch and broke her femur a few days ago at the Willy Field airport on the Ross Ice Shelf. She’s “fine” now, and freshly bionic-ized with new hardware pinning…

Antarctica: Links and Lack of Links

February 11, 2016
Internet Links and Social Links at McMurdo Station, Antarctica. Here are some links of interest related to Trish Suchy and my NSF Antarctic Artists and Writers Project: Trish Suchy’s blog about our Artist’s and Writer’s project. David Ainley’s website about his research on Adelie penguins: Penguin…