The Presidential Race Tightens Even As Many Assume It Is Over

A Trump-Kaine presidency is now on the table.

It ain't over 'till the lady in the pantsuits wins. Or looses.

Imagine Debbie Downer and Chicken Little have an offspring. It would be me. Or at least, that's how I've felt over the last few weeks as the only person in the Free World who seems to have noticed that the gap between Trump and Clinton is closing, and in fact, was never really that large to begin with. It only appeared large because a fluctuation occurred at about the same time everyone was hoping for a fluctuation, so it became more real than it should have been. The race has been close for some time, remains close, and is narrowing.

This morning, the newscaster for NPR introduced a story on the race with "With Hillary Clinton's lead narrowing ..." or words to that effect. The story was about President Obama's remarks. You think you're wining, then you miss a couple of free flows, get a penalty or two you weren't expecting, next thing you know, you wake up the next morning, and you're the Minnesota Vikings. Or words to that effect.

Let's look at some tracking polls. Tracking polls may be inaccurate with respect to magnitude (how high or low the candidates are, in relation to each other, but scaled in absolute terms) but they are supposed to be helpful in detecting short term changes. So, for example, if you have good reason to think two candidates are at, say, 60 - 40 in the split among voters, and a tracking poll then tells you that that first candidate has likely lost about 5%, that means that you should take seriously the possibly that it is no longer 60 - 40, but may have moved closer to 50 - 50, without assuming how much closer. That is what tracking polls can give you.

The Los Angeles Times has a well respected tracking poll. This is a picture of it: 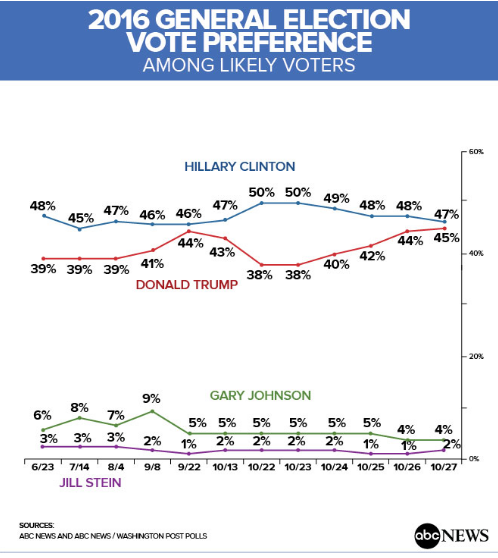 This shows the race narrowing to a near dead heat.

In both of these polls, ignore the absolute value. What these tracking polls are telling you is this: Ten days ago, you were jumping up and down happy because Clinton was so far ahead and her lead was expanding. Today, you need to stop jumping up and down and you have to put your nose the grindstone and work on making sure she wins, because, simply put, Trump has a chance.

A third tracking poll, the IBD/TIPP poll, is considered to be highly accurate (has never been wrong in a presidential race) and has put Clinton and Trump in a near dead head for a long time now. IBD/TIPP shows Clinton's lead expanding a bit.

So, with two tracking polls showing what looks like an emerging reversal of fortune for the Clinton campaign, and one maintaining as an indicator that things are close, those who wish to not have a Trump Presidency should be concerned about two things.

The first thing to be concerned about is your own personal connection to and understanding of reality. A lot of Americans really like Trump, and you didn't think that was possible and still don't understand why. Fail to grasp that at your peril.

The second thing, of course, is an actual Trump presidency.

This is the point where most un-realists, those who simply wish Clinton to win so hard that their eyes have become scaled over, make this argument: "But the Electoral College, bla bla bla."

So, let's look at the Electoral College. I recently projected a very close race in the Electoral College, that some said was a crazy outlier. But when I looked at the other projections, I found that mine was similar to many others, with only one difference: I projected win/loss for all states, while the others left a lot of states as unknown. In other words, for states where we know the likely outcome, the race is close.

Here is a list of the selected sampling of pundit forecasts listed at 270 to to win. 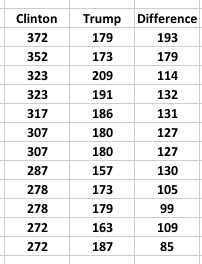 This represents the range of what people are thinking.

Note that in all cases, a) Clinton has more than 270 electoral votes, BUT, in several cases she is within one state of losing that. Note also that Trump is in every case below 270. But, also notice that in all cases (not shown in this table, but visible on direct inspection) there are plenty of unattributed states for either candidate to draw from.

This is the map that is of most concern:

This is the map 270 provides to represent "contested states." It is not unreasonable. New Hampshiere, North Carolina, Ohio, Georgia, Florida, Arizona, Nevada, Utah, Wisconsin, and Iowa are reasonably thought of as contested. In this scenario, neither candidate has enough to win.

Let's take this map and give Trump the states he is very likely to win if the wind is blowing softly in his direction. We get this:

I personally have a hard time believing Wisconsin will not be blue. New Hampshire has been trending more and more Blue, so maybe it will be Blue as well. Le'ts assume that Maine goes blue as well. If that all happens, Clinton wins by 3 electoral votes.

But it is also not unreasonable to guess that New Hampshire goes for Trump, or that, say New Mexico ends up going for Trump. In that case, Clinton is just below the 270 mark. If Trump then wins North Carlina and Florida, then hello President Trump.

Indeed, in the Election Year From Hell, we may very well expect this nightmare scenario:

We can only hope that they do, and then, as soon as possible, re-invade North America!

Time to take the Republicans down. Hard. You may not get another chance to do it.

Ms Clinton and the DNC insisted they did not need the votes of liberals and progressives; that attitude might end up electing Trump.

No argument from me on that point, D.

Colin Powell's hacked e-mails laid out (allegedly) the lay of the land in restrained terms: that Trump is a national disgrace, and that Clinton gets tripped up by her own hubris.

As it stands, I'd rather see a Clinton presidency forced to compromise with a wall of Progressives than a wall of Republicans and a shift of the Overton window toward a more sensible position.

Of course the situation is unlikely to be that unambiguous. I expect that politically it will be pretty ugly, probably for the rest of my days.

I think I understand all of your theory except the Kaine part.

Are you assuming the Senate goes to the democrats?

What if they vote for Pence before Jan. 3rd (when the newly elected take their seats).

If you are not assuming the Senate goes to the democrats, why Kaine and not Pence?

The tone of this blog is changing in a somewhat panicky way. Keep your heads cool. What did I ask a few days ago on this same blog according to a rumor I picked up? I rephrase my question: might there be any chance that the army (and I add now: or another party), will intervene in the election process? I gave you some advice how to organize fair elections in these days. You thought this very unlikely by stating (paraphrase) 'we are in the USA not in a banana state' and or ‘we have taken care for that, we are a civilized state with a firmly rooted democracy’. Now a few days later I ask you with other words: will there be a new elected President sworn in in 2017 ? A nightmare scenario might unfold itself if you are not vigilant in these conditions. I ask you: Who is responsible for the war on e-mails? In the wording of Amnesty International: Words are deeds, they can kill. In this case e-mails and the opening of the lit of the bottle holding those e-mails. First we had the Trump-tape, now we have a revival of Clintons e-mailia. Not coincidental. I have to think of another saying of Amnesty International from Dutch poet Jana Beranová : If nobody listens to no one, death may fall instead of words'. From: a poster of Amnesty International, 1975. Also printed in Geen hemel zo hoog, (No sky so high), Bussum Agathon 1983. This enlightening thought might be very appropriate in a time like this. Is this overdramatic? I hope so, but we will see. Wish your selves and the world luck. We all can use it. Light a candle. Laren NH, Sunday 30 October 2016, 1.24 AM Dutch Summer time, nearly Wintertime.

I still think Hillary will win.

I don't think there will be any intervention by the army or a third part.

Power will be turned over peacefully - as usual.

You maybe picking up on some sub-currents that have been there all along: anger and frustration--not panic. You shouldn't misinterpret this. It is bad, but 'bad' relative to what we here expect, which is to say that some of us expect better of ourselves and don't like how things are trending.

The situation in the Republican party is chaotic. That may be potentially dangerous in some respects, but it's nowhere near like, say, when Sadat was assassinated on the parade grounds.

Nor is it even like the business of the National Guard at Little Rock. I suspect that any trouble we see at this point is more likely to resemble the Bundys in Oregon or lone butheads doing stupid shit.

However that's not to say that an isolated bunch of hooligans (you know, American sports fans) breaking shop windows and overturning cars couldn't prompt action from riot police, who these days are over militarized as a matter of course.

I also would point out that you would naturally expect things to heat up near the end of a close, contentious election, and add that there is an element of strategy in this to GOTV.

Gerrit, the election is fair and clean. In the voting booth.

Before that, not necessarily.