As part of our project we just flew to Cape Royds on a helicopter to take photographs of Dr. David Ainley among the penguins he’s studied for many years. It is about a 10 minute helicopter ride from McMurdo. We arrived in strong winds (maybe 30 mph? – enough to stop you from walking and have to brace yourself from being blown backward during gusts). The helicopter dropped us off and left, and after a short walk we arrived at Shackleton’s Hut (the nicest of the main huts on Ross Island). It’s beautiful and warm inside the hut. Despite the wind it feels comfortable and cozy inside, with lots of room and a high ceiling (with socks hanging on wires overhead – hundred year old socks – picture below).

About 100 yards beyond the hut is an Adelie penguin colony. David Ainley has been working with the penguins for decades and he was our host for this site. His group was collecting data on penguin chick development. The fuzzy gray chicks were almost the same size as the adults at this point, and David and his group spent about an hour capturing “random” chicks and weighing and measuring them. His unique method of picking a “random” chick goes like this: he mentally selects a chick somewhere on the cape, then asks someone nearby for a direction and a number, such as “right 3”. Then he collects the chick that is 3 chicks to the right of the one he had mentally selected. Nice method for keeping himself from introducing some sort of unconscious selection bias.

Here’s a nice shot of a group of penguins close up, and a group with a nice landscape behind.  (Sorry if the resolution is not optimal, downloading and uploading from here is slow with large files so these are reduced). 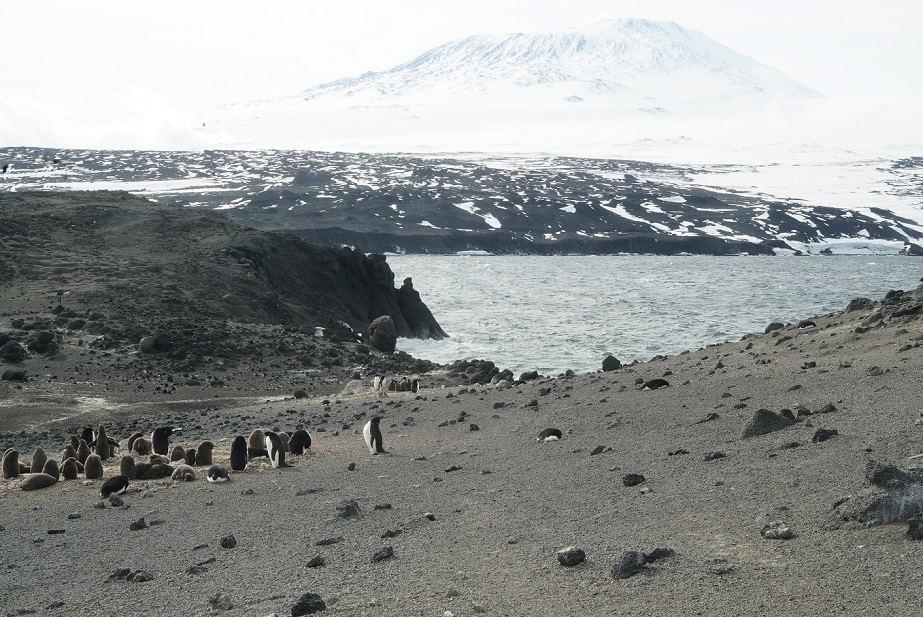 While we were there, there was a lot of activity in the colony: arguments between chicks and adults (a particularly pushy chick chased an adult about 20 yards), two skua’s attacked and ate a chick, lots pebble collection trips occurred (the penguins roam around collecting small rocks (about half the diameter of a pingpong ball) and gathering them into a circular nest one layer of rocks thick. The feeling of isolation was extraordinary. The temperature was quite nice, but the wind made making our slow motion videos difficult. We videotaped Dr. Ainley among the penguins in several different poses similar to photographs of Herbert Ponting among the penguins from this very same colony 100 years ago. We even identified particular boulders in Ponting’s turn of the century photos and Dr. Ainley posed with the penguins near the same boulders. It’s quite bizarre to realize that this same site has hosted this Adelie colony for over a hundred years, and that we were walking over a landscape that had barely changed in that time. The penguins are not afraid of us. They barely care while Ainley walks among them – they get a little perturbed and move out of the way, but that’s about it. They seem like a happy but fragile lot. To watch them, it feels like if they weren’t here in this barely accessible place, that they would have been wiped out decades ago by human intervention. They are curious and like to wander up behind you or beside you while you are working, but when you then turn and look at them they sort of shrug and move along. There is a small lake between the colony and the Shackleton Hut named “Pony Lake”. Ainley says this lake is so filled with penguin guano that it has a high urea content and can be used as a solvent that will clean just about anything. (Maybe it would also denature proteins). Without a special permit, however, you cannot take a sample from the lake (we had to have a permit just to go to this site and walk around).

This was the first of the “out of town” filming sites for our project.

And here’s two goofy people (Trish and I) blocking the nice landscape to pose with the penguins.  The penguins don't seem to mind.

April 14, 2016
One of the cowboy science teams (or cowgirl science team – see photo) that I was able to spend some time with at McMurdo Station is the Weddell Seal Research Team under the direction of Dr. Jenn Burns of the University of Alaska. This multi-faceted science team spends virtually every single day…

Ridley Scott Just Needs a Little Focus: A Review of the Martian

March 31, 2016
The Martian is a feel-good, science positive, uplifting film about the power of the human spirit, botany, and engineering. It looked, from the credits, like it had at least 8 scientific advisors from NASA (and possibly other places). Too bad that Ridley Scott only half listened to them. As one of…

In Praise of Robert De Niro

March 28, 2016
I just wanted to say how amazingly brave and admirable I believe Robert De Niro's recent decisions have been regarding the screening of the anti-vaccination film "Vaxxed" at his Tribeca Film Festival. As this was apparently one of his first revelations of having an autistic child, his actions are…

March 8, 2016
Hi. Apologies for the radio gap. It turns out that Trish, the co-PI and irresistible force behind this project met with an immovable ice patch and broke her femur a few days ago at the Willy Field airport on the Ross Ice Shelf. She’s “fine” now, and freshly bionic-ized with new hardware pinning…

Antarctica: Links and Lack of Links

February 11, 2016
Internet Links and Social Links at McMurdo Station, Antarctica. Here are some links of interest related to Trish Suchy and my NSF Antarctic Artists and Writers Project: Trish Suchy’s blog about our Artist’s and Writer’s project. David Ainley’s website about his research on Adelie penguins: Penguin…