Spent the day digging with my friends Mattias Pettersson and Roger Wikell like so many times before. I like to join them on their sites for a day every now and then (2007, 2008, 2010). The two are mainly known as Mesolithic scholars, but I have been with them on a Neolithic and a Bronze Age site as well on previous occasions. And this time they're straight up my own alley of research: they're digging the largest of the Viking Period burial mounds in Tyresta hamlet's southern cemetery. Measuring eleven meters in diameter and about one-and-a-half in height, it's a pretty imposing structure placed on the apex of the cemetery hill within view of the hamlet. 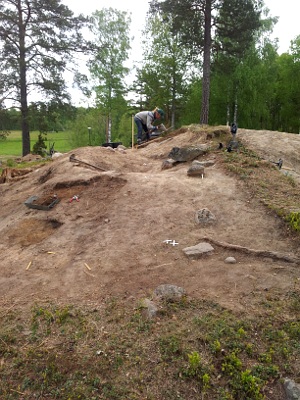 The Tyresta Foundation funds the excavation because they want to enhance the cultural attraction of this well-preserved rural milieu on the edge of a forest preserve. And the County Archaeologist gave them permission because the mound has been badly damaged by a potato cellar dug into it centuries ago. Using my new metal detector I soon found that the entire mound is strewn thickly with nails or similar small iron objects. Some may be from the disturbed eleven centuries old cremation layer at its heart, but most are probably from the superstructure of the cellar and later trash accumulation. 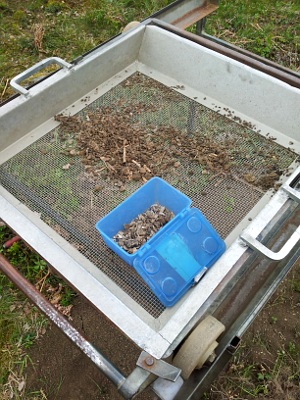 When the guys de-turfed the mound they found the remains of a long-abandoned badger set on the side opposite to the cellar. The badgers' spoil dump forms a wide fan of charcoal-darkened earth down the slope of the mound. And after I gave up on the metal detecting I spent the afternoon digging and sieving this fan. We found a lot of cremated human bones, a clench nail, a tiny bit of pottery and (as spotted by osteologist Sara Gummesson) a fragment of an antler comb. This is clearly stuff that the badgers have excavated from the mound's core and deposited outside their set. In order to date the burial all one would have to do were to send one of the bone frags to a radiocarbon lab. But the Foundation wants something to exhibit on site, and they want the mound reconstructed. So on the dig goes. I hope for some fun surprises in what remains of the burial. But it's most likely a male one as no beads or molten copper alloy from jewellery have shown up yet. Male cremation burials of this period are rarely rich in the area. 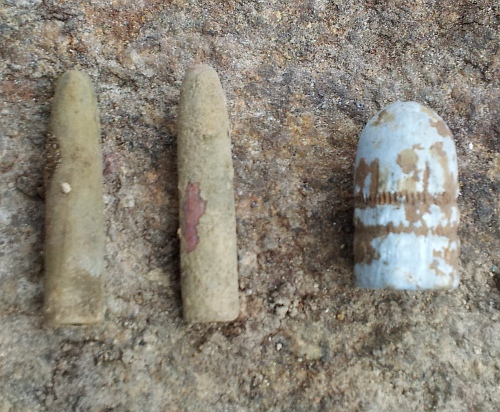 Apart from nails, my only detector finds were two bullets from a hunting rifle, one in the turf strip left on the section baulk across the mound under excavation, another in the spoil dump of an active badger set in a nearby smaller mound. Funnily they don't show the damage you'd expect if they'd been fired into the ground, and I found no cartridges. The larger third bullet that the guys found looks like somebody with a Dirty Harry fantasy has been target practising here. Maybe a member of the Home Guard who used to meet nearby. Can somebody identify the ammo?

Update next evening: Comments Dear Reader Franz J, "The smaller bullets are both full-jacketed military rather than hunting projectiles. These long blunt bullets date 1890s to perhaps 1930s – later bullets were shorter and sharp-pointed. They could have been fired when new or 50 years later. ... 6.5mm was the Swedish military caliber from 1890′s to 1960s. The fatter bullet appears unjacketed (solid lead alloy) and may be 12.17mm caliber from the Remington rifles the Swedish Army used 1867-1890s, but military ammo differed little from hunting ammo for black powder rifles."

I am no authority, but could the wide bullet be from a .44 or .45 hand weapon?
The 7mm bullets might be from an old Mauser m1898 (6.5mm with a layer of dirt) but the tips seems too blunt. A hunting rifle?
I suppose there is no hope of finding teeth with preserved DNA for later sequencing (once the process has become affordable).

My guess is that the preservation conditions are such that any preserved teeth will be calcinated. Don't know if one day it will become possible to extract useful DNA snippets from calcinated teeth.

A shy dude on Twitter suggested that the fat blunt bullet might be a 19th century Crimean war type for a Minié rifle.

Nice post and interesting bullets. I don't think it is a Minié, though. Partly because it is is not as conical as the Minié, partly because the Minié has three very pronounced rings/grooves (therefore often called a "three ringer"). Unfortunately, I don't have any other suggestions for you.

The smaller bullets are both full-jacketed military rather than hunting projectiles. These long blunt bullets date 1890s to perhaps 1930s - later bullets were shorter and sharp-pointed. They could have been fired when new or 50 years later. The two seem slightly different in diameter - measure them. 6.5mm was the Swedish military caliber from 1890's to 1960s. The fatter bullet appears unjacketed (solid lead alloy) and may be 12.17mm caliber from the Remington rifles the Swedish Army used 1867-1890s, but military ammo differed little from hunting ammo for black powder rifles..

Thanks Franz! The verdigris on the jacketed bullets does show them to be rather old. All three maybe over a century, you say! That's well into the date range of everyday US archaeology.

The two bullets on the left are typical early 6.5x55 roundnose military bullets, Sweden didn't change to the spitzer design until 1941. The right bullet should be a 12.17 RF round, check the weight if it's around 24 g (370 gr).

Mu, Franz, I assume the Remington rifle and round was based on the recent experiences of the American civil war (but still before metal cartridges and bolt-action rifles).

With a rifled bore and an expanding "flange" at the base of the bullet like on the original Minié it would have combined much improved accuracy and fast loading, the qualities that made the civil war such a slaughterhouse.
Amazingly, the lessons learned did not result in tactics being much updated before 1914.
The big slug would have lost energy quickly, but still been deadly at ranges enabling defenders to reload several times, which is why artillery is soo much better than bayonets.
--- --- --- ---
Yeah, those mutant popatoes are awful vandals!

The god Tpyos, Lord of Bad Spelling has struck again.

The Remington was a breech-loading design utilizing a fixed rimfire round whose bullet was indeed hollow-based like a Minié ball. See http://en.wikipedia.org/wiki/12.17%C3%9742mm_RF for further info. (Contains a special character, so copy and paste the URL.) In the US many archaeological sites are polluted with bullets, spent cases, glass fragments, and perforated cans, so some knowledge of weaponry (and beer brands) helps date disturbances.