A Mead-hall of the Eastern Geats Has Finally Been Found

My book Mead-halls of the Eastern Geats appeared last September. On p. 9 I wrote:

Splendid single finds, though never surveyed comprehensively, offer a rough idea of where elite settlements might be sought. But little is known about individual elite settlements in 1st millennium Östergötland. Not one of the Beowulfian mead-halls of this book’s title, being my shorthand for the ostentatious manorial buildings where the Late Iron Age elite lived their lives and played their roles, has been identified in the field. Yet they are easily recognised elsewhere through their architecture and associated find categories, and so common that it is by now difficult to argue that you have found an elite settlement of the period unless you can point confidently to its hall building.

And now, ten months after the book appeared, Östergötland's first mead-hall has been found! The foundation postholes of an ostentatious 40 by 6-7 metre building dating from the 6th century, with a smashed Snartemo glass beaker. I sure hope the team metal-detected before they stripped the site, because all the indicative elite metalwork on these sites is in the plough soil.

The site is Ströja in Kvillinge parish near Norrköping. The name hints in a roundabout way that it might be a good place to look for Vendel Period aristocrats. This has to do with guldgubbar, the minuscule gold foil figures of gods and heroes that are found at the period's elite manors. One of the closest find spots for gold foil figures as measured from Kvillinge is the Brahe church on the island of Visingsö in lake Vättern. And that church hamlet was once also named Ströja! (I don't know the name's etymology.)

So how have the predictions I made from the material known to me fared? Well, on p. 79 I point out six parishes out of c. 155 in the province as having good indicators for a Vendel Period elite presence. Kvillinge is not one of the six. But neighbouring Östra Eneby is...

I'm pleased to learn that the excavation is headed by Björn Hjulström who did his PhD at the science-friendly white-coated Archaeological Research Lab in Stockholm, and that the unit is Arkeologikonsult where I have worked and been very well treated in the past. Congratulations! And get those metal detectors out, sharpish!

Norrköpings Tidningar has a video interview with Björn. 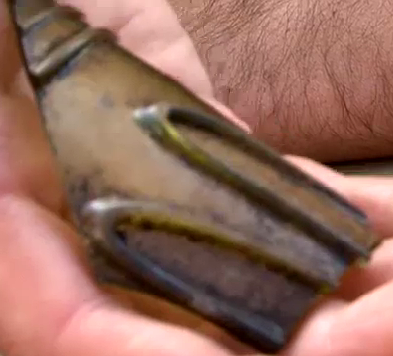 King Björn Invited Me To His Mead-Hall

Yesterday Jrette, her buddy and I went down to Ströja in Kvillinge outside Norrköping and had a look at the mead-hall excavation I've blogged about. Arkeologikonsult's Björn Hjulström very kindly showed us around. The site will become an Östergötland classic, not only for the 6th century manor hall…

Me and My New Book

I'm finishing writing a book and you guys will have the opportunity to review the manuscript some time towards late summer. The working title is Mead-halls of the Eastern Geats. Elite Settlements and Political Geography AD 375-1000 in ÃstergÃ¶tland, Sweden. The title alludes to the Old English epic…

This entry was first published over the cell-phone network on my old site, without pix, on Monday 9 April. This morning I woke up in an unexpected and not very welcome winter wonderland. Driving the 2.5 hours to Linköping on summer tyres was scary. But the snow was gone by lunch. An icy wind…

Excellent find! As you, I also dearly hope they are metal detecting continuously.

I bet that metal-detectors have not been used on the top-soil but will be terribly pleased if I am wrong.

The detectorists from Gothenburg have invested heavily in new equipment with extremely good results in Finnestorp and elsewhere.

Sadly, Björn tells me, they haven't metal-detected the ploughsoil because the area was large and the evaluation fieldwork turned up no evidence of this phase on the site. It seems the person supervising the stripping of the hall foundation didn't understand that they needed to quit stripping and start metal detecting at the moment when they realised what kind of house they were uncovering.

That name part- inge is quite frequent here in Scania(Vellinge, Fjälkinge). From what I have read it is used for sites close to water on a road t water.

This is very good tidings! Except maybe that the site had not been metal detcted prior to the removal of top soil. Poor methodology. Very, very poor...