King Björn Invited Me To His Mead-Hall

Yesterday Jrette, her buddy and I went down to Ströja in Kvillinge outside Norrköping and had a look at the mead-hall excavation I've blogged about. Arkeologikonsult's Björn Hjulström very kindly showed us around. The site will become an Östergötland classic, not only for the 6th century manor hall but also because of its long habitation continuity and for the keen appreciation its excavators have for stratigraphy. I saw hachured plans that would make British urban archaeologists proud.

The excavation is caused by and funded through a planned road widening and railroad improvement which are both hitting Ströja bytomt square on. The word means "hamlet plot" and refers to sites with known rural habitation on pre-1900 maps. The last buildings at Ströja were torn down in c. 1920. There are farmsteads on the plot on a 17th century map, and property boundaries there sketch a typical rectangular hamlet plot of the 13th century's laga läge type. Last year's work on site extended that continuity back to the 7th century within the boundaries of the hamlet plot, which is a beautiful case study for scholars who want to understand how this High Medieval re-organisation of rural hamlets was done.

An important reason that Björn and his team can excavate this site is that it is no longer inhabited. Looking at the map of the area in the Sites & Monuments register you'll find lots of abandoned hamlet plots, which is a sure sign of a 17th century säteri manor somewhere in the vicinity. Such manors are excellent preservatives for Medieval hamlet sites, since their establishment entailed removal and loss of independence for smaller landowners around the manor. In this case, the manor is named Krusenhof and was established in 1623.

There are two funny side notes to be made about the manor. One is that the guy who owns it now also farms Hjortsberga manor in Vårdinge and kindly gave me permission to investigate a Bronze Age deposition site there last year. The other, more childishly, is that the hamlet that became Krusenhof is known as Kullerstad, Knyllestad and Knullerstad in the pre-manorial written sources. In England, that would be “Fuckerstead” – tee-hee.

The entire stripped area on site is full of complicated stratigraphy and well-preserved bones. There are loads of wells, a sunken-floor building and a great big burnt-stone layer whose purpose the diggers hint darkly at. Are all those bones really from meals?** 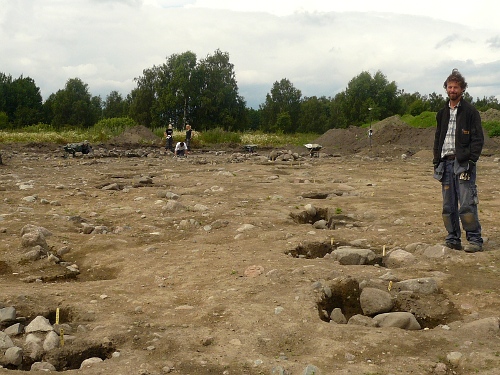 King Björn would like to invite you all for drinks. In this photo he is standing in the side aisle between the row of roof-bearing posts and the building's outer wall. This is where we would expect built-in benches for sitting and sleeping.

Well, what about the mead-hall? It's just outside the boundary of the High Medieval hamlet plot, and currently the earliest known structure on site. The building has seen some post replacement and one whole-sale demolition and rebuilding on the same floor plan with about ten pairs of roof posts. The Snartemo glass beaker's sherds are popping up from one of the gable postholes. And overall, the postholes are oddly shallow for their width. At similar sites elsewhere, you can hide an archaeologist in each roof posthole without even dismembering him. But not here. And it isn't because the postholes have been truncated by later ploughing: a rare and beautiful drystone beam support wall along one end of the building survives to above the level of the postholes' top packing stones. This suggests that the hall was not very high and bore a light-weight thatched roof.

Sadly, the modern ploughsoil has been stripped from the whole site without the benefit of metal detecting. The team is however metal-detecting the stripped surface intensively. As you can see from the photos, the trench edge is just a few meters from the mead-hall, so I suggested to Björn that he put some skilled person-hours into metal-detecting the plough soil just outside that trench edge to perhaps pick up some good stuff from the great hall.

A note on dates: Björn (who understands scientific sampling way better than most Swedish archaeologists thanks to his lab background) * The Snartemo beaker, being the single datable find so far from the hall, is Late Migration Period (D2), c. AD 450-540. It would be odd to find a hamlet plot being established during that interval as the big rift in Iron Age settlement continuity marks the end of that period (cf. the AD 536 atmospheric dust event). So maybe the beaker was an heirloom brought to the site when the wandering hamlet Ströja moved here in the 6th century. 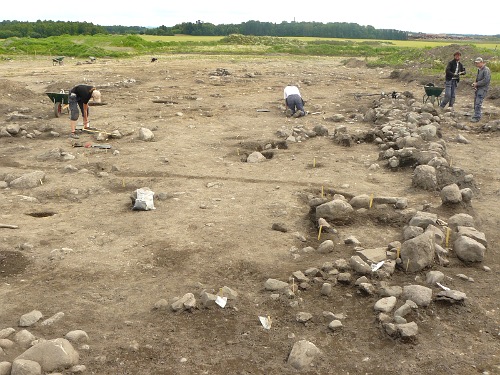 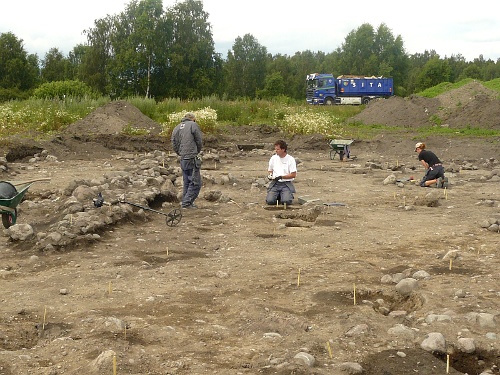 *Update 15 July: I got stuff mixed up: the charred-through post was on another site, and the reason that you sample thrice in such a case is that then you can deduct the confidence intervals of the two older dates from that of the youngest and get a much narrower date for the felling of the tree. What Björn does have so far from the Ströja hall is samples from the outermost layers of three posts that were superficially charred. One of these samples is already at the radiocarbon lab and heading for the accelerator.

**Update 18 July: That stone layer is strewn with human skull fragments! Some are radiocarbon dated to the 8th century! And there are scattered postholes there. It looks a lot like the peripheral crafts site at Herrebro in Borg that I discuss in my book. I imagine that when an old thrall had died and you had fed her body to the pigs, you might put her skull on a stake in the farmstead's ritual precinct...

A Mead-hall of the Eastern Geats Has Finally Been Found

My book Mead-halls of the Eastern Geats appeared last September. On p. 9 I wrote:Splendid single finds, though never surveyed comprehensively, offer a rough idea of where elite settlements might be sought. But little is known about individual elite settlements in 1st millennium Östergötland. Not…

Longtime Dear Readers may remember me blogging about the excavations in my friend Jan Peder's garden last summer. Beside his house is a ruin mound full of heavily burnt and vitrified Medieval-style bricks, and he's gotten funds together to do some excavations there. The original idea was that the…

Lost On A Fieldwork Gamble

Success and failure in archaeological fieldwork is a graded scale. I wrote about this in autumn 2008:My excavation at SÃ¤ttuna has taken an interesting turn. I'm not feeling particularly down about it, but the fact is that we're getting the second worst possible results. The worst result would be…

Current Archaeology #271 has a long interview with Mick Aston of Time Team fame. When asked how he got into archaeology, Aston paints a little vignette of the renowned High Medieval archaeologist, professor Philip Rahtz:[At Birmingham in the mid-60s] Philip Rahtz had just been appointed, and was…

After the enjoyment and education from The Book, I am still a bit shaken and excited that finally one has been found, mixed with some misery about the lack of metal detecting. I think my workmates have definitely classified me as eccentric or going senile, working on airports/sewage treatment plants/whatever by day and then ranting to them about Beowulf and mead halls at after-work drinks. That is when I give them the lecture about Neolithic sites in Hong Kong, and our responsibility as engineers to be vigilant and report any evidence we turn up in the field, which usually gets them glassy-eyed.

Why I should feel this irrational excitement, and maybe also the responsibility - well, a lot is down to you and the educational process here.

Thank you, good to know!

(OT) A review of an anthology about the historicity* of Jesus, also, the blog has a discussion about the pricing of academic books resulting in keeping books like this too expensive for "ordinary" readers.
"Is This Not the Carpenter?" http://freethoughtblogs.com/carrier/archives/1739/
*is this the right spelling?

"*is this the right spelling?"

It should be illegal to dig such a place without a proper metal detector survey.