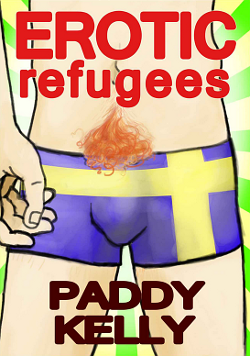 I'll tell you two things up front: this book is my friend's first published novel; and I would have read it with great enjoyment even if I had no idea who the guy was. Paddy Kelly classifies it astutely as “Dick lit / Romantic comedy”: it's Bridget Jones or Sex and the City, only from a male perspective. The plot revolves around the love lives of two young Irishmen in 00s Stockholm: one a neurotic recent divorcé and part-time single dad, the other a carefree ladies man. They've both ended up in Sweden for love, as “erotic refugees”. And here's a freebie for future literature scholars trying to read this as a roman à clef: both main characters are based on the author.

Prose and plotting are tight and snappy, with a lot of good one-liners and no plodding stretches. The dialogue is pretty much pitch perfect: I don't remember catching any false notes. The sex scenes are smutty enough to get your pulse up yet not explicit enough to move the novel into porn country. I must say I felt a little funny, reacting with considerable arousal to a piece of writing by a friend and fellow straight male. But then I thought, hey, he's writing from memory and kindly letting his friends share bedroom situations of yore. Kelly is far too much of a gentleman to leave any clues in that would allow readers to identify the ladies in question. And no hard feelings are really there: it's a female-friendly and wry book where even the psycho ex gets a sympathetic treatment.

Important period-specific motifs in the novel are the dot com boom and on-line dating. An important secondary concern that readers of Kelly's blog and columns in The Local will recognise and appreciate is the humorous and sometimes exasperated commentary on Swedish society from an outsider's point of view. Yet when one of Kelly's characters returns to Ireland for a holiday, he realises that though his years in Stockholm have not quite made him a Swede, they have in fact changed him into something other than an Irishman.

All in all I warmly recommend this novel to men and women alike, particularly those now in their 30s and 40s, and particularly to readers with an active interest in the absurd contortions people go through to get naked together. Ladies, this book offers a candid view of the thought processes of the slightly over-sexed yet civilised male that so many of you know and love. Stockholmers, this is one of our time's best tales of our fine city and the mores of its inhabitants.