Etymologically speaking, ”valkyrie” means ”chooser of the slain”. The job of these supernatural shield maidens in Norse mythology is to select who dies on the battlefield and guide their souls to Odin's manor, where they will spend the afterlife training for the Twilight of the Gods, the final battle against the forces of chaos. After each day's combat training, a mead-hall party with drink and reincarnated pork ensues, with the valkyries waiting the tables.

We have had very few period depictions of armed women. Instead scholars have applied the term “valkyrie” to a common Late Iron Age motif of a usually unarmed woman who offers up a mead cup or horn, sometimes standing alone, sometimes to an armed man, who is often on horseback. A more cautious term for this motif is “the greeting scene”, and there is reason to link it to beliefs about what would happen to men in the afterlife (cf. houris). But there are armed women embroidered on the tapestries from the AD 834 Oseberg ship burial, and a small group of brooches shows them in 2D relief (pictures below). Thanks to Danish amateur metal detectorists, that group is growing steadily. And now a 3D version of the motif has surfaced!

Detectorist Morten Skovsby found the first 3D valkyrie figurine late last year at Hårby on Funen. She wears a floor-length dress and has her hair in the typical knot we've seen for instance on the Lady of Sättuna in Kaga, and she's armed with sword and shield. The interlace decoration on the rear of her dress should permit pretty tight dating once specialists get to see it clearly, but she's definitely from the Vendel or Viking Periods, and I'd say probably from the 8th/9th/10th century.

See also the Lejre Lady. Thanks to Jakob Øhlenschlæger for the tip-off, to Jan Hein and Henrik Brinch Christiansen for the photographs and to Claus Feveile for additional information. 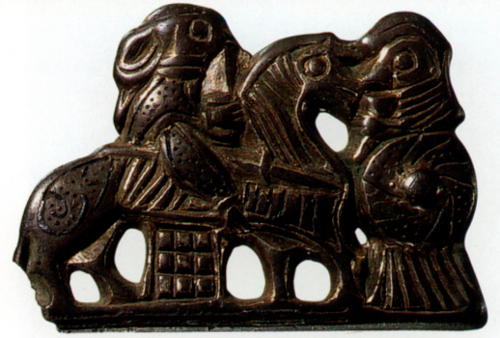 A man on a horse is greeted by a woman with a shield and a drinking horn. Brooch, Tissø, Zealand. Finder Flemming Nielsen. 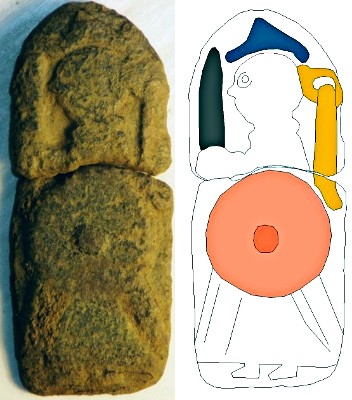 Interesting, most revival depictions of Valkyries give them more fertility-goddess dimensions. Someone seemed to have realized that if you spend all day lugging around several dozen pounds of armor and weapons you're more likely to be on the skinny side.

Great article. I am veey excited about this find. I would just like to correct one thing in the article if I may. The Valkyries, in theory, brings the warriors that Odin tells the to and do not choose them on there own. There are, however, accounts in the Sagas where Valkyries have disobey Odin and choosen to not chosen the warrior she was told to. These Valkyries has always been punish for these actions. I look forward to seeing pictures of the detail of the dress upclose. :-)

I would be very interested in more information about these figures. Thank you for posting them.

Something I find funny about the "Valkyrie" art of the period. The assumption is that they must by mythological if there is art of a female with the tools of war (spear/shield/sword) because everyone KNOWS that women where not allowed to participate in combat. Also when a undeniably female grave is found (based on the skeleton) with weapons in it then the weapons MUST be a representation of some sort of secular authority, they could not have been for using. To the point of when female only items are found in a grave with no surviving skeleton alongside weapons then it MUST be a male grave with female items in it....... I have been cataloging grave finds of this type, for a non-academic paper. Early archeology was amazingly sexist and sadly has not changed too much from then.

Mr. Jed, quite interesting point of view.
Recently I found interesting passus in byzantine chronicle of John Skylitzes. In the chapter about emperor John Tzimisces and his war with Russians (Varagians) in Bulgaria it is written, that Romans found among dead Russian bodies on the battlefield a woman, who was equipped like a men. So there could be something in fact, that sometimes, rarely, women fought side by side with men.
Is there a chance to receive your catalogue, when it will be completed?
Cheers,
MK

@Jed. I thought is was already widespread accepted/known that Germanic en Celts tribes had females fighting ferociously in battle.

@Jed - you need to read Plutarch, Dio Cassius, and Ammianus Marcellinus, to name but a few, re the ferocity of Celtic women in battle. To this day, their female descendants are likely to jump into a fight to guard their man's back - I've seen that with my own eyes!

Jed: When have women EVER done as their husband told them?
In the Sage of Eric the Red there is a mentioning of a woman on Wineland scaring of indians as she loudmouthed flipped her tits with a broadsword!
One thing is when they are dead; but - trust me! - they are an entirely different kettle of fish alive! Wisdom is in this case bought with severe pain!

I personally believe any tale of loudmouthed ill tempered women over epiphanies!

Those armed women in Bulgaria.

The interesting part is that there was a considerable contingent of Viking mercenaries at the imperial court of the Byzantine Emperor. Saxo Grammaticus in "Gæstæ Danorum" mentions a Danish King on pilgramage (Erik Ejegod if I recall correctly - 1060-1103) met with these Væringer in Constantinoble.

If the period fits?

Trust me - if their wifes were anything like the present breed - NOT wearing offensive weapons would have brought down the fashion police!!!

Thx for posting this Martin

Morten is my friend, and we was walking ón one og my fields
Whit some other friends ( Michael Nielsen and Jan Hein) from Harja ( a detector grup)

It is One of Morten's first finds,
From the past.

It is made in solid silver, and wheight 9,2 gram

It was me who found the brooch from Tissø ..

According to the old stories Mrs. Leif Erikson was a terror with a battle axe and a good fighter. When her husband was killed by the Skreelings, she rallied the troops and led the counterattack.

Interesting find. Thank you for sharing this information.

The Figurine From Hårby is a Skjoldmø. Not a Valkyrie

Sikke en fin skjoldmø! What a fine shieldmaiden
Yes! Noth european women have fought in wars (at all times, not as many, as men, by far (maybe their "deathwish" wasnt as pronounced) but they were right there, there were women dressed up as male sailors in Nelson's fleet and female pirates) read the roman authors about the germanic wars, they more or less say , that if was just a "small" war, the women stayed at home, in the "big" wars they fought side by side with their menfolk. The romans were terrified at the thought of being killed by these tall, redheaded furies, whose strong arms went like windmills. The nordic countries to this day is not home to many demure women. It is/was a nordic cultural thing.