My maternal grandpa Ingemar Leander worked as a sales agent of the Swedish Match Company in Punjab in the 30s before he got married. It was the adventure of his lifetime. Here's the story of his that I remember best.

Once when he went crocodile hunting on the river the party was a little clumsy and startled their prey into the water from the sandbank the animals had been basking on. Only one crocodile stayed behind and was shot. This turned out to be because it was in poor health. When they gutted the animal they found that a bone had pierced its stomach from inside.

It was the arm bone of a woman that the crocodile had eaten. The flesh was gone from her arm but her hand was intact. And so were the copper bracelets around her wrist.

I don't know what the hunting party did with the woman's arm. 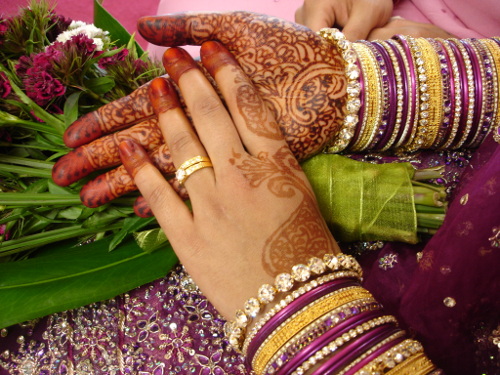 March Pieces Of My Mind #3

I like this illustration. Note the spirals in the woman's hair, repeated in the clouds. Also the hint of post-nookie intimacy suggested by this being *breakfast* tea. Been helping Jrette study French for a test. Love making up absurd sentences for her to translate. "On my right is Charlemagne.…

"Horned" crocodile may have preyed upon prehistoric humans

A Cuban crocodile (Crocodylus rhombifer), photographed at the National Zoo in Washington, DC. No one knew what happened to William Olson. At about three in the afternoon on April 13, 1966 he had been swimming with his friends from the Peace Corps in the part of the Baro river that ran through…

One frequent motif recurs in creationist email: they may believe in god, but they don't believe in paragraphs. This one also hits another frequent theme: the racist creationist. Oh, and an obsession with incest. The following story is what I believe to be the truth, the whole truth and nothing but…

A strange case of presumptive rabies

Rabies is one of those diseases that scares the crap out of me. Once clinical symptoms start, it is essentially a death sentence. "Essentially" because there are 6 cases of survival in the medial record, but 5 of the 6 had had rabies vaccination prior to illness. A single case of survival in an…

I thought they were named "Skanderna".

-Sadly, people back then could not afford metal buckets that you could hang from long poles to collect water without exposing yourself to risk. Not exotic, just ordinary poverty.

Yes, but “Skanderna” is not a proper Norwegian name.
I borked the link: http://www.thelocal.no/20130916/norwegians-give-scandi-mountains-a-new-…
( OT)…and you don’t need to travel to exotic countries to risk demonic possession: 51% of Americans think Satanic possession is a fact. http://today.yougov.com/news/2013/09/17/poll-results-exorcism/

I once heard the First Aid Kit sisters perform "Satan Is Real" live in their interview mikes on radio. Priceless.

This story fits the trope of "heroes go on a quest, kill monster/fight evil guys".
Nowadays we are stuck with "heroes drive across the mountains, face the Norwegian tourist guides and beat them at poker".

Matches are not hard to make. I'm surprised that there was a market for imports from Sweden.

Safety matches were a Swedish patent.

I still have a box of Swallow Brand Säkerhets Tändstickor, made in Malaysia under licence from Swedish Match J.V.

I just found out something I never knew before, despite a lifelong familiarity with their existence - the ubiquitous Redhead brand safety matches marketed in Australia are a Swedish Match brand.