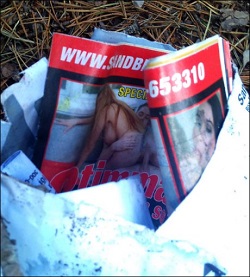 Haha, wonderful to think that some of these guys (?) may in reality have had quite permissive wives but still felt they needed to be sneaky about it.

I have no idea if there is a wood outside the record studio, but here is a Xmas song by The New Pornographers "Joseph, Who Understood" http://www.youtube.com/watch?v=5nOm81MqeCI

Maybe you should adapt this tradition to modern times and start up "Adult Geocaching".

I invented geoshagging back in 2005!

When I was young and a completely closeted gay guy, a long long time ago, I bought some muscle mags and after ogling them, deposited them in the woods maybe a kilometer from my parents’ house.

Excellent Jon! Did you ever check back with the mags afterwards?

G, I like the way you're thinking! Reminds me of this Swedish comic where used condoms and used tampons meet in the sewers and breed underground monstrosities together.

this would be the location
https://mapsengine.google.com/map/viewer?mid=z-XcLJxZXeFE.kS_NTtnNT-II

Urban, when the aliens arrive long after we are gone and start digging they will be very confusedd about our culture.
Steve, here we go: http://www.democraticunderground.com/10023578352

"they just don’t want their offspring to sprout in a landfill. "
See Zelazny 's old book "Jack of Shadows". the place where they get reborn is not pleasant.

This stuff occupies many ecological niches.
Doing survey & assessments in advance of (something or other, I forget, trees, phone masts, pylons, long time ago), on top of a horribly cold, exposed and windblasted fell in Scotland. By a sheep-sized erratic boulder, expertly packaged and weatherproofed, a few kilos (sort of ATX-box size) of what were, for the time, very recherché German magazines.

I mean what? Who the .. ? How the .. ? Just getting up there with the theodolite each day half-killed me, never mind getting it up for a ham-shank, out on the freezing shelterless tundra.

We were actually seriously worried it might be some sort of Provo munitions cache (all that was in full swing at the time, big military bases down below), so Mr Silly here decided to have a shaky-handed look (you never know who might be watching; down a scope).
Oh, the hysterical relief! Thank christ! It's OK people, it's smut, not semtex! (mass outbreak of hilarity and hugs all round).

Dustbubble, that takes me back to the Cold War days, when any unusual phenomenon might have something to do with the Russkies.
I suppose the images could contain some kind of logic bomb, transmitting into the brain through the optic nerve and making the system crash....

Now then Birger, even I could see that those trim, tanned Teutons were very definitely not transmitting things via the eyes. Quite the reverse ...

And forgotten bags in pubs and the like still scare the crap out of me, and I tend to leave. Without saying anything, because I know it's a bit mad.

And if you find heroic warriors of Middle-Earth suspiciously homoerotic:
"Cloudy, with a Chance of Nazgûl: Climate Maps of Middle-Earth" http://bigthink.com/strange-maps/634-cloudy-with-a-chance-of-nazgul-cli…