Escape from a black hole? Not in this Universe (Synopsis)

"Not only does God play dice, but... he sometimes throws them where they cannot be seen." -Stephen Hawking

The New York Times ran an article on Stephen Hawking promising there was a possible escape route from a black hole, after all. In the text, Hawking asserts,

"They are not the eternal prisons they were once thought. If you feel you are trapped in a black hole, don’t give up. There is a way out." 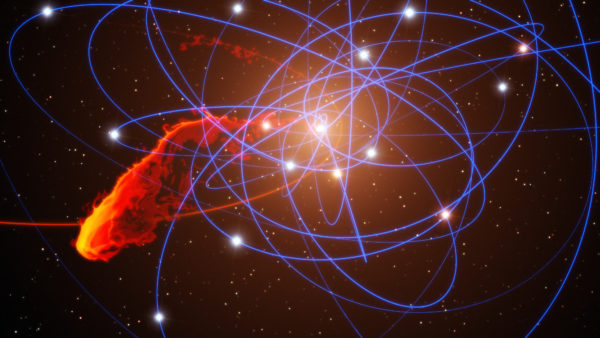 While it might appear that matter escapes a black hole, this is only from matter well outside of the event horizon at all times. Image credit: ESO/MPE/Marc Schartmann.

But what the actual scientific paper says is very different from that. Not only is there no way to escape from a black hole, the only new information provided is that, perhaps, there's a mechanism that may lead to information about infalling particles becoming permanently encoded on the black hole's surface, and then becoming a part of the outgoing Hawking radiation many ages of the Universe later. 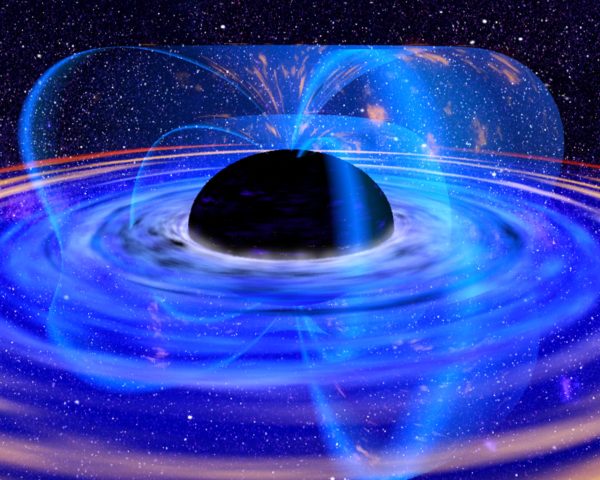 Sorry, Stephen Hawking fans; you can't escape from a black hole, at least, not in this Universe.

Q & A: How can anything come from a black hole?

"Consideration of particle emission from black holes would seem to suggest that God not only plays dice, but also sometimes throws them where they cannot be seen." -Stephen Hawking Last week, I wrote about how high-energy cosmic rays strike Earth's atmosphere and wind up bombarding everything on…

10 things you should know about black holes (Synopsis)

Earlier this week, Stephen Hawking shook up the world when he announced that he had uncovered the solution to the black hole information paradox at a conference in Stockholm. When particles fall into (or create) a black hole, information is encoded on the black hole's surface, but when the black…

"Put two ships in the open sea, without wind or tide, and, at last, they will come together. Throw two planets into space, and they will fall one on the other. Place two enemies in the midst of a crowd, and they will inevitably meet; it is a fatality, a question of time; that is all." -Jules Verne…

Is it possible to shoot an entangled particle into a black hole and observe the local particle?

“Escape from a black hole? Not in this Universe”

I thought I saw the same headline in an article about the deteriorating state of Venezuela or Syria.

Or maybe it was Baltimore or Chicago.

“Escape from a black hole? Not in this Universe”

I thought I saw the same headline in an article about the deteriorating state of Venezuela or Syria.

Or maybe it was Baltimore or Chicago.

Hey, I know a lot of friendly spades. Let me know when you're in Chicago; I'll be more than happy to leave you to your own devices introduce you around.

@MP #1: I don't see why not. There's no information transferred by doing so, so there's still nothing getting out of the event horizon.

And when that threshold is crossed, everything collapses down to a singularity at the center.

There are those that say physical infinities are just an artifact of the unfinished character of a theory. Sabine Hossenfelder pointed out that fluid dynamics also mathematically predicts singularities, but in reality those fluid singularities are discovered to be an artifact of using an approximation and not real which begs the question:

Do we have any evidence of there existing in our universe anything that is truly infinite?

@5: yep. There's IMO a parallel here to the black body problem (ultraviolet catastrophe). The nonsensical prediction of a physical infinity at the center of the black hole may be a result of our incorrect classical theory of gravity, the same way the nonsensical prediction of infinite energy radiating from a black body was caused by our incorrect classical theory of the electromagnetic force.

"Do we have any evidence of there existing in our universe anything that is truly infinite?"

It's inexhaustible, at least.

Until we discover that it "really doesn't" have an infinity, all we know is that some infinities appear to be valid. Because we don't prove models correct, we *prove* models, testing them *until they fail*, and then get a new one.