I drove down to Norrköping Thursday morning to look at two small Medieval castle ruins for my new project. The one at Landsjö in Kimstad is difficult to reach because it's on a small island in a lake where nobody keeps a boat. So I had bought one of those big tractor-tyre things (that people tug after their motorboats) and a hand pump, and borrowed a kayak paddle from my dad. Turned out that the textile sheath that forms the floor of the ring I was sitting in was anything but watertight, so my bottom got soaked in 5°C lake water. No matter, I was thrilled to get out to the island, which is high and steep and overgrown. The visible masonry is in very poor shape due to erosion and quarrying, but there are enormous amounts of collapse material that can cover pretty much anything. The second site, Ålborgen in Vånga, is in way better shape: partly because it hasn't been roofless for quite as long as Landsjö, partly because it's been restored, but mainly because it hasn't been quarried much. 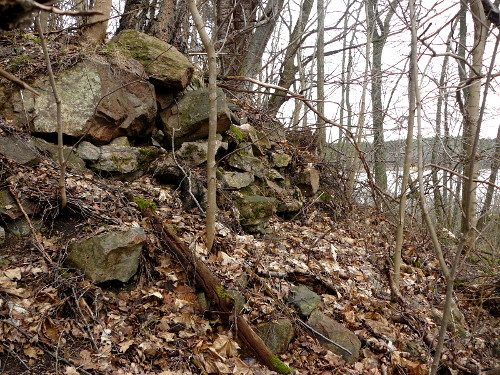 One of the better-preserved (!) parts of Landsjö Castle's perimeter wall

Quarrying is in fact the typical fate of ruins. The idea of preserving them in a ruinous state arises in the 18th century. All sensible people see a ruin as either a quarry or as a building that should get a roof and quit being a ruin. The people who order the quarrying or give permission for it are always the owners. You wouldn't just give away building material for free!

The natural fate of masonry ruins is to erode until they cover themselves in their own collapse material. The moment you remove the collapse material this process starts anew. Today's cleared-out visitor-friendly ruins are in a highly volatile state. Sooner or later they will either get new roofs or the upkeep slips and they will collapse again.

Very cool, Martin, thank you for posting these. What would be meant by "castle" in this context? A stone enclosure to hold livestock, a large stone house with some defensive features and maybe called a borg, a stone manor house with outbuildings and a gatehouse, or a keep-and-curtain-wall thing? Is there anything typically Scandinavian about them? Most castles in Scandinavia I've seen in pictures are mostly later structures built for artillery. I'd love an image of a real Swedish medieval castle.

A castle in this context is a fortified masonry building, Sw. borg. The particular ones I'm studying are keeps with curtain walls. I guess the typical Scandinavian trait is that most are smaller than what you get in e.g. Germany. Glimmingehus is a well-preserved Late Medieval moated keep in Scania.

O ar. The Glimmingehus is like a bastle house on steroids, halfway to a peelhouse or a towerhouse.
As the wiki confesses :-
"Although considered comfortable for its period, it has also been argued that Glimmingehus was an expression of "Knighthood nostalgia" and not considered opulent or progressive enough even to the knight's contemporaries and especially not to later generations"

The gnarly internal shooting-gallery aspects, far and away more obsessive and paranoiac than even the most bloodthirsty contemporary mainland laird's stronghold, are reminiscent of mad Gilbert Balfour's secrit-supervillain island lair at Noltland on Westray.
I guess the ideas came the same way as the annual herring fleet. Or the way that Bothwell later went to Anna Tronds, and finally Dragsholm.

That pomo interpretation, where Glimmingehus would have been built sort of like a stage set for a historical drama, infuriates people who want to know about actual Medieval siege warfare. I can't really comment, though I note that the building is just barely Medieval. It was finished when Gustavus I was 14, and he went on to become Sweden's first post-Medieval king.

What a fascinating place. It could just as easily be interpreted as a culmination of medieval castle technology, the excesses apparent only in retrospect. It's like those people who try to say that hill-forts are more about status. I find it hard to believe the builders, whose intent is all that matters for interpretation, didn't derive a sense of security from the defensive features of the building.

I don't know enough to have an opinion really, but I've read that given how newly built state-of-the-art castles looked in 1490s Denmark, Glimmingehus is oddly archaic.