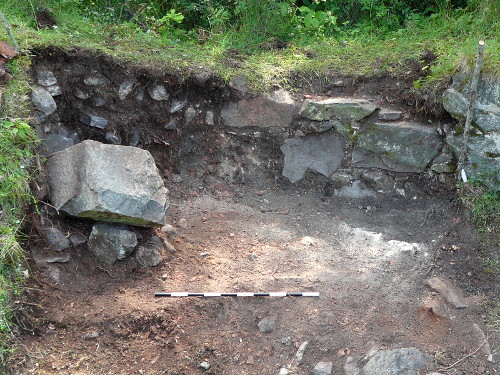 Stensö castle, trench C, the part along the perimeter wall. Note the ashlar.

Drove down to Vikbolandet on Sunday night with my excellent colleague Ethan Aines from Stanford, and we were met at expedition HQ by seven of my Umeå students from last autumn semester. Very pleased to see them again! They've just finished their second term and several are scheduled to go on to the third. So I'll be seeing them in the halls in September when I take on my second batch of Umeå freshmen, and if I'm lucky I'll get to supervise a few of them for their BA theses. Everyone's being charming and nobody complains about dorm life. Last night I taught the team Qwirkle. This morning there was a big mouse in one of our traps in the kitchen.

We started work at Stensö castle on Monday morning, clearing the walking path of a few storm-felled trees and laying out three trenches. We're the first archaeologists to break turf here, true to my modus operandi. I don't have contract archaeology's resources, but I have the freedom to go where I will for fieldwork (except so far the peripheral innards of the Sättuna barrow, the only time I've had a permit application turned down, which still irks me), so I select sites that will never be touched by highway projects and which are not already well explored and understood.

Trench A is on the flank of the mound that marks the castle's assumed northern tower. No masonry shows through the turfed-over rubble here. The trench aims to answer the question whether the northern tower was planned and built along with the perimeter wall when it was added to the site. If so, we can expect to find stones projecting out of the tower wall's face to anchor the perimeter wall – which has been demolished along this stretch and is not currently visible.

Trench B is between the two towers and aims to answer the question where the perimeter wall was on this stretch.

Trench C is in the south-east part of the bailey against the perimeter wall and aims to answer the questions what sort of buildings stood there and what they were used for.

So far we're just moving rubble. It contains a few humongous gneiss ashlar (Sw. gråstenskvader) which we cannot lift and don't want to get crushed by. I'm thinking we can probably drag the ashlar out of trench C with a pulley anchored to a tree. Getting a mechanical excavator to this hilltop site in the woods would cost too much. This is only a problem in trench C where the goal is to get beneath the rubble and into a Medieval culture layer.

We've already made an interesting find. Trenches B and C have yielded a small amount of deformed vitrified brick that attests to a fire on site. These secondarily burnt bricks may come from the top part of the perimeter wall. Perhaps there was a wooden walkway along the inside of the wall, it got torched and some of the brickwork got messed up. There is no written evidence for any attack on the castle, but rebellion leader Engelbrekt's forces took nearby Rönö castle in the 1430s and Stensö was not far out of their way. 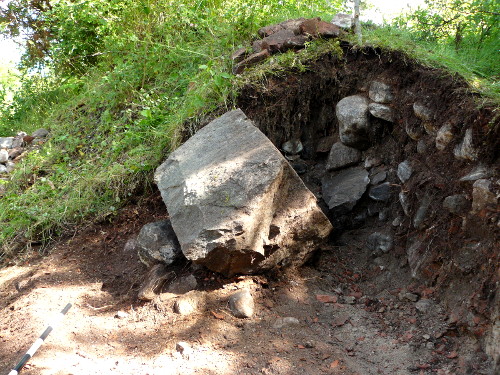 Will you visit this place as well?

Thank you for the pictures Martin this is just like Time Team, and I say that as a big fan! High hopes for the medieval culture layer! I was astonished that you mentioned bricks but a little googling tells me they are far from unknown in northern European architecture from the romanesque on. Enjoy the well-earned pancakes!

Phillip, yes certainly, we spend all our free time at the nudist camp!

Thomas, the kastal tower that forms the oldest part of the castle is probably 1200 +/- 30.

The castle was long abandoned in 1719.

Kevin. I did not read the information. I only looked at the pricture of the castle, but the description must refer to something else.

@Kevin: I ran that sentence through Google Translate. There was an article published in 1949 in one or more newspapers in Norrköping about a structure at Stensö built in 1719 for the protection of Russians and later burned by the Russians (at least, that's what Google claims). As Martin says, this definitely isn't the castle. Whether it's a different structure in that vicinity, or something built in a different place called Stensö, isn't clear.

Thank you Eric my horrible scandy is to blame, I saw the burning and got excited.