Balancing available labour and a pre-decided excavation agenda against each other is not easy, particularly when you're doing investigative peek-hole fieldwork on a site whose depth and complexity of stratification you don't know much about. At Stensö we had two of three trenches and all five test pits backfilled in time for Wednesday lunch's on-site hot dog barbecue. Ethan Aines, Terese Liberg and three students stayed on to finish trench F, while myself, Mats Eriksson and six students moved to our new base at Landsjö Manor.

Trenches D and E and the test pits produced no big news after my last report. Trench F inside the tower yielded a neat midden of bones and abundant large potsherds just below the stairwell. Ethan suggests that there may have been a few wooden steps here, providing a convenient spot under them to sweep trash. I'm itching to get the pottery cleaned, classified and dated. In fact, I'm itching to learn Medieval pottery in more detail. We also got a funny domed sheet copper lid that looks like it might belong to a pitcher or beer stein. It was partly encased in stalagmite, so we can't see all of it yet. 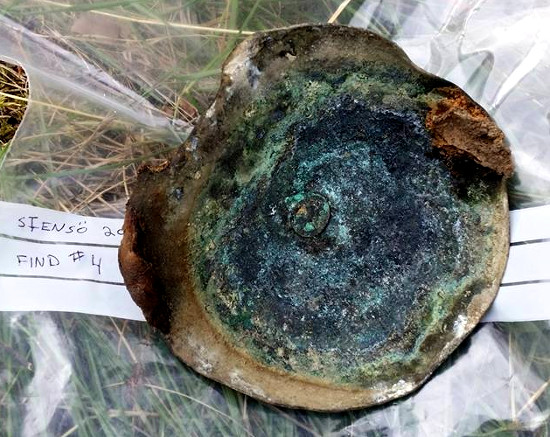 I think I've finally figured out where the west reach of Stensö's perimeter wall is, and why we found it in trench A but not in trenches B or E. Now that I've seen it I don't know how I missed it. There's a low but very wide strip of rubble all around the NW, W and SW sides of the southern tower, clearly separate from the tower and at such a distance (5-10 m) that the rubble can't have originated with the tower itself. In parts this rubble strip has quite a high and steep outer face. I'm pretty sure this is the robbed-out remains of the perimeter wall. I've planned it now but I didn't have the foresight to apply for a permit to section it.

On Thursday the Trench F Five worked two hours' overtime backfilling while getting fried by the sun inside the roofless tower. They must have been exhausted. I told them by phone to hit the pizza place afterwards, have a sleep-in and get their stuff packed up in a leisurely good time. When they arrived at Landsjö on Friday afternoon they were in good shape. By this time we had also been joined again by our excellent friend from the Kimstad Historical Society, Curt Andersson. On Monday I expect another friend to join, so there will be fifteen of us.

We need another boat! Because that's how Landsjö Castle on its semi-landlocked islet is most conveniently reached. We're digging three trenches at Landsjö: trench F inside the NW tower, trench G across the assumed line of the missing SE reach of perimeter wall (I have a new-found appreciation for why Victorian antiquarians always had their workmen follow walls around), and trench H on the odd rubble mound separated from the castle by a dry moat. Superficially it shows a quarry pit and the remains of a big badger sett, but I reckon there's probably a gate tower under there as well. 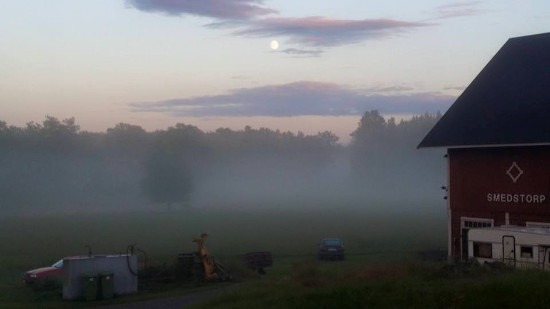 Great update, thank you, the lid is pretty cool. You wonder who drank out of that, some lord or peasant -- but there I go wool-gathering again. I hope you find your gatehouse, I love reading this stuff from the field.