Second Week Of 2015 Excavations At Landsjö 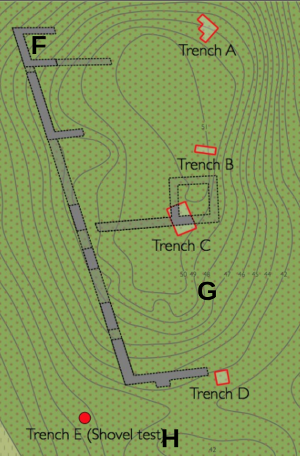 I write these lines on the day after we backfilled the last two trenches at Landsjö, packed up our stuff, cleaned the manor house, hugged each other and went our separate ways. It's an odd feeling to take apart the excavation machine while it still runs. It's been four fun and successful weeks!

Since my previous entry, written on Monday evening, we've done only three days of further excavation. Our main findings, to the extent that I have any comprehensive overview of them at the moment, relate to the culture layers sitting between the natural subsoil and the rubble in trenches F and I. The latter in particular yielded some interesting bits: a spur (yay chivalry), a copper alloy decorative mount shaped like a rose, a large iron key, two knives of which one has a beautifully preserved bone handle, and a single lovingly shaped and smoothed limestone flag that had ended up upside down and cracked on the floor of the basement in trench I. Both trenches also finally gave the pottery I've been waiting for, Medieval red wares.

Having dug just inside the perimeter wall we got a good look at it at two points. The northern reach in trench F is 120 cm thick, standing on a base that is 160 cm thick, sturdy work. But in trench I there is barely a perimeter wall at all. It has no widened base and sits partly on yellow sand, partly on sloping bedrock, quite flimsy. This wall along the western edge of trench I (on a stretch between a crevasse and a big glacial erratic boulder) is clearly just part of a building and has not been laid out as part of the sturdy perimeter wall encountered in trenches C and F. This reinforces the picture we're getting of an unfinished stage set of a castle.

Trench H ended up giving a beautiful posthole packed with re-used mortar-stained rubble. This post-castle feature suggests that much of what we've been looking at in the trench has to do with the 18th century smallholder's activities on the island. A shed or barn is drawn just west of trench H on the 1730 map. We've also identified the foundation of his home, just east of trench F at the islet's highest point: a flat rectangular surface with foundation frame stones visible above the turf at two points in the western and southern walls, and a typical rubble mound from the stove and chimney at the northern wall.

Now I'm going to take a few weeks off, and then post-ex work begins. Stay tuned!

The weather has been pretty good! Only one day of heavy rain in four weeks. Bright sunshine isn't ideal because a) you get dehydrated, b) the soil dries out so you can't tell one layer from the next, and clay simply goes rock solid, and c) you get leaf dapple and dramatic shadows in the photographs.

A good month's work. Not to be demanding, but a scale on the map would be very informative, although I could probably estimate it reasonably well from photos.

OT: "Give me your daughter." One of the Anglo-Saxons was a Celt.