A little archaeological conundrum found its solution this morning. At an excavation in Motala in the early 00s, colleagues of mine found a cupped piece of hard, greyish brown material with a distinctly patterned inside. They interpreted it as a piece of a lost-wax casting mould and suggested in a 2004 publication that it was for a Viking Period tortoise brooch. I've never seen the find live, but I could tell from the pictures that the pattern was certainly not from the Viking Period. I wrote in my 2011 book about the area (p. 119), “the object in question has a shape and a geometrical decoration style that is quite alien to the Viking Period, and must belong with the considerable amount of High Medieval material also found on the site.” Later another similar piece was found at a nearby site, but nobody's found a good explanation for what was cast in these moulds or when.

Now it turns out that everybody who's commented on these objects, including myself, has been wrong. My hugely talented and versatile colleague, archaeobotanist Jens Heimdahl, cracked the case.* His doctorate is in quaternary geology, and he's studied palaeontology as well. Jens explains that the cupped brown thingies with a geometrically patterned inside are in fact fossils of Ordovician echinoderms of the genus Stichocystis! We were all fooled because these are concave casts of a domed animal. Had it been a fossil of the beastie itself, then there would have been no confusion. 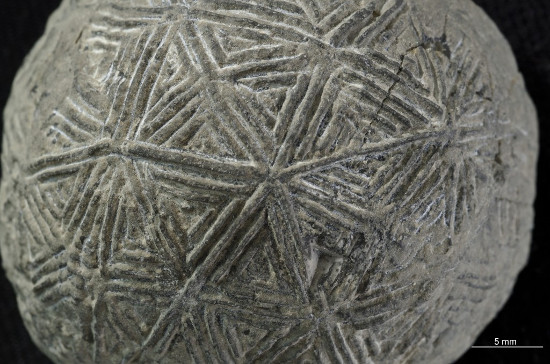 "The process of identifying the echinoderm was complex and the credit should not go to me. The material was recognised as sedimentary rock rather than clay by ceramics specialist Ole Stilborg, who suggested that the imprint might be from a fossil. Archaeologist Katarina Sköld looked among pictures of sea urchins without finding any parallels, and then sent pictures to me. I confirmed the suspicion of a fossil echinoderm, but was more broad in my guess, suspecting perhaps some kind of crinoid, which sometimes have similar surface patterns. I sent the picture to the palaeontologist Jonas Hagström at the Natural History Museum, and he made the identification. I just had the honour of presenting the result."