News from the Moon!

"We can continue to try and clean up the gutters all over the world and spend all of our resources looking at just the dirty spots and trying to make them clean. Or we can lift our eyes up and look into the skies and move forward in an evolutionary way." -Buzz Aldrin

Sometimes, you go away for one weekend and you miss out on some awfully big news. So while I was competing in the USA Beard & Mustache championships (and I -- along with everyone else -- was put to shame by Willi Chevalier), some amazing news came back from our closest astronomical neighbor. 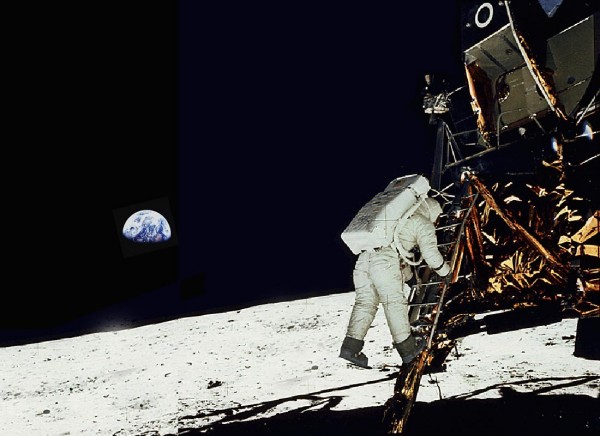 Back when the space race was in its heyday in the late 1960s, it became clear that the United States was going to beat the Soviet Union to landing a man on the Moon. (That's Neil photographing Buzz, above.) But that didn't mean the Soviet Union wasn't going to do something spectacular in their own right.

In 1970, they launched and landed the first-ever rover on another celestial body. (The famed Mars rovers, Spirit and Opportunity, owe an awful lot to this.) What was it? 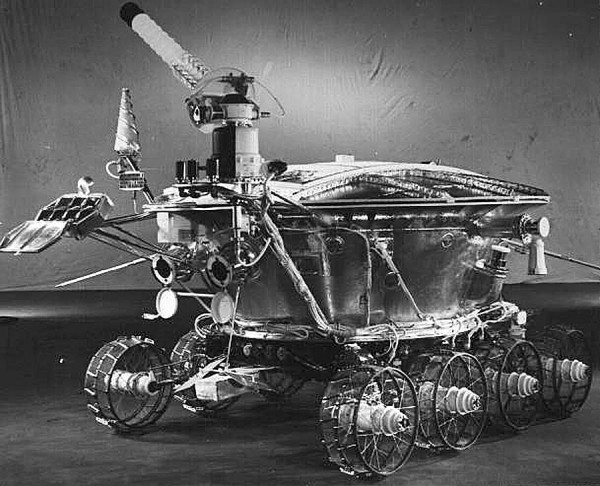 Say hello to Lunokhod 1, which became the first remote-controlled robot to land on another rock in our Solar System. Lunokhod 1 landed on the Moon, brought there by the lander Luna 17, and immediately went to work.

Lunokhod 1, initially slated for a mission of just under 90 days, lasted 11 months, traveled over 10 kilometers and took over 20,000 images and over 200 panoramas. It also became the first vehicle to photograph its own footprints, which fascinates me for some reason. 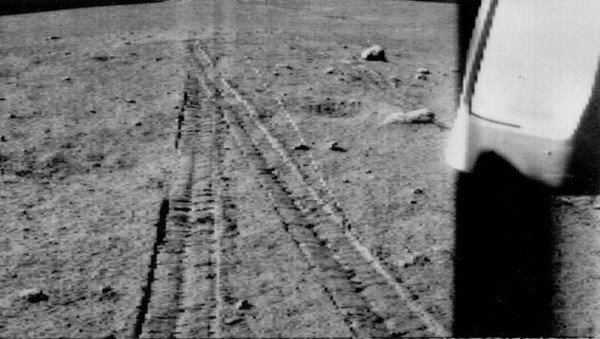 And on October 4, 1971, Lunokhod 1 was declared dead after repeated attempts to contact it were unsuccessful. 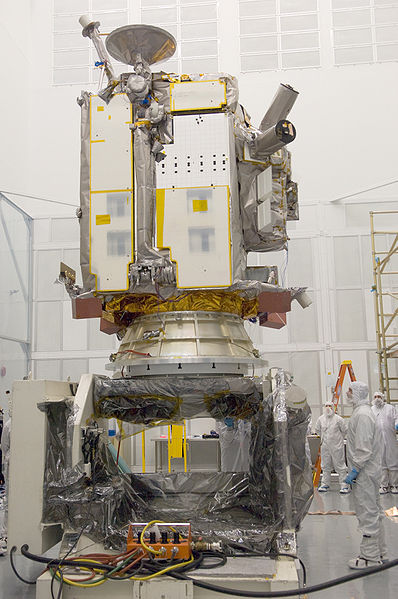 Fast forward now to 2010, where NASA's Lunar Reconnaissance Orbiter (above) has been orbiting the Moon, taking extraordinarily high-resolution photos.

And then it took this one, where you'll notice there's a tiny little white blob. 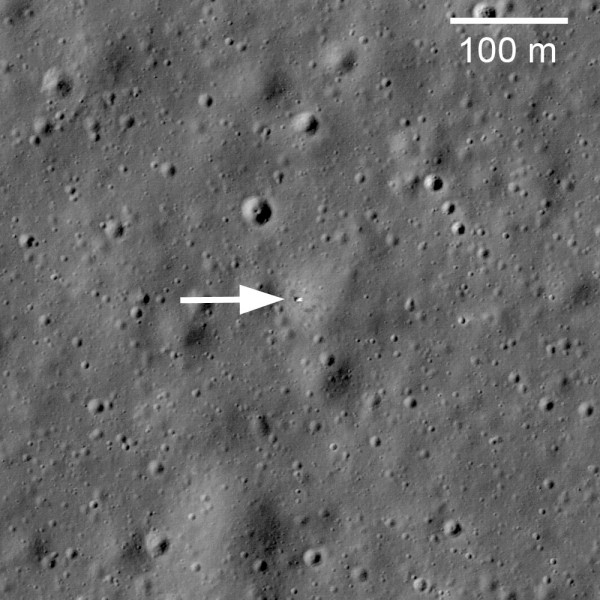 What is that white blob? Let's blow it up as much as we can.

Surprise surprise, they found Lunokhod 1! And despite having collected 39 years worth of lunar dust, they decided to perform the ultimate test on Lunokhod 1.

Shoot a laser at it!

No, really, shoot a laser at it. Here's why. On all of these rovers and stations, they placed one of the simplest types of reflectors: a corner mirror. What's so special about these? Well, all you need to do is hit it, at practically any place and at any angle, and it will reflect whatever light you shone on it back, perfectly parallel to the original beam! 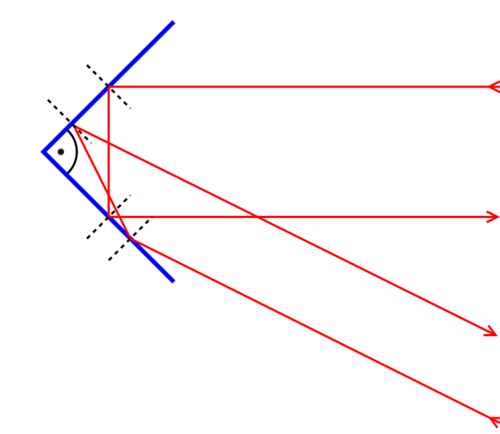 So they shone this laser at Lunokhod 1, and the reflected signal was so strong they can see it during daytime on the Moon!

So right now, at this moment in time, we can measure the position of the Moon to within millimeters, the most accurately we've ever been able to measure it! And why? Thanks to rediscovering a 40 year old piece of Soviet junk.

Were might one scrutinize those â20,000 images and over 200 panoramas?'' Are they available to the masses or only the Party Elite?

Lunokhod 1 HAS to be at least some of the inspiration for WALL-E.

That's funny. They just did this in a recent episode of "The Big Bang Theory". (Shining a lazer on a man-made object left on the moon) I wonder if Lunokhod gave them the idea?

I am a member of Moon Zoo and we are using LROC images to map and explore the Moon and I BELIEVE that it was one of our Russian members that first reported their long-lost spacecraft, a member named The Thing. You can help us, too. Visit us at moonzoo.org.

Iâm sorryâ¦I couldnât help it. Itâs just that the photo of the lander itself made me think of Hollywood depictions of 19th Century technologyâ¦maybe Jules Verneâs time machine. If only the above-ground swimming pool in the middle were made of wood.

OK, now that Iâve gotten that out, I can get back to what the post is really about.

Hope you won the competition.

Shooting laser at moon...humm! reminds me of that episode from Big bang theory.

Soo... what is the exact distance to the mm?

If you just click to expand the picture, is that a "face" located about 150 Meters at 50 degrees or so from Lunokhod 1 or what? Perhaps the martians once again...?

39 years of collecting lunar dust, and still shiny. Might that have to do something with the lack of atmosphere to move the lunar dust?

When I seen the title of this post [News from the moon!]I briefly thought to myself (I thought he went to a contest only 150 miles away)
;?)

When you *seen* the title? Hyuck!

I hate to be that guy, but why is the first picture photoshopped? The left half of the sky is black, and the right half is dark blue, and there is a square of a different color black around earth.

@John Mars:
It's okay to be that guy, because you are right. It looks like the earth may have been rotated. The sun would have been directly overhead to the astronauts.

Oh sweet lord, is anonymous a troll who is trolling the original troll (john mars. I'm not even going to get involved in case I'm feeding them both... ach, what the hell, you're both twats with maggots for brains, go learn some elementary astronomy.

That quote is easy for buzz to say.. he went to university, has degrees, a safe income, a pension etc etc

That shortsighted ASStronaut should spend a week in my f*cking neighbourhood.

I've always been fascinated by corner mirrors in restaurants - no matter where you are in the room, you can always see yourself in any 2 mirrors installed adjacent to each other in a corner.

Good article, but I don't think it's fair to end it with "...a 40 year old piece of soviet junk". On the contrary, it's still doing useful science after 40 years, albeit passively!

A rediscovery of a 40 year old piece of Soviet junk has been put to good experiment.

Americans look at old equipment no longer functioning in their original intent as *junk* such as old cars *junkers*. However since the mirrors were eventually used for it's original purpose, then I would say that it's not exactly junk...actually all the rest of the *junk* left on the moon may also come in quite handy someday.

I still remember that the moon discover was a really big thing when I was youngster. Since yesterday was the aniversary of Juri Gagarin's flight into outerspace, I have started to read a lot of facts about the last missions and the big milestones that happened from the first flight to the moon until today. It is very interssting story to see how far we have advanced during the last 60 years. Looking back on the start of the Nasa I'm very curious how far we will be in 60 years from now. Greetings matthias from Germany

The first foto is not only photoshopped but a complete fake. The original picture of Buzz Aldrin coming off the laddder does not show the Earth, which stands much higher in the sky as seen from the Apollo 11 landing site.
Actually, the picture of Earth as shown in this photo originates from the Apollo 8 mission!

Ok, so the first photo is photshopped but where did you get it from? Mark